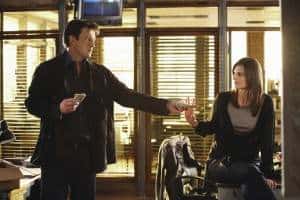 I don’t think there has ever been a cooler case for a writer like Richard Castle than a psychic who predicted her own murder. Last night’s episode 3.02 ‘He’s Dead, She’s Dead’was just so much fun to watch and full of jokes (even inside jokes; Nathan Fillion throwing double rainbows into a scene made me laugh out loud) as Castle tried to convince Beckett of the existence of paranormal activities such as clairvoyance.

It all started when a young woman named Penny Marchand walked into her mother Vivian’s apartment and was surprised when she didn’t find her there, but found a large blood stain on the carpet. Her first reaction was to try her mom’s cell phone, which she heard ringing inside the pull out couch. She found the phone alright, but she also found her mother’s body with an ice pick protruding from her neck.

Beckett’s team is called in and she calls Castle, who has just heard from his own mother that Chet has proposed and has given her a giant diamond ring. Martha isn’t sure she wants to marry him and eventually decides to break up with the poor guy. Castle, leaving his mother to her own issues, meets Kate and the boys at the crime scene and is surprised to see that the victim was Vivian Marchand, a famous psychic/medium in New York. He even tells them that she predicted once that a beautiful woman would move into his loft and live with him forever. Beckett looks up at that, interest picked, but rolls her eyes when he says Vivian had neglected to mention that it was his mother. 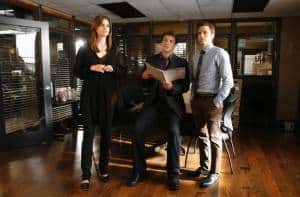 He proceeds to discuss the difference between psychics and mediums with Ryan, but Beckett intervenes and says that in the end they’re all fakes. She even calls on Castle, surprised that he would be so gullible as to believe that kind of thing. While Beckett interviewed Vivian’s daughter Penny, Castle points out that he remembered this one case in which Vivian had helped catch a killer because of a vision. Penny says that her mother had helped put away over a dozen people in the last ten years all over the country because of her abilities. Kate is skeptical about that, but decides to look into all those people Vivian had helped put behind bars and see if any of them were out and still holding a grudge.

Back at the precinct, they interview Vivian’s last clients Paula and Marina Cassias, who were there to commune with their husband and father Emilio Cassias — who had passed away a few months before — and had gotten a good look on the man who had been seen leaving Vivian’s apartment around 2pm the day she died. They describe him as a dark haired man, going gray in the temples; he was wearing dark clothes and had a scar on his face. His name was Albert or Alfred and he seemed really upset.

Turns out that this man was Albert Moreno, a gangster and one of Vivian’s clients. She had told him that if he got into the real state business he would find true happiness. So he did as she said and ended up losing everything. Thinking they had a suspect with a strong motive in their hands, Beckett and Castle go to his house to talk to him. When they get there, they find him with a real state broker and he tells them that he went to see Vivian on the way to see a broker to sell his house that day. He was upset because she had lied to him and she said that he should give the universe a chance to right itself. Since he was late to meet with his broker anyway, he let it be. However, when he got to the broker’s office, he met his broker’s partner, who just happened to be his high school sweetheart. They started their romance again right away and he had never been happier. 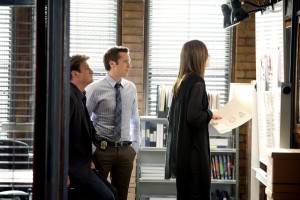 That just gives Castle more ammunition to try and convince Kate that Vivian was a true psychic and not a charlatan like she believed. Then he asks her if she believed in fate, soul mates, fairies, double rainbows and was disappointed when she said she didn’t believe in any of that. When they get back to the precinct, Ryan and Esposito tell them that they found tons of research material among Vivian’s things, including autopsy files. Beckett teases Castle that that was how she knew so much about her clients: through research. Castle gives up and leaves, mumbling disappointed that he’s surrounded by skeptical people.

In the following morning, they’re still looking into Vivian’s list of people she supposedly helped convict and Ryan says that he contacted the police departments who had made the arrests and they said that they had never even heard of Vivian Marchand. Kate says that’s proof that Vivian was a fake and she would even bet her badge on it. Although, before they could formalize the bet, Esposito shows up with another piece of evidence: a letter that had been posted the day Vivian died and arrived at the precinct that morning, written by the psychic herself. The letter said that she felt her murder was imminent — cue Castle squealing like a teenage girl — and that she had had a vision of her death and that in the vision she couldn’t breathe, saw the numbers 7, 5, 1 and 8, a man dressed in black and could hear a furious pounding coming from far away.