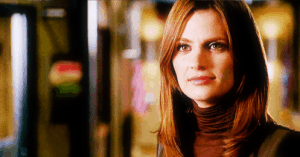 So the plot thickens and Beckett and Castle go pay CalderÃ³n a visit the next morning. CalderÃ³n says he is a huge fan of Castle’s books and cooperates with the investigation. He is shocked and devastated after hearing of Dr. Monroe’s murder. When Beckett asks what his relationship with her was, he explains that he had a heart attack six months ago and Valerie had been his private physician since then, which explained her sudden financial increase. Beckett shows the picture of Valerie leaving the hospital with mystery man, but CalderÃ³n doesn’t recognize him. His brother Manoel, however, says that he has seen the guy several times in a diner close to Valerie’s home and she used to meet up with him all the time.

Castle and Beckett go to the diner and discover the guy is a lunch regular. Kate says they should wait for him to question him. While they’re waiting, she asks how Alexis liked the tickets and Castle tells her about his fight with Gina and how he was upset because she should’ve asked him first. Kate agrees, but also says that the fact that Gina went through all this trouble shows that she cares.

Their heart to heart is cut short because mystery guy finally shows up. Turns out the guy is a cop and Valerie was doing an undercover job for him at the hospital, investigating medical fraud and a drug smuggling ring. Apparently, Valerie didn’t find anything relevant for weeks, but the night she died, she had called him and said she had found a possible smuggling ring, but needed to check something up north in Katonah before accusing anyone. Back at the precinct they discuss what Valerie could possibly check in Katonah, when Captain Montgomery remembers there is a women’s correctional facility in Bedford Hills, which just happens to be right next to Katonah.

So they investigate who in the medical staff at County Hospital could have a possible link to Bedford Hills and guess what? Popular Nurse Greg McClintock just happens to make weekly visits to his girlfriend Amy Porter, who has been sentenced to 30 years to life for driving the getaway car in a bank robbery gone wrong, where a security guard was killed. However, when they call the facility to bring Amy in for questioning, they are told that she has suffered a stroke that morning and was brought in to County Hospital.

When they get to the hospital, one of the doctors say Amy died while getting an MRI. They ask to see the body and realize that Greg switched the bodies and ran away with Amy. They had forged Amy’s death, using botox, morphine to make her look like she’s dead and another drug to bring her back from her supposed death. The only thing they can do now is put a watch on Greg’s financials and wait for something to pop on his credit card report. Castle suggests that if they had been planning this for so long, then maybe there was something about it in their letters to each other. They get both sets — his and hers — and start digging through it. Soon, they realize that those are just love letters and there’s an awkward moment when Kate reads a passage from Amy’s letter that says ‘I can’t bear to see you suffer. Make a new life with someone else. If anyone deserves it, it’s you’. To which Castle reads Greg’s response that says ‘I don’t believe in much, but I believe in us. And no matter the obstacles, no matter how hard you try, you’ll never get rid of me. I love you’.

Cue very awkward silence after they both realize the parallel to their situation.

They eventually pick Amy and Greg at a burger place called Burgeropolis, where they had first met. Castle had suggested they would go there, but immediately dismissed the idea as stupid. Kate, however, asked for the New Jersey police to check the place anyway.

Greg is brought in for questioning and he insists he had nothing to do with Dr. Monroe’s death. All he wanted was to get Amy out of prison because she was innocent. When Dr. Monroe suspected him, he changed the subject and commented about the nice bracelet she was wearing, to which she went on and on about it. When Castle and Beckett see the bracelet in Valerie’s arm in one of the hospital surveillance cameras, they immediately recognize it. Cesar CalderÃ³n has a necklace with the exact same design.

So they go to the hotel to question CalderÃ³n again, who insists he would never kill her, that he loved her. Kate says they have proof that his car was seen near the funeral home where Valerie’s body was found. He still says he didn’t do it, but then remembers his brother Manoel had the car that night. Turns out that Manoel discovered that Dr. Monroe was doing an undercover job and thought she was setting his brother up. Kate tells him he killed her for nothing because her undercover job was at the hospital and had nothing to do with CalderÃ³n. 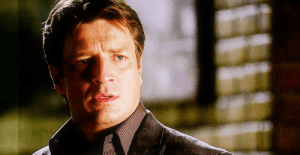 Back at home, Martha is impressed with the story and also congratulates Castle on working things out with Gina. Then she says that he has to evaluate if what he has with Gina is really real. When it came down to it, would he be willing to break her out of jail like Greg did for Amy? Because that’s true love. Castle doesn’t have an answer to that.

At the precinct, Kate and Castle tell Greg and Amy that they’re reopening her case and that she can be hopeful, because her first defense attorney overlooked several pieces of evidence that pointed out she was innocent. And if she gets exonerated, then Greg can escape with probation. When they come back to the bullpen, Castle asks Esposito if he would break him out of jail to which Esposito says he would get out himself first. Castle complains that that’s when you really see who your true friends are, but Kate interrupts them and tell Castle not to worry; if it came down to it, she would get him out.

And then all Beckett/Castle shippers around the world turned to mush.