Home
Castle
Castle 6.10 Review: “The Good, The Bad and The Baby” 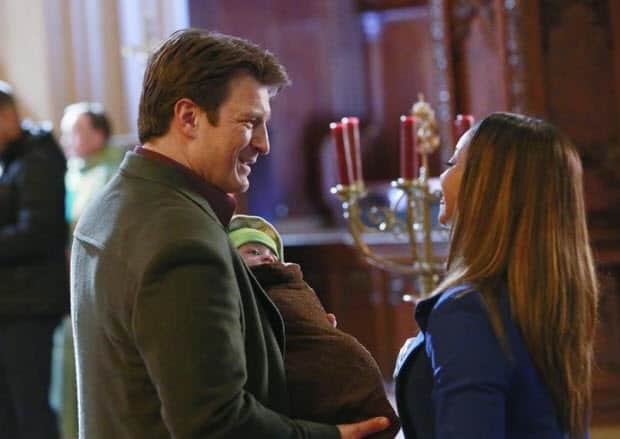 Ooh baby, baby! You know how when you watch a show on a computer screen, it goes black at the end and–if your computer screen is glossy like mine–you can see your reflection? After watching this episode of Castle, my reflection at the end was one big, ear-to-ear grin.

Tonight’s episode was pretty much perfect. We got interaction with the entire cast–including Lanie outside the morgue/crime scene– an interesting case with a fun lottery twist (that I didn’t see coming even though it’s involvement was laced throughout the episode thanks to Ryan), and the best of all: Castle and Beckett taking care of a baby and discussing their future (!!) children together. It was basically the quintessential Castle episode.

The baby was super adorable; I didn’t even see too many “this is clearly a doll” replacement shots either. I loved that every team member got a moment with the baby–even if Esposito’s was “nope.” The way they interacted with the baby was all very in character.Â Cosmo for the baby’s name seems very far from Alexis, but according to episode writer, Terri Edda Miller (our Castle Queen), it’s a reference to Cosmo Brown from “Singin’ in the Rain.” A classic Castle choice; I wonder where Alexis came from and what references he’ll want to make with his children with Beckett.

Children with Beckett! I think we all appreciated their multiple (!!) conversations about having a family together. Words like “when” not “if”, “will” not “could” were thrown around, even though Beckett is still clearly apprehensive about babies. A lot of “tough” female characters have a similar “no babies” edge to them, but I think Beckett is different in that she’s very self aware that she’s not ready yet, but she will be. She wants them, she just hasn’t always been drawn to babies like other people are. I loved the honesty she had about that, and the honesty Castle had about trying to make her a baby person to counteract the effect Meredith had on him. No more cloaking and secrecy in their relationship, and it feels so good! A bonus was the “Always” theme music playing with Beckett eying Future Daddy Castle. What a heart-melting moment!

I love that Beckett tries so hard to become a part of the Castle family. She doesn’t like the tradition, but she did it anyway. And while the joke was on her, she returned it right back–unafraid to develop and add in some new Castle family traditions. A fun, family way to end the winter finale.

This was the last Castle until after the New Year, I’m glad it left me with warm and fuzzies.Â Some of my favorite quotes from the episode are below.Â Happy Holiday’s everyone! Until the next new episode!

“Anything else I need to know about you before we get married?” “So many, many things.”

“When we do this, lets not do the dead body in the middle of the aisle.” — I’m guess that could even be prophetic, considering how this show works.

“I have an RHD in child care.”

“I’m suddenly getting a clear and frightening visual of what my future will look like.”

“I’m sure I’ll feel differently when we have one of our own.”

“What do you say, Beckett? Wanna have a baby?”

“How long have I been gone?”

“When the time comes, there’s no way I’m going to let you take care of our baby on your own.” –and then Ryan-interruptus strikes again!

“Thats evidence. Watch those …..” “Nope. Not gonna touch that one.”