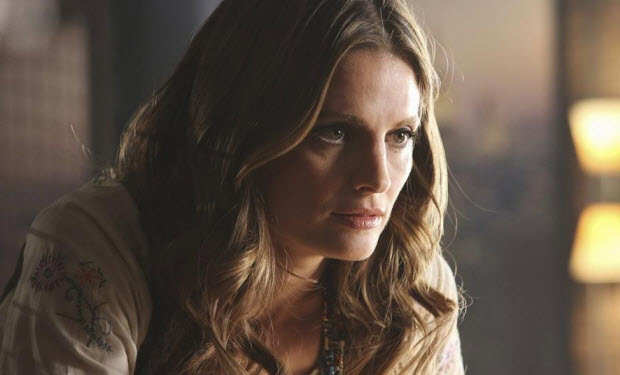 This week we suited up in our best polyester and danced the night away on Castle. A body is found in a construction site and it’s an infamous mobster surfacing after disappearing in 1978. Castle and Beckett must do the time warp back to that year to get the answers they need.

Our victim was Vince Bianchi a mob boss found in a powder blue suit. It was rumored that he was leaving the mob life and maybe someone wanted to take control for themselves. The last person to see him, Frank Russo, took over the family after Vince died. But he claims he must’ve changed suits after they met, because Vince wasn’t in powder blue. Russo’s legit now, though his wife doesn’t appreciate the new lifestyle. Russo points Castle and Beckett to Harold Leone (Jon Polito), Vince’s advisor–if anyone knew where he went after, it would be him.

Just outside Harold’s place, Yvonne, his assistant, is dolled up in classic 70s colored stripes and warns them: he doesn’t know its 2014. Anything that reeks of modernity spooks him and he loses his cool, “Pathological grieving.” Harold is as 70s as they come: he’s waiting All in the Family, his apartment is covered in 70s style wallpaper, and he’s super sexist. “Have you ever seen a cop with an ass that fine?” “Well to be fair, you do have a–” Castle and Beckett try to maintain the illusion, but just as they’re getting into their questions, Beckett slips up. Harold wants to see the body before he tells them anything. But Captain Castle, as Rick lets Harold think he is, pulls rank on Beckett “with the powers vested in me” to get him access to a body. That they don’t have.

Back at the morgue, Lanie shows them Vince’s effects and a nearby rubber body gives Castle an idea–dress the morgue up like the 70s and get Harold to talk there! Kate is skeptical, but Lanie pulls out her Foxxy Brown Halloween costume and Harold eats it up! Or nearly eats her up! “Once you go white, nothing else seems right!” But Harold becomes solemn when he sees the fake!Vince. Just as he’s about to tell them something, an assassin attacks the morgue!

No one’s hurt, but Vince is spoke. “This is what I get for being a snitch.” “You’re technically not a snitch because you haven’t told us anything yet!” Was the assassin hired by Michael Carcano? He’s from a rival family and owns the concrete Vince was found in. He’s in the wind, but Harold wants to go down to the precinct where he feels safe. Kate worries everything is getting out of hand, she’s in charge with Gates out at a seminar. Castle says he’ll take care of everything… by delegating to Martha, who was in need of a project before she took complete control of their wedding planning.

And Martha pulls it off. The 12th becomes awash in shoulder pads, floral decor, and actors with scripts written by Martha! “Let him dig on that 70s vibe!” Ryan and Esposito get a little too into character by transforming themselves into two 70s cop stars: Snookie Watts and Ray Price. A mixture of maybe Starsky and Hutch and Miami Vice. Harold recognizes them and wants them to take his statement. “Can’t believe you let this chick boss you around.” The scene where Ryan and Esposito interview Harold is just comedy gold and so perfectly in character. You can tell Esposito wants to be really into it, but starts to falter just as Ryan, who was initially hesitant, shows that he did his homework. “That’s something more righteous than we’ve ever done.” The rest of the 12th fill in the background with cheesy and poorly acted dialogue, some written by the extras hired by Martha.

Harold tells Ryan and Espo about the Glitterati club they used to go to back in the day, but Espo’s phone rings and Harold loses his thoughts again. Ryan tries to reel him back in, “Lay it on me brother!” but he’s gone. Just as the Snooki/Ray duo head off with Harold to the Glitterati to see if it’ll get Harold back in the groove, Gates shows up and nearly pulls the plug on the whole thing. Kate and Castle get reprimanded (“How could you allow this circus?”), but the investigation continues.

The shooter from the morgue tells Beckett that Frank Russo owned the club then and now, and Castle learns that Harold wore that powder blue suit every time he went there. With Ryan and Espo there with Harold, it’s time to get them out of there. Harold goes after Frank because he thought Frank killed Vince. He’s stopped just in time and brought back to the precinct. Beckett realizes that his “pathological grieving” was partially a ruse to get where he needed to be to find out about Frank. But Frank wasn’t there, Vince booked the club for himself and a girl, one of the Carcano sisters. Harold told Vince to marry someone, anyone, to hide the fact that they were, in fact, in love. Vince was picking a girl to marry but couldn’t go through with it at the last minute, so she shot him. That Carcano sister is now Russo’s wife, Maria.

Now that Vince’s murderer is found, Harold can finally move on, enter the 21st century. The gang, Gates included, all go to the Glitterati in memory of Vince. Esposito joins Tori (the precinct tech girl) and Lanie on the dance floor, Ryan pulls out some spectacular moves, and Castle and Beckett boogie on the dance floor, watching Harold say goodbye to his lover to “Last Dance” by Donna Summer.

This episode of Castle was really fun, and by far the funniest episode this season, if not one of the funniest of the series. There were so many laugh out loud moments, the case was interesting, and there was a nice romantic twist. The idea stretched farther than probable (did Harold really not leave the house at all in 40 years? He didn’t wonder why he’d every episode of All in the Family maybe 40 times?) but the laughter and the way the characters really stepped into their roles made you forget, which is what suspension of disbelief is all about. A wonderful, hilarious episode to go down in the books as a must re-watch.