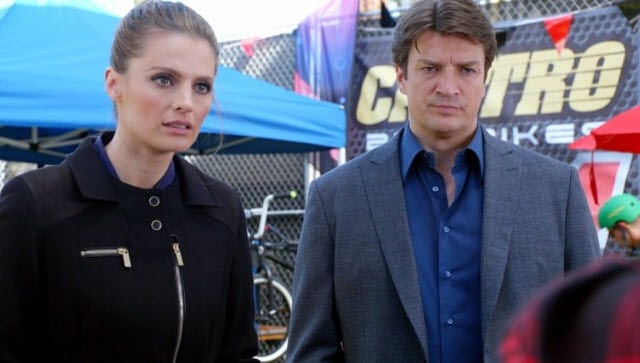 After this season of television, I can never trust a wedding ever again! I hereby declare this the… Orange Wedding? We’re quickly running out of rainbow…

I am still in a state of shock as I write this. This will depart from my usual Castle recap format and just talk about the episode as a whole, theories as to what it might mean for the premiere and season 7, and reasons why I should have foreseen that ending.

So. I really thought it would happen today. They teased the first real kiss and gave it to us along with full-fledged relationship. They gave us the morning after scene. They gave us a successful proposal, a successful long distance relationship, and a successful reunion. And they solved the biggest case of the series only a week ago. So I suppose we should have known they’d wrench our hopes and dreams right from under us (we really should have, I’ll talk about that later). The biggest obstacle to Castle and Beckett getting married wasn’t a now ex-husband–it’s an enemy.

I know that many saw tonight’s episode as clichÃ©. Sure, I think both the plot of the episode and the ending are plots that have been done before, but that doesn’t mean I didn’t enjoy it. The writers clearly had fun with it (Kate as Rogan’s distant wife in a “coma for 15 years), injecting as much humor as they could, so I didn’t mind the well-worn plot twists. I laughed out loud at SO many moments. And clearly they took the hatred many of us had for that dress and ran with it. I had a lot of fun in this episode. It was with sick but amused pleasure that I watched things get worse and worse, because I thought it would all be better at the end. But Castle is right, “Every fairy-tale has them. Terrible trials that only the worthy can transcend,” and while Kate thought their fairy tale danger was in the barn, that’s actually pretty tame for a fairy tale.

With regard to the ending, many times when a “main character is on the chopping block” occurs, fans feel like it’s cheap because we know that character isn’t going to die. They’re contracted for next season! His name is in the show title! But that’s never the point. The worry of death is never the point of that kind of cliffhanger. It’s about how the character will get out of the near-death moment and, more so, what it means for the characters and relationships going forward. I once read a quote that stated that television wasn’t about the big events, but rather reactions to the big events. We aren’t meant to wonder whether Castle will survive, we’re meant to wonder when they will get married, who pushed him off the road, where he is, and how this will affect their future in the season to come. ClichÃ©s on television are sometimes just devices to get you to an original moment.

Now here comes the wait. And the theories. The most obvious theory is that it’s 3XK who took Castle. I think this is the most likely scenario, as he’s been waiting in the wings to make a move and this would be the perfect day to do it. Make Kate think he’s dead, keep Castle alive and taunt him with her sorrow before killing him off. But it could maybe be Castle’s dad, needing him to appear dead because of something he, the father, did. No matter what, it’s going to take the girls to pull Kate into fact-finding, mission mode, and the boys to back her up while they take no names until Castle is found.

I’m hoping we get a two-part premiere. It’s the only way I can see the story being fleshed out and wrapped up, ending with a wedding in part two. Which they basically prepared us for–remember, the initial discussion was for Castle and Beckett to get married in September. They moved it up but inserted that discussion in the first place to prime us to wait all summer to see the wedding. I don’t know if this means time jump to September or we’ll return to this moment in time, but I am excited.

Reasons I should have known they weren’t getting married this episode:

They took a big risk solving the Johanna Beckett case this season (rightfully refusing to drag it out any longer), but had to ensure viewers that there would be mysteries to solve and danger to be had. They needed to renew the tension that they released by solving that series ending mystery–most shows would wait until the final episodes to solve the murder, I certainly thought Castle would be that way. So with that case resolved, presumably once and for all, they couldn’t have two series long story lines end happily in the same season. I certainly believe they won’t make us wait until the potential end of the series to get them married, but resolving them in the same two final episodes is a bit much. They needed a way to push the wedding and the only way to stop Castle from attending that wedding is to physically prevent him from doing so.Â  No half-measures would work. I’m hopeful they’ll get married in the premiere–dragging it out to the season 7 finale or even a midseason break is a bit much when we’ve already seen all this wedding prep–but they definitely couldn’t do it in this finale.

And that’s ok. We now have all summer to dream up possibilities for where Castle is. We can anticipate Kate’s vengeance at whoever has Castle, and hope that their wedding guests can return to the Hamptons house and restage the wedding they’ve already re-worked once. Maybe Castle’s dad isn’t the villain here, but will be the rescuer! Plenty of theories to get us to September. It wasn’t a perfect finale, clichÃ©s often dampen things, but I personally enjoyed it. I was along for the ride; I laughed, I cried, I screamed, and I flailed around my room for a minute wishing I had someone to react with/to after that finale scene. It made me feel what television makes you feel when it’s good: everything.

Things to break your heart

“You are the most adorable meat man a groom could hope for.“

“And here I thought you were one and done kind of girl.”

“Those guys are gonna kill me!” “Over blackmail photos? Those guys are not going to kill you, Rogan.” “Though if you think about it, that would solve our problem.”

“And I want to thank you for making my son so very happy.”

“You’ll be happy to hear, things went smoothly with the judge. You are a free woman. But not for long.”

Well, that was season 6! I’ve had a lot of fun with these recaps/reviews. Thanks for reading along!