Home
Castle
ABC’s Castle: Boo, Hiss! Just When You Thought it was Safe…. 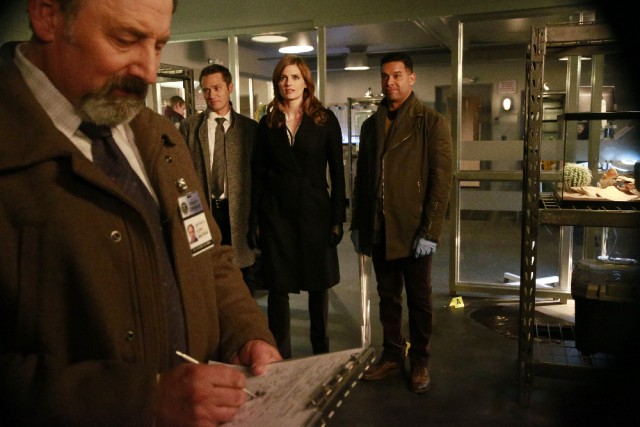 For those viewers hoping for more focus on writer Richard Castle (Nathan Fillion) and NYPD Captain Kate Beckett (Stana Katic) Castle,Â Â “And Justice for All” looks scary – and not in a good way. Â Last week’s episode may have those viewersÂ the idea that the show was going to try to move back towards its original premises of a writer and his muse. Â This Â week the sneak peeks let us know this is absolutely not the case. Â  Does that mean it’s not worth watching? Â That’s depends on why you watch Castle.

It terms of the writing choices it seems that ABC is oblivious to the show’s plummeting ratings in the wake of Â theÂ changes the show continues to push ahead with. Â Meanwhile, EW.com,Â TVFanatic,Â TV Guide, Â TV Insider, andÂ TVLine, have all at some point noted the problems withÂ this latest season.

One of my favorite bits of commentary is from the EW.com recap of Â last fall’s “Cool Boys.” Â  It’s only one sentence, but it says everything that’s wrong with Castle season 8.

The separation thing is getting really old,” Castle tells his mother this week. And that’s a pretty meta statement, even for a show this self-referential.

It was old back in November, and even though the couple have technically gotten back together, the new thin premise of them hiding the relationship creates the same problems mentioned then.

With the dynamic duo still rent apart by a thin plot device, the position of Castle’s partner is up for grabs weekly.

Castle, “And Justice for All” – The Premise, Promos & Sneak Peeks

ABC can’t be completely unaware that the splitting up of Castle and Beckett hasn’t been well received though. Â They’ve started having more shots of Beckett in the promo photos – like it the one featured for this article – and in the promos. Â For instance, theÂ promo for this episodes makes sure to say that “Castle and Beckett” are working the case and to show Beckett, you know, doing stuff.

Well, at least the deadly snakes aren’t on a plane…. Â If you aren’t a fan of snakes this one is going to have a high creepy factor! Â Still, if you were to read the press release you’d figure out that Castle and Beckett working the case doesn’t necessarily mean they’re working the case together.

“And Justice For All” — Beckett and the 12th Precinct look into the murder of an English as a Second Langue student. But when the victim’s class won’t talk to the police, Castle goes undercover as a French Canadian immigrant and learns that the victim was more than he seemed, on “Castle,” MONDAY, FEBRUARY 29 (10:01-11:00 p.m. EST), on the ABC Television Network.

This explains the shots of Beckett with detectives Kevin Ryan (Seamus Dever) and Javier Esposito (Jon Huertas). Â It’s a setup like season seven’s “Child’s Play.” Â In that one Castle went undercover in an elementary school. Â What was that episode like?

Basically, Beckett, Ryan and Esposito are running around putting the case together while Castle does his thing in the classroom.Â Â There’s a dead retired cop, a mail box that he shared with the victim that never got any mail — it’s boring. Â I hate to be so blunt, but what makes the cases really pop is watching Castle and Beckett solve them. Without that there’s really no snap-crackle-pop of excitement. Â (www.gossipandgab.com)

At least the most recent sneak peek (the third one) shows Castle and Beckett in an actual scene together. Unfortunately, it doesn’t really suggest to viewers that there will be more of them together in the episode.

Seriously? Now Beckett is telling Castle to go see his daughter Alexis (Molly Quinn) and the out of nowhere new addition to the cast Â “security specialist” Haley Shipton (Toks Olagundoye) at the P.I. office for “inspiration”?Are Alexis and Hayley are supposed to be his muse? There’s all kinds of grossness with that I’m not going to get into, but that’s just, eww! At least they remembered he’s actually a writer though.

Of course, the writers are careful not to say he’s going to get a new muse because this is part of trying to change the show’s premise. Â  On CastleÂ the case isn’t supposed the inspiration, Beckett working on the cases is the inspiration!

Incidentally, shouldn’t Castle and Beckett be worried that sooner or later LokSat will notice that Beckett goes into that other building and seems to just stay for hours and hours? Â Beckett totally looks like she’s living with him again – but, no, they’re still saying that the charade is happening. This premise gets thinner by the episode.

Anyway, that was third sneak peek. Â Perhaps it was released to justify this second one?

See, the third sneak peek not only shows that Beckett is actually in the episode, but it has her telling Castle to find inspiration with Alexis & Hayley.

Also what did you think about the dig Alexis makes at “1940’s gumshoe novels”? For years that 1940’s feel been an underlying theme with Castle, one most particularly celebrated in season four’s “The Blue Butterfly” Â Then there’s the whole Nick and Nora/Thin Man comparisons that have been made over the years – even for the first season. Â So, my first reaction to her comment was, “what’s wrong with 1940’s gumshoe novels?”

Another issue that has plagued Castle season 8, but was largely absent last week, is an onslaught of frat boy humor and long “comedic’ scenes. This Fillion quote from TVLine could explains the reasons why we’re getting so much of this.

One of the things that Terence and Alexi are really big on, and I agree, is they don’t consider Castle to be a drama,” Fillion said. “It’s never been much of a drama; it’s far more a comedy with dramatic and heartfelt moments. And they wanted to bring it back to a time when it was funny, when it was great, when it was the lighthearted show that everybody fell in love with.

The problem is that Castle never was a comedy. It was a dramedy – and that’s what people fell in love with. Nor is the the kind of comedy that Castle used to do the kind we’re seeing in this sneak peek.

I suspect this long sequence is meant to funny. Â Maybe if you’re a 13-year-old boy making fun of ethnic names and doing strange CGI characters and making garbled voices is funny. Â However, this humor is far removed from the fun and witty scenes that used to be on Castle. Remember this classic bit from season 1?

If the writers really want to bring the show back to “when it was great” they need to go ahead and really watch the those episodes because thus far the tone has been really off. Â However, this Â style of humor does fit into what we’ve seen ofÂ Castle 2.0. Â  Therefore, if you’ve been enjoying the new version of Castle this episode will be…fun.