Castle returns with all new episodes on January 3. Laura Prepon will be making a special guest appearance as the actress playing Nikki Heat. She will be researching her role with Castle and Beckett. We previously posted three sneak peeks for the upcoming episode and now we have promo photos from ABC. 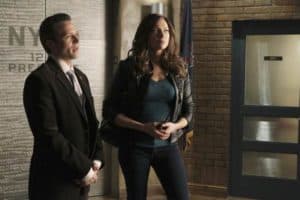 “Nikki Heat” – Castle’s novel “Heat Wave” is being turned into a movie, and the Hollywood hottie cast as the movie’s lead shows up at Beckett’s invitation to better understand the character she’s going to play. Laura Prepon (“October Road,” “That ’70s Show”) guest stars as actress Natalie Rhodes. As our threesome investigates the murder of a high-class matchmaker, Natalie goes to extremes in the name of “character research,” transforming herself into the spitting image of Beckett — much to Castle’s delight and Beckett’s dismay. Also in the episode, Melody Thomas Scott (“Young & the Restless”) and Thomas Calabro (“Melrose Place”) guest star, on “Castle,” MONDAY, JANUARY 3 (10:01-11:00 p.m. ET).