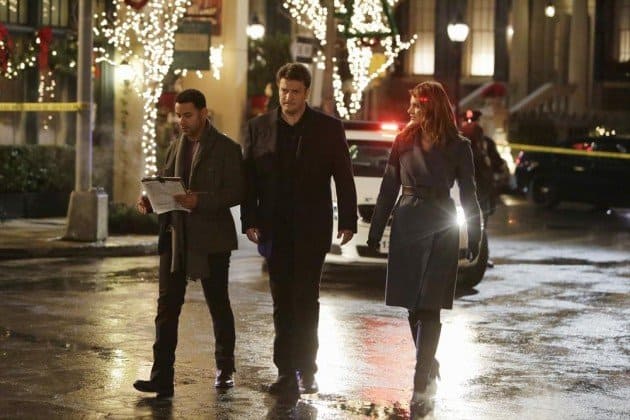 In this week’s Castle, the midseason finale takes an unexpected turn.

This season of Castle has been all about themed title cards (candy canes this week!) and game changing storylines. Every time you think they will remain stagnant, they throw a new curve at you. Castle’s memory loss and mysterious disappearance, the actual wedding happening for real, and now this new development: Castle is fired from the NYPD! More on this later.

An ER doctor is found shot to death just before the holidays, presumably by a rogue Santa Claus. “Santa finally cracked.” “Or our victim was naughty instead of nice.” The victim, Eric Mercer, was a mob doctor who patched up members of the Carlucci family in his spare time. The patriarch of the family, Dino Scarpella, knows Castle (because Castle knows at least three current or former mobsters) so he and Beckett head over to talk to him. Dino seems willing to help, but the main suspect is Dino’s right hand man: Christopher. He’s got the bloody Santa suit stowed away in his car. Dino insists to Castle that Christopher didn’t do it, coercing Rick into following up on the investigation through his Godfather-esque aura and a blood oath.

“You’re blood now, Rick. You’re family. Do not let me down.”

Castle agrees, but only to legal justice.

Kate thinks Dino is playing Castle. They’ve already got Christopher in custody and Dino is clearly trying to get his right hand man out of trouble.

“You believe Dino because he gave you a paper-cut?” Caste appeals to Kate’s underlying love of the story. “Don’t you want to know who the real killer is?” Kate agrees, but only if they keep it from Gates.

Castle chats with Christopher, now that he’s in with the mob, and Christopher tells him that anyone who’d want to hurt him would kill him, not frame him. He sends Castle to Cyber Rita, who provided Eric with 12 credit cards so that he could purchase a car. Was Eric on the run from someone?

Espo comes back with a clue: Eric was at a salt depot earlier that day. Castle and Beckett head over and find a stashed backpack filled with bloody clothing pierced with bullet holes. The victim of this particular crime wasn’t Eric, but perhaps someone he patched up as the mob doctor. No one’s come in to the morgue with such lethal wounds and Castle learns that no one in the Calucci family was hit either. So Eric must have been helping someone from another family.

That other person is Luca Tessaro, from the rival family. Luca seemed to have hit on Dino’s daughter, Jane, so Luca was especially on the outs with the Calucci’s. But of course, in typical mobster/Shakspearean fashion, Luca and Jane were in love. When Luca got shot, Jane called Eric to patch him up, but he died. Could the Tessaros have come after Eric in revenge? If they did, Dino wants a war with the two families!

Jane alibis out, but someone recently ordered pizza with one of the stolen credit cards. Castle and Beckett head to the pizzaÂ drop zone and discover that Luca is alive! He’s been hiding out with Jane, getting ready to run away together. The person who shot at Luca must have killed Eric. A new player in town who goes by the name Ilpa Numbra.

Castle hits up Cyber Rita (who has a thing with Christopher the number two guy) to track a bank account with the funds Ilpa Numbra’s been getting from his shady tactics. A video reveals that Ilpa Numbra is Detective McBride, who’s been pointing Castle and Beckett towards Dino and Christopher all this time.

Dino comes to collect Christopher at the precinct and tells Castle he will bless Luca and Jane’s relationship and there won’t be a war between the families. “‘tis the season of peace, no?” Dino feels like he owes Castle for this. “It’s a call I hope I never have to make.” This keeps the door open for Dino’s return — will he help with Castle’s mental mystery?

At the office Christmas party in the bullpen, Kate shows Castle a poem she’s been working on for the Castle Family Christmas Card — which has to rhyme in six lines. Her poem is appropriately schmaltzy (and she knows it):

“This has been an epic year

Life’s been full of joy and tears

But Castle can’t enjoy the moment or the party, because Gates has just informed him that due to his cooperation with the mob, and the subsequent death of Detective McBride on his way to central booking, that he is no longer permitted to work with the NYPD!

Hopefully this development is about as long-lived as Kate quitting at the end of season 4 and if not, it has a longer lasting effect than Kate’s jaunt with the feds at the beginning of season 6. I appreciate the writers for throwing a new curve in, especially since, though they won’t be working together, they still live together. There’s plenty of conflict and story that could come from Castle not working with the NYPD but still wanting to butt in and help. Post-episode trailers show that Castle will be registering as a Private Investigator — which actually makes me wonder why he wasn’t one before. He totally could have been and it’s definitely something he’d do. If that’s the case, then I could see this lasting quite a few episodes. Castle and Beckett working different cases and the struggle of never seeing each other or needing the other’s opinion but being unable to share. Them working the same case and approaching it from different directions. Competition on who will solve the case faster. And just the general missing each other as they try to solve crimes without the others’ skillset and potentially not seeing each other at all while they work opposing case hours.

It will definitely be an interesting run of episodes for however long Castle is banned from the force. Seems like he’ll have to do something major to get back in,which we know will probably happen since the precinct and the Castle/Beckett partnership is the bread and butter of the show. But I appreciate the writers injecting new life into a season that has already resolved so many longstanding things. It’s hard for a procedural do that without killing off their existing cast and hiring new blood. Without a constant revolving door of new cast members, it’s important for the show to find other ways to change things up. I’m excited to see what they do with this twist.

Our side story involved Lanie and Esposito trying to make Lanie’s parents believe they’re engaged. They’re slow on the engagement story, so Ryan fills them in with the story of a Central Park boat ride proposal (Ryan really is the Castle of the Rysposito duo). In the end, however, Lanie and Esposito decide to call it quits. It’s hard to tell, especially after last week when Esposito seemed to want to get serious with Lanie, if he was going to say something else and her less than warm response led him to cool it off or if he really felt like they should end things. Wil they come back together or will we see Espo with the beat cop from last week, or maybe even Tory the tech?

I’m a little surprised that Kate didn’t get into trouble for hiding Castle’s involvement with the mob, but there wasn’t much time at the end and I guess Gates thinks Beckett losing her partner is punishment enough for the both of them — she does have to go home and deal with his potential whining or depression. It’s also interesting that Gates says, “I’m sorry.” I wonder if we’ll see any reaction from her with Castle’s absence.Â She shows a cold shoulder for Castle most of the time, but often lets him see her soft spot for him that keeps growing and growing. Might be interesting to see if Gates misses having Castle around or if his PI antics will just annoy her.