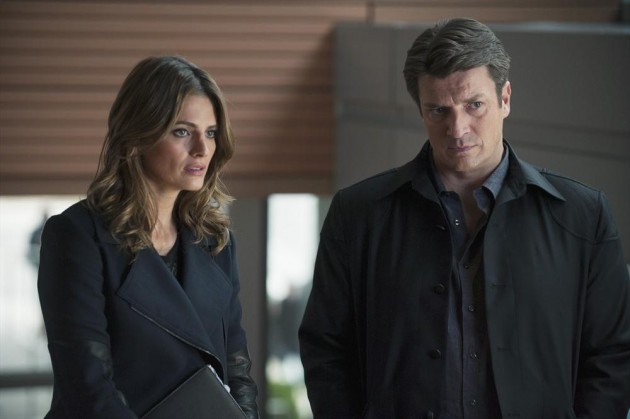 In the CastleÂ mid season finale, Castle was banned from working with the NYPD, because his meddling, while it solved the case, got him into some trouble that even his mayoral connections couldn’t get him out of. Since then, he’s been wallowing at him in his pajamas, but today, to Kate and Martha’s surprise, he’s up, dressed, and has a surprise for Kate. She gets the work call before they can discuss any further, but she’s appropriately wary.

At the crime scene, our victim, Shayna, was killed by an intruder who was waiting for her when she got home. HerÂ dog is missing and the killer foolishly left a cigarette butt while he lay in wait. Perlmutter is back as our grumpy ME and he’s still not over Kate having married Castle. He has very little time to be thankful Castle’sÂ not there, because soon enough Castle pops in with his shiny new (just finished yesterday) private investigator’s license! He’s been working on it secretly for weeks, while Kate thought he was playing video games (she didn’t even give him credit for writing his next novel). Kate tells him that he still can’t work with them and he pouts his way out of the crime scene, but not before telling them he’ll just work parallel to their case.

Beckett and EspoÂ head to the school where Shayna worked, but as they step up to the doors, Castle greets them with coffee and a smug smile. Kate wants to know how he got there first – he just did a little digging, “it’s confidential.” The school, he tells her, is a prestigious school for elementary kids with important parents, like up-and-coming state prosecutor Spaulding Elliot. They both enter and speak with the principal, but Castle begins to take over the interview in ways he hasn’t done before. They find out she’d recently sent out rejection letters to incoming students and a parent called and made very personal threats against her life. Kate goes back to the precinct, leaving Castle sadly fiddling in Shayna’s office, unable to go with her. But he perks up when she finds another lead: the missing dog!

Kate tells Gates about Castle’s PI status, which ticks her off. They can’t really do anything about it — except refuse to help him! Kate and the boys see it as a bit of a competition — they’re a bit threatened by Castle’s progress so far. They need to finish the case before he does, really just to feel better about themselves.

Meanwhile, our private eye is stalking a man with a dog — Shayna’s dog Sparkles to be specific. The dog watcher pepper sprays Castle, who really needs to learn how to approach people, but Castle learns that Shayna passed off the dog to her friend last minute, something she doesn’t usually do. Castle then drops in on Perlmutter, not a smart move for an independent detective to piss off the ME, but he manages to learn that Shayna had recently been on a plane. Beckett quickly catches up, learning the trip was to Boston and that ShaynaÂ met with a lawyer friend a few hours before she left. Beckett goes to meet the lawyer at her next appointment — which happens to be at Richard Castle Investigations.

Castle bought himself an office — a very film noir office with a vintage gated elevator. Beckett is upset he bought an office and got his license all without telling her, “married people tell each other things!” He placates her and allows her to sit in with him on his interview.Â Castle takes the lead, offering Beckett a nice stool to sit on. Nicole, the lawyer, says that Shayna was looking into legal issues involving death and manslaughter charges. Upon Nicole’s exit, Castle and Beckett have their standard case solving foreplay, but before it goes too far, Beckett pumps the brakes.

“I’m sorry, Castle. We shouldn’t be doing this.” “Doing what?” “This. You, me. Theorizing. Together. It’s not right. especially here, after this whole PI thing.” “Don’t think about it! Just think about how it feels when we work together. Besides, we have the place to ourselves, who’s gonna know?”

Kate nearly gives in to Castle’s theorizing spell, but is caseblocked by Espo who calls with new details. Beckett runs out on Castle without giving him the goods — and by goods, of course I mean the deets.

“You said married people tell each other things!”

The new clue is the man who threatened Shayna after his kid didn’t get into the school. Turns out, she offered him a trade to get his kid in after the fact. In return, she wanted access to the Dean of students at a university in Boston. When Ryan posits that Castle might have figured out why Shayna would do that before they have, Kate and the boys call him up, trying to pump information out of him. But Castle, who’s been having dinner with Alexis, returns the favor — trying to get BeckettÂ to spill on their case updates. They end with a stalemate, but Kate runs home ahead of Castle with wine to try to finish the deed. They’re each stuck without the others’ help, so they decide to just fair trade. “For the victim.” When they do, it’s explosive: No longer caseblocked, they theorize until the dawn (amongst other things), but a well timed 2am text to Ryan — and the new lead it provides — leaves Castle in bed while Kate runs out to follow the trail.

“I thought we had something special!”

Turns out, Shayna was looking into her old college boyfriend’s death — he fell out of a window at a party and there was one person in the room with him. The onlyÂ person who knows who was in that room was the editor in chief to the college paper, someone whoÂ now works for the Ledger. Castle runs and meets with Frank Jackson, who seems like he’s going to kill Castle in a dark seedy alley, but he actually agrees to tell his story to the cops. Castle brings him to Kate and Frank admits that he told Shayna who killed her boyfriend and it seemed to get her killed. It was federal prosecutor Elliot Spaulding. Spaulding’s father threatened Frank into silence and it’s haunted him all these years. Gates knows they need concrete proof against Elliot that he won’t willingly provide. Kate thinks the lone cigarette butt can tie him to the murder. Castle agrees to stay away from the case, but instead, he plots on how to get a DNA sample from Spaulding. Just when it looks like he’s ahead, Rysposito arrive and steal his thunder.

“Sorry Sherlock, not this time.”

The evidence ties Spaulding to the scene, but he continues to deny his involvement — okay, yeah he was in the room with Shayna’s boyfriend, but it really was an accident! — leaving Gates and Beckett to push harder and harder on him. Until Castle BURSTS into the interrogation room and proclaims Spaulding’s innocence. Gates is furious (and Kate is a little nervous for her husband — Gates maybe be tiny, but she’s fierce!). Castle says he can prove Spaulding’s innocence and it all has to do with Sparkles. Castle brings the dogÂ into the interrogation room, where Spaulding starts sneezing and hiving like nobody’s business. He’s severlyÂ allergic to dogs and therefore couldn’t have been at the crime scene, certainly not quietly. So who’s framing Spaulding for Shayna’s murder and the college coverup?

Kate visits Castle at his PIs office while he’s was PI monologuing (well, he’d recorded it ahead of time, complete with saxophone-y background music). She’s discovered who framed Spaulding and killed Shayna, but because of how much he helped them, she’s letting him get the collar. Nicole, Shayna’s lawyer friend, enters Castle’s office. She never tells who she was working for, but they’ve got all they need for an arrest.
Back at home, Beckett is proud of Castle, and Castle even impressed himself too. Kate’s got Castle a gift to show her support of his PI career: a Sherlock Holmes deerstalker and a giant magnifying glass. They run off to play with Castle’s new toys — in the bedroom.

This episode was such a fun return from the midseason finale and a fresh new direction for the show. I worry it can’t last tooÂ long — how many episodes can we have of them running parallel or opposing cases? But I doubt it isÂ meant to. It’s something fun and new for the show to try and I can’t wait for the conflict it provides between Castle and Beckett in the future — it can’t all be friendly competition and case put together foreplay. The episode left me with a smile on my face — partially because I really like saxophones and all the noir background music included a lot of it. I can’t wait to see what else Castle, Private Investigator, has in store for us.

– Perlmutter’s return was great in an episode that had to deal with Castle not being allowed at a crime scene.

– I liked that the competition between who could solve the case faster was more on behalf of Kate and the boys than a direct challenge from Castle himself. He’s not trying to be cocky about it — though he could be, he’s been working with the NYPD for the past 7 years and had the skills to solve crimes even before that with all his book research — but he’s acknowledging that he’s falling into success a little bit. This will lead to some great stories where he fails because you can’t be lucky every time. I also like that they have already begun to acknowledge that Castle and Beckett need the other’s special skills/resources to solve the crime. As their cases become separate (or are come at from differing angles), it will be interesting to see how they solve crimes when they can’t work together (because they’re busy with their own cases or Castle is working for Beckett’s prime suspect or something like that).

– Have they been calling their theorizing foreplay “put togethers” all this time?

– “Her mother’s maiden name and a service falsetto.”

– The man who plays Frank Jackson was on Sabrina the Teenage Witch a season before Jon Huertas was.

– Baby Castle, aka Ryan, filling for Castle’s conspiracy theories was true to form and as Castle gets to hang out with them less and less, I see Ryan’s theories becoming more and more outrageous — except he doesn’t quite have Castle’s flair. Perhaps he will perfect it soon. “Ryan, you played the C card?” [Conspiracy] “Well, with you not around, someone had to step up.”

– “What happened to that rebellious girl with the motorcycle and the leather jacket? Would she say can’t?” “She enforces the law now and drinks expensive wine.”