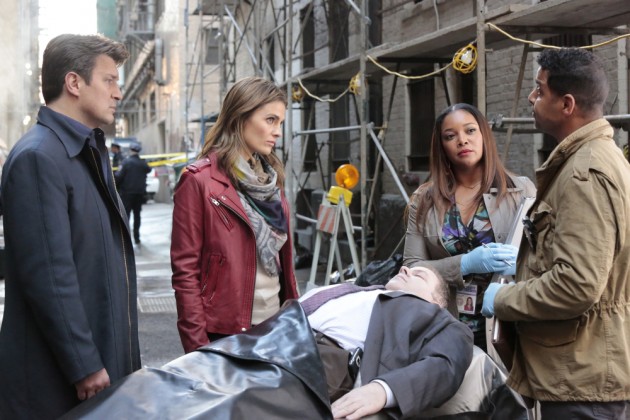 It’s fitting thatÂ this week’s Castle aired after Dancing With the Stars, since there was a lot of competition talk between our favorite detectives. In our main story there was competition as well, between personal injury lawyers, one that might have gotten Richie “The Pitbull” Falcon killed.

Before Castle is ready to dive into the case, he first must know: what routine are Ryan and Esposito doing at the Policemen’s Benevolent Fundraiser talent competition? Rysposito are two-year champs, last year performing “Crime of Our Lives” (featuring the lift from Dirty Dancing. They tease us with things they won’t ever show us… ). On to the victim: The Pitbull was hit blunt force in the middle of the night. Castle and Beckett head to Richie’s office, where his assistant says he’s been paranoid for days–he didn’t even come in to work the day before. Apparently, he was in the country somewhere surrounded by the “cold’s foot” flower. He’d also been tased recently. Who would tase a personal injury lawyer?

No one on his client list makes sense, so they have to look elsewhere. But before they can, Gates sidles up to Castle. Kimmel (as in ABC’s Jimmy?) was supposed to perform at the fundraiser, but had to back out. Since Castle is their resident “celebrity” (I’m sure he’d resent the quotation marks), Gates needs him as back up. But Castle ropes Beckett in so they can get Ryspo’s trophy. Beckett is not too thrilled.

“Relax. We’ll just do our routine.” “We don’t have a routine.” “Come on, that thing in the shower? That is delightful.” “That’s two naked people singing when there’s no one around to see or hear it.”

Ryan interrupts their misunderstanding with video footage. Pitbull was shoved into the car of Derek Bolt, a former NFL player, right before Richie died. Bolt… bolts (no other way to say it), leaving Espo to chase him down. But he denies harming Richie in anyway. He says he needed his help with some “baby mama” drama. Espo comes limping in later, claiming his knee was tweaked chasing Bolt down. Because Castle can’t help but take advantage of Espo’s weakness, and they place bets on who will win the talent competition. Espo’s limp came with new details: Richie called his ex-wife Elise Resner.

Elise says Richie needed her help; she didn’t ask, he didn’t say why. Later that day, Richie was spotted arguing with a competing personal injury lawyer: Archie Bronstein, The Savannah Hammer (where do these people get these names?!). Archie spotted Richie trying to steal one of his clients, a woman who got into a car crash with a truck and got splinters in her heart. (Sounds like she could be the next Iron Man…Marvel is owned by Disney, who owns ABC.)

Hammer alibis out (“he was nailing one of his clients”), but back at Richie’s place, they spot a bag with suspicious items in it, including a list of places and dates, night vision goggles, wire cutters and chloroform. The night vision goggles belong to a man named Mike Samson, a private investigator who lent them to Richie, even after Richie asked how to get rid of a body… Back at the precinct, Castle and Beckett look for Ryan and Esposito to run down more case details, but they’re in the interrogation room. Alone. Castle and Beckett fly into the observation room and spot them DANCING. They’re doing their routine to”Get Lucky” by Daft Punk–Why didn’t they ask the guard outside to also guard the observation room!?

Tory comes in and spots the location Richie was in where he brushed against the “cold’s foot.” Castle and Beckett go up there–alone, since Ryspo must have still been practicing–to see if Richie buried any dead bodies there. Turns out, it was just a crash test dummy, but before they can look further, they are accosted at gunpoint, zip-tied, and the mystery man runs off with their phones and the dummy. (I hope the NYPD gets them new phones with how often they are lost, stolen, or destroyed on duty.)

At home, Martha watches Castle and Beckett rehearse. Martha thinks it’s great (with a few Martha Rodgers: Broadway Star tweaks, of course), but Kate is convinced she’ll sound horrible. She’s got terrible Â song fright. Though Castle didn’t seem like he was listening, suddenly, Jimmy Kimmel’s schedule lightened up (I think he had to do that interview from Lena Dunham’s episode of Scandal first), and he’s able to commit to the fundraiser, leaving Castle and Beckett out.

The guy who followed Castle and Beckett into the woods was P.I. Mike Samson. They dump the dummy on Lanie, who points out that there are holes around the chest area… resembling the shrapnel marks in Iron Girl from earlier. The girl says that The Pitbull kept dogging her (couldn’t resist) about the accident. Castle asks about the car, as did someone who showed up yesterday… Mike’s ex-wife. The car was a Modesto Sedan and they’ve been having trouble over the last few years with similar incidents of drivers getting hurt via airbag malfunctions. The firm that represented them was the same company that Richie worked for. As did his ex-wife, who now works for Modesto themselves. Richie was trying to absolve his guilt by outing the company, and when he told his Elise, she didn’t have the same desire.

Elise is brought into interrogation, but she hedges and stonewalls them. Beckett accuses her of hiring Samson to kill Richie and steal the dummy back, but she claims he was talking to Archie, The Savannah Hammer, the night Richie died. Samson admits to stealing the dummy from Castle and Beckett but points them right at Hammer, who paid him to do it. The taser and the tire iron that killed Richie were still in his car (amateur…), plus his supposed alibi gave him up too. The Hammer claims he did it because Richie just wanted justice; Archie was going to get millions off the crash test dummy. “It’s smaller time.”

Ryan and Esposito win the competition and Castle admits to pulling out of the competition because he knew Kate had stage fright. They end the night doing their routine in the shower. “The only audience I care about it you.” Precious.

I wasn’t too excited about this episode going in, but I was pleasantly surprised by how engaged I was in the case and the silly B-story. It included a lot of great Castle family moments, silly banter between Castle and the boys, and a sweet ending. But next week things seem to take a darker turn with the return (FINALLY) of the Castle Disappearance arc. DUN DUN DUNN! Until then!

– I loved Castle and Beckett’s playful courtroom banner in the beginning, as well as how Kate was helping Alexis with her midterm.

– Those two really don’t interact a lot, and Alexis doesn’t always seem interested in bonding, so it’s nice whenever it’s just the two of them.

– Ryan and Espo’s dance!!!!! Not much I can say about it… Except I love love LOVE the way they ended it with their badges. Those goobers!

– I wonder if snapping your arms against your butt really works in breaking zipties… no intention on finding out any time soon.