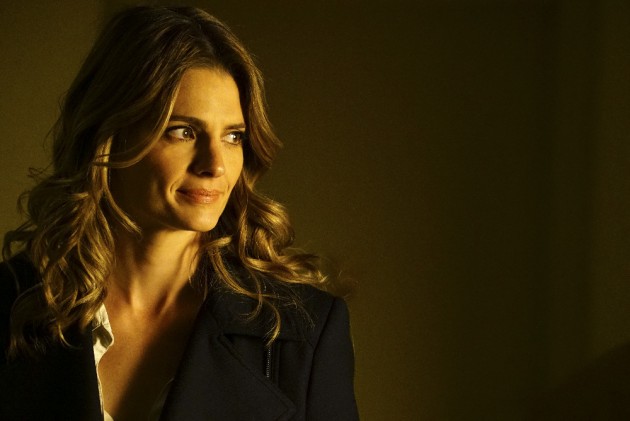 This week’s episode of Castle finally wraps up the Castle disappearance arc, which has been in play since he missed his wedding ceremony in the season six finale. Going into the episode, I felt trepidation; the conclusion to this story must be compelling to be drawn out an entire season but only a handful of episodes. Even the characters seemed determine to put it behind them, decreasing my interest in the mystery. All-in-all, this season has been one of tying up loose ends (due to the show’s fate for season eight still up in the air), so it’s hard to think the show will need another season after this one; with this story, the Caskett romance settled, and Beckett’s mother’s killer caught, there’s not much left to explore. If the show does go on for one more season, I forsee it being its last. But let’s jump into this week’s episode.

As I said, the explanation behind Castle’s disappearance had a lot riding on it and I’m not sure I bought the execution. Castle’s been dreaming about his time away. There’s the boat he was found on, bullets, blood, a bleeding man, an award trophy… Castle doesn’t really want to talk about it, but Kate is worried about Castle’s mental well-being. “Everything is perfect right now Why go turning over stones?” Kate offers Dr. Burke’s help (from Season Four!), who tries to help Castle understand these dreams.
“By my nature, I try to avoid introspection.”

Burke helps Castle dig deeper into his dream, which consists of a jungle car chase and a man who looks a lot like Chuck Norris. Burke cautions, “Don’t assume the images are acutal memories,” but Castle feels they’re real. The clues in the dream lead to Thailand, which causes Castle to spiral into maps and murderboards. Kate thinks it’s better to focus on the trophy, rather than the entire country of Thailand. Castle realize it’s a school trophy that he still has from a debate competition. He shared the trophy with Phillip Bartlett, but when Castle meets Bartlett, the old classmate was in Thailand but knows nothing about armed car chases. He’s more concerned about the not quite a woman he might have had relations with in Bangkok. Castle’s other dream clues become dead ends as well when a license plate he saw turns out to be a common “555-1234” type plate used in lots of action movies.

Just when the team is ready to give up on Castle, a list of Special Forces operatives that Esposito presents Castle rings a bell: Jeff Powers would look an awful lot like Chuck Norris with a beard. They head to Powers’ place and there he is–dead. He’d been shot point blank in the skull, with his teeth removed.

“Castle starts remembering this guy and all of sudden he becomes a homicide victim?”

While the boys track down an dancer named Amber who met with Powers on a regular basis, Castle sees Burke again. He’s not getting any new clues from the dream, but Burke suggests considering what triggered the dreams in the first place. Castle remembers going to a coffee shop a week ago (“I was writing. Or rather, procrastinating.”), when a news item caused him to hear ringing in his ears, a headache forming. When they figure out which clip was playing, they spot a blonde man that Castle recognizes from his dream.

“Whoever he is, he’s at the center of this.”

Kate is now concerned with Castle’s physical wellbeing. “LT is going to drive you home.” “And if I refuse?” “He’ll drive you home in handcuffs.” “Just for the record? Extremely bitter.” The team works on finding any clues to the Russian at Powers’ apartment and Castle goes home where Alexis comes to keep him company. “Which [theory] scares you the most?” Castle is worried he did something terrible and while Alexis doesn’t believe that he could, Castle believes he’d never willingly abandon her and Kate. Beckett and the boys find the identity of the Russian from Castle’s dream: Ilya Golovkin.

Here’s where the episode starts to feel convoluted. Kate, Ryan, and Esposito head back to Powers’ place where they find Amber, the dancer from earlier, killed the same way Powers was. Golovkin knows they’re investigating him. Meanwhile, Castle goes to Sunil Cafe–under the guise of looking for a Henry Jenkins connection–where Powers visited on a weekly basis. When he gets there, he sees the man in his dream: the one who was bleeding. The man bolts, leading Castle to chase him through the kitchens. “You should never have come. If you’re here it means I’m a dead man.” It felt like Castle’s interest in looking for Jenkins was just to remind the audience he existed. His involvement is barely explained later and wasn’t anything Castle could have figured out through Powers’ financial records.

Before cutting to the end, however, the man Castle meets identifies himself as Bilal as he quickly packs his things and gets ready to leave. “They promsed me you wouldn’t remember.” He was indeed with Castle in Thailand, who was there at his request. Bilal was a student at Castle’s school, he’s the one who was in debate with Castle. They replaced memories of him with Phillip Barltett. “I can’t believe they picked Bartlett. That douchebag!” Bilal was once a CIA agent (he consulted with Castle on one of this Derek Storm novels) who defected to al-Qaeda. When he was ready to return, he had information to give back to the government, but his handler died. He didn’t trust anybody so he asked for Castle as a safety net, a public face who couldn’t be easily killed without suspicion. He was kidnapped before the wedding because Bilal had time sensitive information that would prevent an attack on American soil. Castle’s presence saved the day.

“I have the deepest gratitude for everything you have done.” “I just wish I could remember what it was.”

This all felt like too much to be being revealed in the last 20 minutes of the episode. There were too many players, added at the last minute that made Jenkins from the previous episode feel irrelevant. When Bilal leaves Castle in an alley, Golovkin makes a move on Castle, but suddenly Jenkins arrives out of nowhere and kills Golovkin. It felt like they moved the story away from Jenkins, but then they tried to squeeze him in at the last minute. Castle pops Jenkins in the nose for making him miss the wedding. “Yeah you missed your wedding. But you also saved tens of thousands of lives.”

What’s been bugging me about Castle’s memory loss is that the show usually finds a way to make a lot of supernatural or weird science stuff plausible–given more of an explanation–but they didn’t even bother to explain how Castle’s memories were altered to delete two specific months and replace very specific childhood memories with new ones. If Castle helped save the world, what would make him want to forget? He’s done enough with the police to know how to keep his mouth shut about top secret matters. So far the explanation doesn’t quite make much sense.

I suppose we still need more answers. As Castle says, he still doesn’t know why he was gone for two months or how he got his bullet wound. For now, he and Kate seem content with the answers they received, even if I am not.