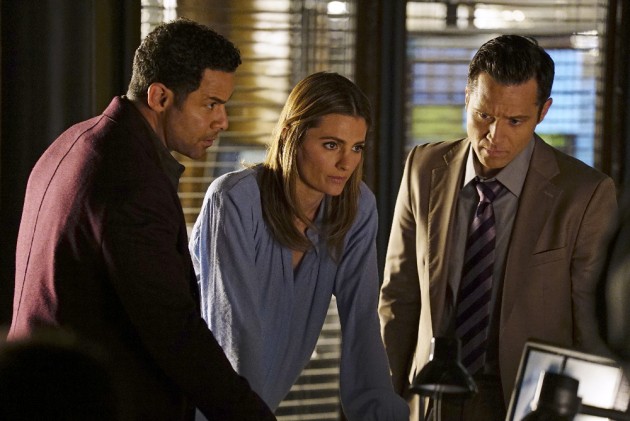 As if we didn’t already know, Castle has the Angela Lansbury curse, where murder follows him everywhere he goes. On this week’s episode of Castle, he cashed in his frequent murder miles and solved a case in the sky.

Castle and Alexis are on a trip to London (on a known to be deadly Oceanic Air… no wonder they come across trouble), where Castle will be speaking at the Sherlock Holmes Society. He’s a bit upset that Alexis won’t come with him, but soon they have other concerns as the air marshal is found dead in the cargo hold. The pilot thinks Castle’s assistance is necessary: “You’re the closest thing to law enforcement we have on this plane.” “Which itself is cause for concern.”

With Beckett and the boys helping where they can on the ground, Castle begins the investigation. Alexis wants to help (remember those two episodes where she interned with Lanie?), but Castle is having trouble remembering she’s not a little girl anymore. Alexis checks for clues, calling Lanie and facetiming an autopsy, while Castle runs down Air Marshall Kyle Ford’s last moments on the plane. Just before he died, he was clocking a terrorism suspect at the back of the plane. Castle uses the selfies of two honeymooning guys to locate who Ford was tracking. The man is sitting in the seat of ‘Isadore Baldin,’ but when Kate checks in, she says that Baldin is in New York with a stolen passport claim. When they detain the false Baldin, they learn that he’s a student whose “cousin” signed him up for Isis, and he’s just going to visit his sick mother. He insists that Ford was on to him, but then got a bunch of texts and ran to the back of the plane. Castle and the flight crew (including the friendly and helpful Debbie and Farah) didn’t notice a second phone; however, Tory pings it from the ground, and they find it full of anonymous texts. Texts that lead to Ford’s death in the cargo hold.

In order to find the texter, the Castles and the flight crew hand out forms that will identify the left handed (through the way Ford was bashed across the head) killer. Next suspect? Marilyn Singer, who once worked for Oceanic and was fired recently. When they check her bag, they find Ford’s gun and the cell phone with the replies to Ford’s texts. Singer claims it wasn’t her; she and Ford were dating, and she was suspicious of why he took this flight last minute. She thought he might be having an affair and is shocked to learn he is dead. (Wasn’t she confused as to why he’d gone missing on the flight? She wasn’t checking his seat every five minutes to see what he was doing? Terrible stalker work, honestly.)

Beckett and the boys figure out why Ford took the flight last minute: he was paid just under ten grand to follow an art courier who was travelling with a 13 million dollar watch. The courier, Aaron, was drugged, and the real watch stolen.”This was never about terrorism. It was a heist!” But who could have planted the evidence against Singer and had access to the flight manifest and arranged for Ford to move his suspicions off of Aaron’s watch and on to something else? Turns out it was Debbie, sweet Debbie, who bonded with Alexis as they searched for clues just a few hours before. Debbie turns on Castle and Alexis with a gun, bemoaning Oceanic budget cuts that eliminated her pension. Her plan was to steal the expensive watch, but when Ford caught on to her, she snapped and cracked him in the head. Alexis can see that she doesn’t really intend on using the gun, so she steps forward and talks her down. Debbie is detained, the others set free, and Castle and Alexis land safely at Heathrow, with a mystery story to tell the Holmes Society. Together.

This episode was a refreshing return to form for CastleÂ after last week’s baffling jumble of a story. The suspense was evenly paced, the flight crew staff was solid, and the twist was still believable, even if Debbie happened to have a lot of factors working in her favorÂ that she wasn’t in control of. It was great to see Castle and Alexis bonding and Alexis stepping into her own without being pushy or annoying. Often, she insists on doing things on her own (the Pi arc from last season), and it comes across as privileged and not from the grown-up child she was presented as early on. But she’s back on track, and it was wonderful to see her helping Castle in such a way. The weakest thing about the episode for me was the rest of the plane not wondering why Castle and Alexis were both running around with the flight crew the entire flight, watching over them like hawks. Way too obvious, you guys.

All in all, this was probably one of my favorite episodes this season, especially among the last few. Welcome back, Castle.