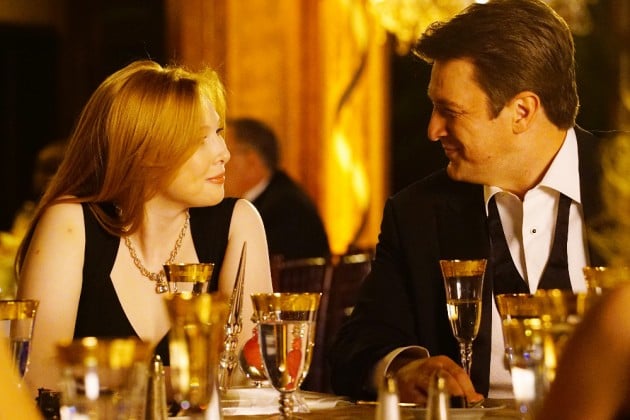 Castle ends its seventh season at its roots. Not when Castle met Beckett, but when Castle met his first mystery. We venture into Hollander’s Woods wondering why Castle became a mystery writer.

She was found in the woods with crosses carved into her face. Way back in Season 2, Beckett asks Castle what made him become a mystery writer. He spins a story about a boy on a beach and body washing up ashore, peaking his interest in the macabre. It turned out to be a fictional account, but the true story isn’t too far off. Castle, away in New Hampshire for the summer, heads into the woods nearby and finds a dead body. The victim, with crosses carved into her face, was attacked by a man in a mask: white porcelain with black streaks coming from the eyes. When a man with that same mask kills a victim, Emma, in the present, Castle is determined to find out answers. But Castle was 11 years old when he saw that man, and he’d convinced himself it was merely a dream.

“That day in the woods, Kate, that’s why I do what I do. I’m driven to figure out the story, because I could never figure out that one.”

This episode had many creepy moments, one of them being finding poor 73-year-old Connie in her house, having been dead and rotting for three YEARS. As you can imagine, as a person named Connie, that hit close to home. Castle and Beckett chase down a patsy under going psychiatric care. When they meet his doctor, Castle is convinced that the doctor is the masked killer. Just by the sound of his voice. Leading us to the creepiest moment of the episode: watching Castle’s face freeze as he listened to that man gave everyone chills.

Knowing how Castle sometimes lets his feelings get the best of him, I was very nervous as he and Beckett talked to Dr. Holzman. The way Castle kept goading him made me nervous Castle would either snap or Holzman would figure out they were on to him. Thankfully, neither happened.

Castle and Beckett follow their leads to the masked man’s lair. Castle goes in, leaving Beckett off Holzman’s private property in case they’re wrong, and is attacked by the masked man! He remembers Castle from 30 years ago and attacks him in the locked barn. Castle puts up a good fight, but he’s pinned at the neck with Holzman’s knife. However, the space under the door, where Kate frantically calls on the other side, has just enough room for her to pass Castle her gun. He kills Holzman, ending things once and for all.

All through this,Â Kate took the captain’s exam and was awaiting her performance review. When she gets an early one, she’s put off by the harsh attacks against her career thrown at her in the meeting. But our girl stands up for herself and impresses the panel, who merely attacked her as a test. “You’re wrong, sir. In every case you have references, I have not only successfully brought the killer to justice, but I did so with the utmost respect for the law.” They don’t just want her for captain, they want her to run for office! While obviously Kate in public office doesn’t play to the premise of the show, it’s an interesting plot direction to head towards for a (final? I’d be okay with eight being enough) season.

Castle is honored by Poe’s Pen Career Achievement Award, where he gives a lovely speech honoring all of his friends. Since contracts and a Season 8 renewal decision hadn’t been made when this episode was written, this final scene could have served as an ending to a series finale. It balances the line between an ending and merely a continuation, with the way they are all ready to go back to work at the end of the scene.Â Thankfully, our worries are over: ABC has renewed Castle for an eighth season and Stana Katic has renewed her contract, meaning all of our cast is returning.

As I’ve been saying all season, I think I could Season 8Â being the show’s last. So many loose ends have been tied up and the characters are aching to move on to new things outside of the 12th precinct. It’s been hard to advance them professionally and keep the group dynamics the same, but perhaps with a new showrunner, there will be a way to balance that gap. But I must say, Castle is one of the best long-running shows in that respect: keeping the same cast and work conditions with only one major cast member change without being too stale. But it’s either time to end it or upend the dynamics in ways that the show might not be able to handle. We’ll see how Season 8 pans out.

– “I don’t cross the line. I put myself on it.” Kate Beckett ladies and gentlemen.

– The swings make a delightful reappearance! Seems like Castle and Beckett now make all life-changing decisions on those swings.

– Lovely shout out to Kate’s mom. The episode references both Castle and Beckett’s origin stories.

– If Kate can “get [her] own precinct within a year,” should we be worried about Captain Gates? I hope she survives season 8!

– Everyone really disbelieves Castle this week, which would be more understandable, if we hadn’t spent all season with everyone not believing Castle’s story about his disappearance. But it makes interesting bookends for the season.

– Show creator Andrew Marlowe stated on Twitter that the speech scene was the first time every cast member was in the same scene at once. You can even spot LT and other precinct regulars in the background!

– Also, show creator Marlow, wife Terri Edda Miller, and other writers are in the dinner scene at a table. Spot them if you can!

– “There’s no doubt in my mind that you are going to be amazing. You know how I know? Because you already are.” Castle says this to Alexis and shows us once again that he is an amazing father. After he comforted and boosted Martha’s self-esteem last week, it’s only fair he do the same for Alexis this week.