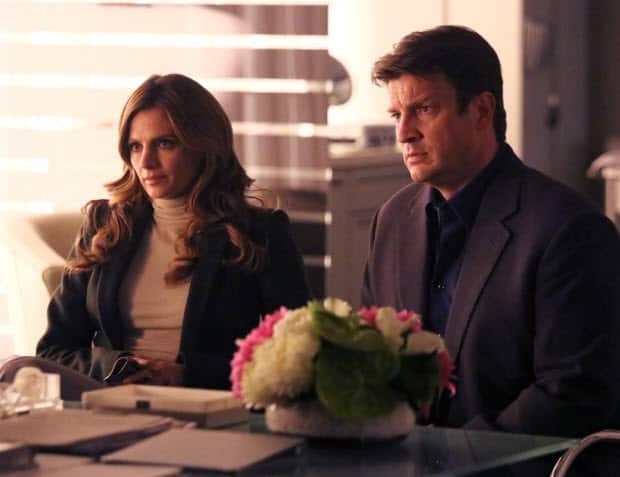 As if Castle season 8 wasn’t causing fans enough stress, there’s been news of the co-stars – Nathan Fillion and Stana Katic – possibly having other projects. Â Should they be worried? Â Probably not.

It was a small mention in a Variety article last week, but Fillion’s webseries, Conman, will be going to a whole new level. Â This is listed among a series of projects being done, so one might have missed it:

“Spectrum” the fictional TV show at the center of the “Con Man” series, will get its own TV show. (…)“Spectrum” is launching on Free Comic Book Day (the first Saturday in May) and is part one of a four-part series tied to the Web series “Con Man.”

There’s nothing in here about Fillion, but if you know anything about the web series then you know he plays the Spectrum’s captain James Raaker. Â Now, before anyone panics, just like Conmandidn’t keep Fillion from doing season 8 of Castle there’s no reason to think “Spectrum” developing into a TV series means he’s done with Castle.

Likewise, any new project Katic may be looking at doesn’t mean she’s walking away from the show. Â At the recent Independent Spirit Awards Katic was asked about what she considered the “independent spirit” in terms of film, and then about what projects she had on her plate. She talks about independent film being a “renegade spirit” with “a sense of community” and where everyone really “gives their all” for the project. Then she says this:

Katic: I am developing a, a cable-style television program.” (You can see the whole video here.)

Again, this doesn’t mean Katic has left the show. Â For one, developing a new project is not the same as having a new project. Â The other is that a “cable-styled” TV show is different from a network show in that they have their own shooting schedules and launch dates. Â If Katic were to do another season ofCastle I’m sure things could be worked out. Lawrence Fisburne did it when he was doing NBC’s Hannibal and ABC’s Blackish. Â Heck, in 2014 Gillian Anderson shot the BBC’s The Fall, NBC’sHannibal, and Crisis not to mention being in rehearsals forA Streetcar Named Desire to be filmed live for Britain’s National Theatre Live. MostÂ actors love being busy!

(On a totally different note, I love what Katic says about the independent spirit!)

With all the struggles Castle has going on with its ratings some might take the news of these projects as meaning the stars are already out the door. Â Â Yet, as you saw with Fishburne and Anderson, it’s not unusual for TV stars to have other creative endeavors going on beyond the show they’re working on. Â It doesn’t mean they’re done with their gig.

The truth is, it would be foolish for the stars to not be looking for other things. Â Both stars would have to negotiate new contracts to do another season of Castle. Â At season 9 this would make the show very expensive for ABC. Â It’s also no secret that the Castle season 8 ratings already have the show on the bubble in terms of cancellation. Â In a recent TVLine interview the new showrunners even discuss having to do what Castlecreator Andrew Marlowe had to with last year’s season finale – write it without knowing if the show is coming back or not.

With all the uncertainty around the show, it makes sense that those involved are considering new projects. Â It doesn’t mean they’re planning to walk, but they are preparing for the possibility of Castle season 8 being the last of the series. Â Who can blame them? Acting is like any other job. Â If you thought the company was having issues wouldn’t you at least be sending out resumes?