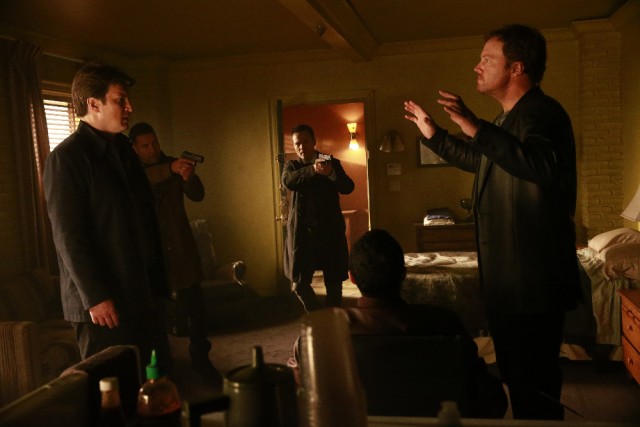 Had you never seen an episode of the show before, CastleÂ Season 8 Episode 6 likely would be amusing. Â Of course that’s been the problem with most of CastleÂ Season 8 – a complete disregard of the show’s history. Â  Writing an episode of a show in it’s eighth season but acting like it’s still in its first is annoying for a long-time viewer. Â  Things that may have been funny for writer Richard Castle (Nathan Fillion) to do in Seasons 1 or 2 end up making the character just look dumb. Â Unfortunately, that’s been the trend of plots for CastleÂ Season 8. Â Captain Kate Beckett (Stana Katic) has been sent back to Seasons 3 and 4 in terms of her obsessiveness, while Castle has been turned into something he’s never been – a total fool.

At least viewers didn’t have to watch more of Beckett staying away from Castle because she’s being driven by an obsession more powerful than finding her mother’s killer. (Yes, given Beckett’s history the only conclusion to make is that, unlike the situation in getting Bracken, finding the killers of the colleagues she worked with for a few months means so much to her that she’d rather leave Castle than just leave it alone.) Beckett is not physically present in this episode at all. Â According to an updated TVLineÂ article Katic had an “out” in her contract so that she could have a particular period of time off.

Had the production actually needed Katic in the episode they could have shot a scene or two before she left. Â Being that a different TVLine article notesÂ Â “…the episodes were filmed somewhat out of order” a scene shot out of order doesn’t seem like a stretch. Â Back in Season 6Â it was Fillion on vacation in Hawaii while Katic was filming Castle 6.17 “In The Belly of the Beast” – hence he wasn’t much in that in. Â  With Castle 8.06 Â really being about the reunion of Castle & Detective Ethan Slaughter (Adam Baldwin) it wasn’t considered necessary to do – and let’s be clear, that’s the point of all this:

“The last time they were together in Season 4, Slaughter almost Castle killed a good half dozen times, so we thought we would revisit that dynamic because the two of them are obviously so great together and they have history that stretches way before this show.” Castle showrunner Alexi Hawley in an onlineÂ Entertainment WeeklyÂ interview

Really, the problem with this, and the entire plot of CastleÂ Season 8, is that the new showrunners get these whims of plot ideas and put together episodes that don’t connect to the history of the show or characters. Â Why is Beckett acting the way she is? Here’s one version of the explanation (also from anÂ EW.comÂ article)

We really wanted to focus on shaking things up and trying to give some new energy this year and also to their relationship. For us, their love affair is the heart of the show and relationships have issues, so we didn’t want to do a one-dimensional, everybody’s-happy-all-the-time kind of thing. But on a bigger front, it just felt like there were some unresolved psychological issues, Beckett more so possibly than Castle, as the fallout of being obsessed with her mother’s murder for 16 years. How do you just turn that off?

It’s their agenda that is driving this story – not the characters and the journey viewers have been following for seven-plus seasons. Â For example: we watched Beckett deal with her obsessiveness in therapy and come to choose Castle over that obsession. Â Then we saw that she still had contact with Dr. Burke if issues came up for her that triggered that. Â Once her mother’s murder was solved and Bracken put away Beckett became a happier character – still bad-assed, but also (as stated in Hong-Kong Hustle) very clear that she had no intention of losing sight of her priorities. Â “How do you just turn that off?” You do it over several seasons of character development.

“Katherine is at a crossroads. Â The loss she suffered when she was young has just…changed her in ways that she is just now beginning to realize.”

She goes on to tell Castle to just “have faith” because things between him and Beckett tend to work out.

While I love the idea of Martha writing a book called “Unsolicited Advice” the advice she’s giving here is total nonsense strung together to hammer in the writer’s’ ideas. After all, the story being told about Beckett’s leaving is that Castle doesn’t know why she’s left. Â How the heck would Martha know it had to do with Beckett being obsessive and driven to find these killers – which would warrant what she says to Castle? Â This is Martha being used as a mouthpiece for the writers to push their idea and tell viewers not to worry it will all eventually be okay. Â Last season similar tactics were used to explain why why Castle and Beckett weren’t getting married right away after he’d been found and why none of their friends were at the wedding when it happened. Those were lame plots as well, but at least they didn’t mess the core dynamic of Caskett. (Remember when the stalling of the wedding was the worst thing ever? Who dreamed things could go any lower?)

The writer’s idea that a relationship breakup was the only way to keep things from being “one-dimensional” is sad. Â Things occur that complicate relationships all the time – it doesn’t mean people break up. Â After all the time the show took to build a strong foundation for the Castle and Beckett marriage, this season acts like there’s been no work there at all.

This brings me to the point ofÂ CastleÂ Season 8 Episode 6. Â The desire was to reunite the Firefly alums Fillion and Baldwin. Â In fact Hawley doesn’t even bother differentiating the actors from the characters. Â The problem is that the original character of Slaughter was written as a truly horrible character with no morals, no regard for safety, the law, or Castle in general. Â  Why on earth would Castle trust or work with this guy again?

The answer is that while both Martha and daughter Alexis Castle (Molly Quinn) are quick to remind Castle of how dangerous Slaughter is, a promise by Slaughter to tell Castle some crazy story is enough for him to agree to work with him.

Now, if you hadn’t seen the first episode with Slaughter you might buy this. Â The problem is that it’s the idea of getting crazy stories from Slaughter that intrigued Castle the first time around. Â It nearly got him killed (several times), he learned just how much of a liar the guy was, and we saw Castle lose all respect for Slaughter. Â Yet, Castle jumps right back into working with Slaughter for the promise of a story? Â It makes Castle look like an idiot. Â Then again, so does this whole idea that Castle needs to win back his wife because he has no idea that her leaving might be connected to the case of her colleagues being killed. Â Maybe that’s because the move makes no sense? Â However, since the incidents occurred so close together it’s the kind of thing that Castle – prior to this season – would have put together.

So much of what happens in the episode is about finding ways to set up “fun” Baldwin and Fillion scenes. For instance, the final bit where they’re about to to be killed and break into the song “Cool” from West Side Story – hence the “official” point of the show title “Cool Boys.” I suggested a few others in myÂ Castle Get Ready for November SweepsÂ article. Â The whole thing about Â saying he was a musical theatre major in college is part of that set up. Â Maybe Baldwin was one, but Slaughter? Â In that same article broke down why Castle stealing the car of detectives Kevin Ryan (Seamus Dever) and Javier Esposito (Jon Huertas) is a real betrayal of CastleÂ – by Castle. These guys saved his ass from Slaughter’s reckless schemes in season 4. Â Yet he’s taking Slaughter’s side over theirs and is willing to get them in major trouble. Â Sure, without any character history this little switch could be funny, but there is a history, so it’s not.

As for that whole Slaughter’s ex-wife story? Again, it’s all so that Slaughter can do this “meaning” talk with Castle that ends with Slaughter telling Castle that in Slaughter’s case the inability to be man enough put his wife’s needs ahead of his own is what cost him his marriage and that Castle shouldn’t make the same mistake. Â Furthermore Castle shouldn’t “ask permission” for Beckett to let him in. Â What the hell did any of that conversation had to do with what’s been happening with Castle and Beckett? Nothing, but somehow it’s supposedly going to give Castle great insight into what he needs to do to get his wife back.

Supposedly, we’re supposed to believe that the guy from Season 4, and who in this episode is giving the barely legal Alexis the once over and hitting on Hayley Shipton (Toks Olagundoye) is able to “understand” how to deal with a real relationship. Â (I can’t get into my thoughts about the fact that apparently Hayley now works for Castle. In this case Hayley was an easy way to cut down on having to show finding out procedural information, and it’s better her than having Alexis as the wonderkid do it.)

There’s so much about this Castle episode that, as a long-time, viewer was annoying. Â It was hard to focus on the things that worked. I think the actual case had some merit and I enjoyed the actor who played Louis, the sixteen-year-old genius. Â Plus, Martha is always amusing, even when her unsolicited advice is not.

I’m curious to see how other viewers found this episode. Â On top of all the things I’ve mentioned the general tone of CastleÂ Season 8 Episode 6 wasn’t like an actual Castle episode at all. Â Did anyone else feel like it was a completely different show? Â Let me know in the comments.

Want more news and reviews of CastleÂ Season 8 and other shows? You can follow me onÂ Twitter.