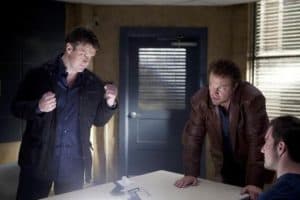 Nathan Fillion’s former Firefly co-star, Adam Baldwin, is making a guest appearance on the upcoming April 16 episode of Castle. Given how the last episode ended, we’ll put our money on Becket and Castle being at odds in the next episode. In fact, ABC warns that “tensions [are] rising between Castle and Becket.

So Castle heads out to find himself a new partner: Detective Ethan Slaughter (guest star Adam Baldwin). Baldwin’s character is a tough, but colorful, cop from the police’s gang unit. Of course, Castle soon realizes that he’s in over his head when Detective Slaughter shows him a side of the job that puts him in more danger than he’s ever been in before. But will Beckett come to terms with the state of her relationship with Castle before it’s too late?

Watch three sneak peeks below for the April 16 episode of Castle, airing at 10:00 p.m. ET/PT on ABC. To browse through more photos for this episode, click here.