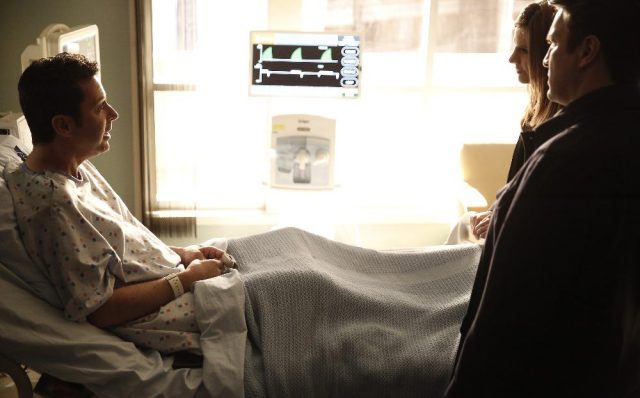 Do you see a picture of shark fins in the water….

Is Castle, “Dead Again”? Â Last season Castle fans were concerned about the fate of show continuing. This season there is also concern, albeit for different reasons. Unless you’ve been completely media free this past week you’ve heard the news that ABC’s Castle has decided that if they do a Castle season 9 it will be without the show’s co-star Stana Katic and the long-time cast member Tamala Jones. Respectively, the two play Captain Kate Beckett & Medical Examiner Lanie Parish – and the characters are best friends. Â The reaction from fans, reviewers, and even the entertainment business community, has been one of disbelief. Â It has also created an outpouring of sentiments stating the hope that a Castle season 9 never sees the light of day.

Fans are heartbroken at the idea that the couple they’ve rooted for over the last eight seasons is being tossed aside like trash, with little thought or concern about the viewers investment in the show. Â ReviewerÂ Matt Roush from TVinsiderÂ describes the situation best:

Dignity went out the window a while back, given the way the producers have jerked these characters, and Castle‘s fans, around for so long. But this does seem like the last unnecessary straw to keep this franchise going by shattering its core.

Roush is addressing the poor treatment of the fans, the show’s recent bad writing as well as the fact that the center of the show’s storyÂ is the relationship between writer Richard Castle (Nathan Fillion) and Beckett. Â Unlike a show like Monk – or to go really old-school, Kojak – ABC’s Castle has never been about Richard Castle. The show is about the pairing of Castle with Beckett. As one smart fan tweeted, every single DVD case for the past seven seasons have featured them on the cover.

Maureen Ryan, the chief TV critic at Variety, which is like, theÂ entertainment business daily magazine, isn’t concerned about the story. She called ABC out on the Kelly Ripa situation and the issue with Katic & Jones as not only one of Hollywood sexism, but in creating bad P.R. for the network – which is bad business. Â Even though the official reason for the firings were “budgetary” Ryan dryly notes that watching ABC trying to “navigate” the bad publicity while trying to sell ad time at the Upfronts in May should be, “interesting.”

ABC’s big response to all the negative press appears to be to increase advertising for the Â show as fans have been commenting online about Castle ads popping on television in places where they usually don’t. Â It makes sense because with only four episodes left ABC is going to have to convince advertisers that the news of Katic and Jones not returning is something that won’t really hurt a Castle season nine. Â Hence keeping the show’s ratings somewhat steady will be imperative for the network – which is a problem given the reactions fans and the media have had. Â However, even without the announcement, the promo for Castle 8 x 19 was never exactly promising.

Castle, “Dead Again” is a straight play on the Castle season 4 episode, “Undead Again.” (Surprise, they’re trying to rip up season four again!) Gee, someone appears to be dead and then turns out not to be – just like in Castle 4 x 22.

The problem with referencing season four’s “Undead Again” is that doing so completely kills the premise of this one! Castle, Beckett, Lanie, and Ryan have already dealt with a case where someone appears to be dead but they aren’t. After the initial shock no one should be freaking out like this, and Castle certainly should not be jumping to the conclusion that the “victim” is immortal and/or a superhero! Â For a long-time viewer, this entire story is yet another attempt at trying to rewrite the past. Being that “Undead Again” was such an excellent episode (Remember, “The killer’s a zombie!”) “Dead Again” is bound to fare badly in comparison.

Over several seasons the episode writer, Robert Hanning, has proven himself to be a great Castle writer – but he’s not the showrunner. Â In crafting an episode he has to work with whatever points he’s been given. The directive for Castle season eight has been to feature Castle in silly situations so that Fillion can do long comedy bits, keep the scenes between Castle and Beckett short and to a minimum, and you get bonus points if you can in some way make Beckett look crazy or in some way degrade her character.

On top of the above normal season 8 parameters, these last few episodes are all part of an arc designed to lead viewers towards Beckett’s character exiting the show and destroying the best part of it. We’ve already had, “Backstabber” which is appropriately named since it’s all about trying to get the audience to buy into Hayley Shipton (Toks Olagundoye) bonding with Castle and his daughter Alexis (Molly Quinn). (Note that I said it’s trying.).

In sharp contrast, “Undead Again” in season 4 was part of the arc designed to bring Castle and Beckett together in its epic season finale, “Always.” Â When you see all the handicaps “Dead Again” had before a word was written, the best a viewer can reasonably hope for are a few scattered scenes that will shine because of Hanning’s touch. Â He simply hasn’t been given all of the pieces needed to write a great episode – especially when placed next to, “Undead Again.”

The ratings for the previous episode, “Backstabber” are the lowest of the season and the series. Was that because viewers weren’t interested in a Hayley focused episode or because of the news about Katic and Jones? ABC is hoping that it’s the former, and in an ironic move the bait the network is using to get viewers to watch this week is…promoting more of Katic, Jones, and the Caskett relationship! Â Check out the progression of these sneak peeks!

This sneak peek is sad. Castle is way over the top in it – even more than he was with the genie idea in Castle 8 x 17. Remember, this all starts because the victim appeared to be dead but wasn’t – just like in “Undead Again.” Â  It was soon proven that the phenomena was caused by a special drug.

Still, even though Castle has his time of thinking it could be a zombie, creator Andrew Marlowe knew staying there would be too much given where the character had developed to. Â In fact, in “Undead Again” Castle tells Ryan that he’s pushing the zombie idea just to annoy Beckett. Â Here in “Dead Again” Castle’s in full-blown belief about a superhero. Why? Because in the story synopsis for Castle, “Dead Again” the would be victim will “come back to life” not once, but twice.

When a mild-mannered safety inspector for the city (guest star Jonathan Silverman) miraculously survives a poisoning, it might be luck; but when he survives another, it’s a mystery Castle and Beckett will have to solve.

One would think that having seen this kind of thing being caused by special drugs before, Castle would have gone there again. Â Nope. Â He’s all about the superhero idea.

This sneak peek is the most we’ve had from Lanie all season. It’s great to see her! The dynamic between her and detective Javier Esposito (Jon Huertas) is still fun. The only thing that’s off at this crime scene is the need to position Castle in a way that makes him stand out instead of being part of the ensemble dynamic. As soon as he steps away to do his grandstanding the scene starts to go flat. It’s saved by the “dead” victim walking in and the Laine/Esposito bit.

I guess they want viewers to know that Beckett’s in the episode. Thank God for the voice of reason to interrupt Castle’s ramblings – because that’s what makes it an actual joke. This season the tendency is to let setups like that run too long and then they become tedious instead of funny. For instance, the guy rambling on the phone goes just over the line from being funny to being stupid. I’m also not thrilled with the, “As a cool man, you call it a journal.” In today’s world that’s true for anyone – male or female – who’s gotten beyond junior high.

This fourth sneak peek is short – but it features Caskett….

This scene has all the buttons viewers are used to: Castle watching Beckett sleeping in that soft morning light with a loving look is straight out of season five’s “Still” while Beckett calling actions Castle takes regarding her as “sweet” is almost as big a thing as the code word “always.” Â However, isn’t it interesting that Castle pushes the point until Beckett turns away from him? I guess the writers have to go that way because god forbid it leads to a moment where they actually connect.

To get a sense of how all these sneak peeks have been received, I noted the number days each had been out and how many views were listed when they played.

I’m sure some math geek could give you the exact rate, but clearly both the Caskett scene and the scene with Castle and Beckett are being viewed at a faster rate than the first one. Sneak peek 1 was released before sneak peek 2, so it’s a little harder to gauge what that gap is about. If you want a larger sense of how these are all being taken in, take a look at the list on YouTube when you search for Castle sneak peeks 8 x 19. Those results come in order of popularity, and the top four literally run backwards with the most popular one being sneak peek #4 – while sneak peek #1 is last!

The fact thatÂ as it’s gotten closer to air time ABC chose to show sneak peeks pushing Laine, Beckett and Caskett as being an important part of Castle, “Dead Again” shows they know what viewers want to see. Â It doesn’t change that they don’t actually care what viewers want. All ABC is doing right now is trying to reel viewers in so that they have the numbers to show advertisers in the upcoming May Upfronts. They need to be able to say that the news of Katic and Jones leaving didn’t have a big effect on viewing to support the idea of a Castle season 9 without them. It’s exactly what fans don’t want, but ABC is hoping to use the viewers love of the characters to get them a Castle season 8 finale designed to break those same viewers hearts while giving ABC a Castle season 9.