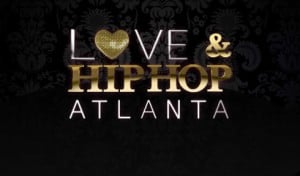 It’s been five weeks since VH1 brought Love & Hip Hop: Atlanta (aka As The Rachetness Turns) back to our airwaves after a record-breaking inaugural season last summer. Unfortunately this particular blogger fell behind on the latest tomfoolery of Stevie J and crew after the first episode (blame other primetime dramas worth dissecting), and because of that faux pas I’ve let a lot of new pop culture references fly clean over my head like “super” Miguel trying to clear a landing at this year’s Billboards Awards. However thanks to my ‘trusty’ DVR and personal days from work, I managed to catch up on the latest fights, breakups, and hookups from the Love & Hip Hop: Atlanta cast this past week and while most would say I didn’t miss much, I can’t help but say it’s good to be back in the ‘A’ with these jackasses.

While binge-watching Stevie J and Joseline run circles around their castmates in the race to retain their titles as LHH:ATL‘s Most Ratchet Players, I noted several tidbits that either irked me or had me rolling clean off my bed in hysterics. So here’s my list of the top five moments of Love & Hip Hop: Atlanta‘s second season so far.

This year, Mama Dee has taken meddling to a whole new level by doing her damnedest to eliminate any happiness between her son Lil Scrappy and fiancÃ© Erica. But one thing was for sure, Erica was three insults past doneÂ with the self-proclaimed Queen trying to reign over all of their lives and called her future mother-in-law out during a dinner between Scrappy, Erica, Mama Dee, and Erica’s mother. There were 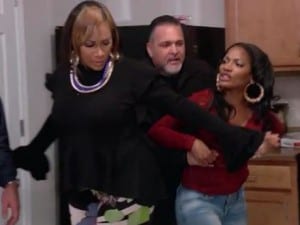 several things about this “dinner” that predisposed how the outcome would be anything other than civil, but I didn’t expect it would get to the point where Scrappy would be asking for Erica’s engagement ring like a disgruntled kid asking for his XBox controller after getting his ass handed to him in a game of Madden.

While Erica was a bit out-of-pocket for lunging for Mama Dee, I can’t help but say that Scappy’s mom asked for it in a sense. What else can you expect from someone who’s been pushed so far into a corner for so long? Also, I’m shocked (and tickled) over how Erica’s mother (whose name escapes me at this point) was the calmest person in the bunch. Maybe Erica should have followed her lead? Just saying.

As soon as Karlie Redd let slip that her ex and Stevie J’s best friend Benzino claimed to have slept with Joseline, I knew that the situation was going to get butt ass ugly and it damn sure did.

Now do I think Benzino slept with Joseline? No way under the sun. Joseline isn’t about to mess up her money like that, so I don’t think she would be that stupid to give up the goods, even if Benzino stooped low enough to ask her. As to whether Benzino actually said what ended up being a fatalÂ bullet wound to his friendship with Stevie J? That’s a whole other story. With that said, it was somewhat ‘painful’ to see two buddies come to blows over someone like Joseline, but it is what it is and hopefully this will be resolved by season’s end. Because let’s face it: Stevie J needs someone in his life who is willing to explain to Master Splinter that the world doesn’t revolve around him nor his “bus.”

I might be in a minority, but I’m so not feeling K. Michelle this year. Sorry, I’m just not. With that said, I can see where Rasheeda was out of line by throwing the first verbal insult that lead to Candle-gate in Mimi’s apartment and the rapper/singer had to do what she had to do. Although, I wouldn’t have damaged someone’s apartment in the process, but to each his own. The fight was hilarious, yet unnecessary, and only landed on this list due to sheer ratchet factor of it all. 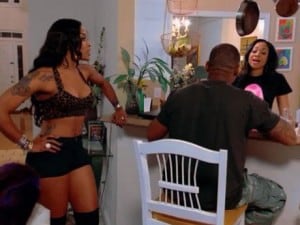 When I saw this particular scene in Love & Hip Hop: Atlanta’s supertrailer earlier this year, I immediately began work on my last will and testament, because I knew I was leaving this world by laughing my ass off on April 22, 2013.

How do you walk in someone’s house as if you stay there and address the person’s baby mother as “Maid?” In the fur coat this man bought you and not much else mind you? Man, when I tell you that I was done with Joseline Hernandez at the moment… But then it got even better! Not only did Mimi go ham on Stevie J for even letting the disrespectful exchange take place, but she snapped at this man’s cheek like raptor from Jurassic Park. She was that damn pissed and I was enjoying every minute of it. Luckily, Mimi knew then that her plan to stay at Stevie’s to keep Joseline at bay was not working (nor was it ever going to work), so she packed her and her daughter’s bags and left Casa Whack Ass immediately. Unfortunately for everyone, this only raised Stevie J’s creep factor to epic levels of foolery.

Lord, where do I begin with this one. Che Mac’s thirst on this past week’s episode was beyond bearable. She made a raging Californian forest fire look like a light bonfire in comparison to her throwing herself on Stevie and Joseline like a wet hood rat looking for her next slice of government cheese. I mean she acted as if Stevie J was (is) the producer to go to in Atlanta and without him her chances were shot all to hell of ever getting a record deal. And the sad thing? I bet Stevie J is going to end up sleeping with Elvira, 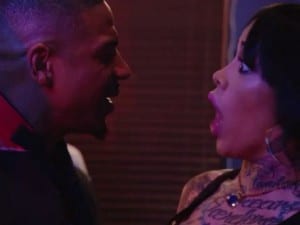 because her thirst is so clear to the point that Stevie J can control and mold it to his liking. Joseline, you better watch your back…

So that’s my take on Love & Hip Hop: Atlanta Season 2 so far. Am I on point with the general consensus out there? What are your thoughts?