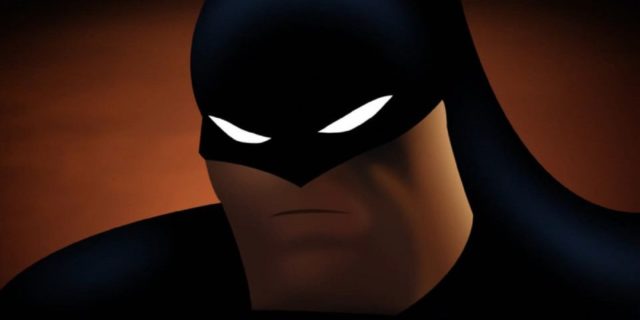 1992, the Batman was still a popular hero but he’d been just about played out in comics and the big screen. So what was left? He’d had a run on the small screen as well, but nothing had ever stuck for that long. Those in charge had to come up with something that would allow Batman the kind of comeback he would need, one that secure his legacy moving forward. Enter Batman: The Animated Series.

The cartoon version opens up in Gotham with zeppelins scouring the city below, keeping a watch upon Gotham as they attempt to keep the city safe and virtually crime-free. Then two dark shadows can be seen skulking about, their intent sinister thanks to the faint music that can be heard. The following explosion we hear from the nearby bank entrance is proof that they’re up to no good. The cops are already too late. That means it’s time for the Batman to make his way onto the scene.

Arriving in the customary vehicle we saw from Tim Burton’s vision Batman takes to rooftops to surprise the crooks, who are obviously not expecting him as they come up short. Their surprise turns to predictable anger however as they pull their guns, only to wince in pain as one of Batman’s various bat-a-rangs slices through the air and knocks the weapons from their hands. Without any further warning Batman pounces, driving one man to the ground hard enough to stun him. The other man attempts to fight back but he’s no match for the dark knight, who ducks aside from the crook’s blows before delivering his own for the KO.

As cops arrive on the scene they note the trussed up forms of the crooks, each one of them looking worse for wear as the police can only scratch their heads at what they’re seeing. Off in the distance we see Batman again, backlit by a flash of lightning as he stands resolute, looking over the city he calls home.

This is Gotham, and this is his territory.

The animated series brought forth a wide array of villains that had only ever been seen in the comic books before the show, and was a major hit with kids and even a fair number of adults. It brought to life the vision of Batman from the past and the current era to create a show that was perfect for the time period. Â The villains were perfect in many ways even if the animation was a bit choppy at times. Batman and his villainous entourage were rebooted in a way that allowed for the fantastical and wouldn’t look at all cheesy when it came to special effects or the limitations imposed by budget and/or the safety of the cast.

As a cartoon Batman was the legend we all remember from the comics, the superbly fit crusader that could do almost anything and take on a wide array of villains that should have been far out of his class. In rendering him as an animated hero once more the makers of the show gave Batman the chance to become a legend worthy of the comics.