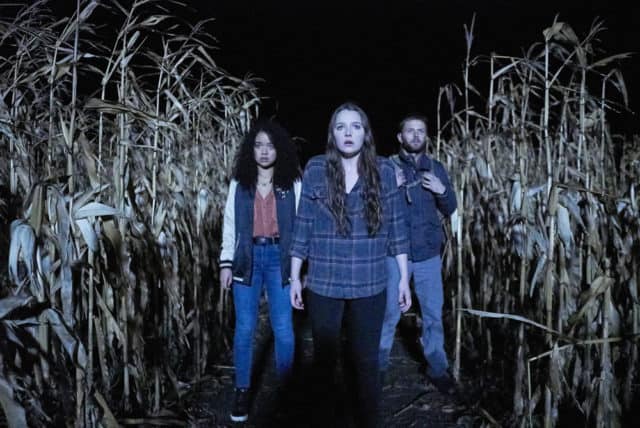 Over the first half of its season,Â Channel Zero: No-End House has proven that it deserves a place among the best horror seasons in television history, and the justification looks to continue through to the conclusion of the story. Let’s take a look at the beginning of the end with this week’s new episode, “The Exit.”

The previous episode ended with the gang deciding that they were going to try to leave the No-End House, and “The Exit” shows that journey. he first few minutes of the episode features anÂ incredibly unsettling sequence of the “tenants” of the House following Margot, Jules, and company down the street. It’s a pretty brief section of the episode, but it gives off a very creepy vibe reminds viewers of exactly what’s going on in this place. It’s impossible to talk enough about how much the setting ofÂ No-End House makes the show even better, but so much of the horror is derived from the unsettling nature of the location.

Too few shows rely on one strong aspect to express quality (with varying success), butÂ Channel Zero has continued to spread the love around to every element of the series. As great as the setting ofÂ No-End House is, it’s nothing compared to the strength of the characters and the actors behind them. I’ve talked a lot all season about Amy Forsyth and John Carroll Lynch delivering phenomenal performances every single week, but the past couple of episodes have really allowed the rest of the cast to shine just as much. Jeff Ward’s Seth has turned into one of the most riveting characters of the season. I absolutely love what Nick Antosca and the rest of the crew behind the show have done with him, and it’s one of the neatest twists of a season filled to the brim with clever turns. Seamus Patterson has also been underrated all season as JT (and fake JT), but he had some very strong moments in “The Exit” that I absolutely adored. 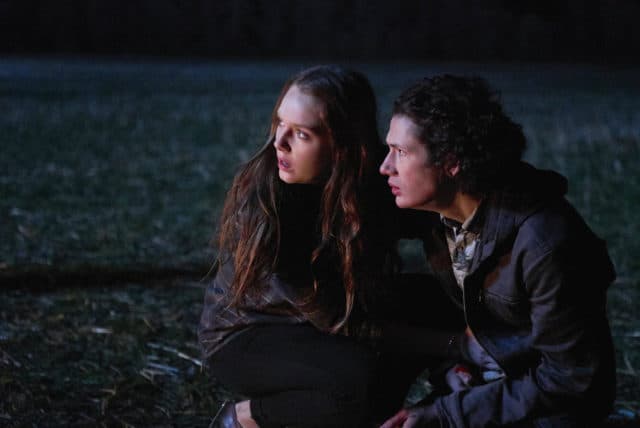 If all of the great things aboutÂ No-End House could merge in a single moment, it would be during the corn maze near the end of the episode. Corn fields have been a staple in horror for a very long time, andÂ Channel Zero takes advantage of this trope perfectly by throwing in an encounter with Lynch’s The Father during an intense moment of the cast trying to escape the house. The Father is such an incredible villain that works both physically and psychologically, and John Carroll Lynch proves once again that he’s a master of his craft.

I’ve loved how visually exciting every episode ofÂ Channel Zero has been, but there were a few specific shots in “The Exit” that made me pause the episode just to completely take in. Of these, the best (and most simple) may be The Father’s face on a podium inside one of the rooms of the No-End House. Isaac Bauman has been killing it all season with his cinematography (and Steven Piet’s direction), and I’m already depressed about this season ending since it will mean and end to these visuals every week.

All season,Â No-End House has been thrilling at every turn, and “The Exit” has propelled the story into some incredibly exciting new territory. The episode doesn’tÂ quite match the perfection of “Beware the Cannibals” (though it comes pretty close), but it does further establishÂ No-End House‘s place among the horror greats. This season is one that creators will study extensively for years to come, and audiences will be better off for the stories that follow that will have been inspired by this caliber of storytelling.

What did you think about the new episode ofÂ Channel Zero: No-End House? How do you think that the story will end? Let us know your thoughts in the comments down below, and tune in next week at 10/9c on Syfy for a new episode!

Channel Zero: No-End House continues to impress with “The Exit,” further establishing itself among the horror greats.