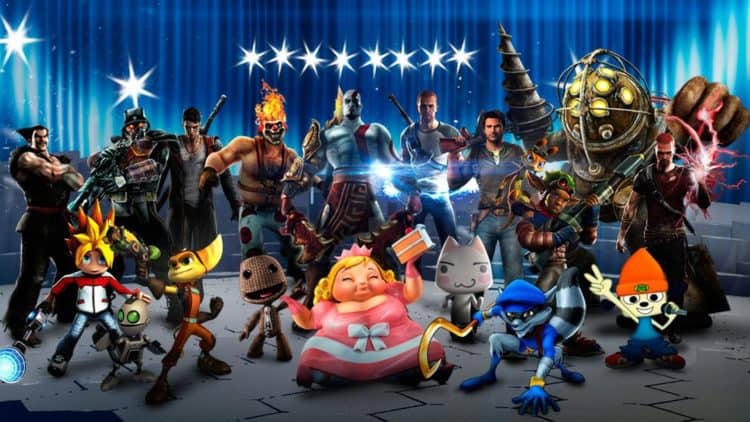 Playstation All-Stars Battle Royale is a crossover platform fighting game developed by Superbot Entertainment. In Playstation All-Stars four characters, all iconic Playstation heroes and villains, fight to knock each other out of the stage and gain a point. You build up All-Star Power by attacking other players and then use that to gain KOs. It was a simple formula that quickly became addictive. Not to mention that fans of Playstation were finally given a chance to see their favorite characters come together under one game.

Unfortunately, it didn’t sell as well as Sony had hoped and talks of a sequel are currently non-existant. But with all the new series currently being introduced and their expanding roster, we hope that Sony can go back to the drawing board and introduce a sequel to the newer generations. The original was only released on the PS3 so it would be interesting to see what a title on the PS5 would look like and how many players that roster could handle.

Currently, the original has a roster of 24 characters which include:

Taking these into account we want to see some of the newer series put into Playstation All-Stars Battle Royale. Series like Horizon Zero Dawn, The Last of Us, Astro Bot, Bloodborne, and even the iteration of God of War. Here are a few characters we’d like to see added.

Horizon Zero Dawn has become one of the flagship titles for Playstation with their iconic lead Aloy. We’d love to see what she could do in Playstation All-Stars. Her move set could make use of the iconic weaponry that she gains throughout the series and her traps. She would be a much more tactical character. Her ultimate could make use of the ThunderJaw and other creatures that she could take control of during the series. We’d also love to see a stage that takes place in the Horizon Zero Dawn world. The combination of technology and nature is mesmerizing and it could be interactive thanks to all the creatures that frequent the land.

Astro Bot became a hit thanks to the incredible gameplay is presented as a platformer. It would be great to see it in Playstation All-Stars because Astro Bot could make use of his platforming abilities to get the upper hand on their opponents. Their abilities could also make use of its gadgets to make sure that it is versatile enough for players to enjoy.

Ellie from The Last of Us

Ellie from The Last of Us would be a great addition because she is one of the most iconic PlayStation characters currently. After guiding her to safety in the original Last of Us, Naughty Dog allowed you to control her as one of the main protagonists for The Last of Us 2. Her skill set could include her bow and hearing capabilities. It could also make use of her maneuverability. We’d love to see a ruined Seattle as a stage as well.

Knack would be a great addition because of how different the character is compared to the other more humanoid characters. His abilities could make use of his ability to change size and come apart. We’d love to see him get smaller as he took more damage until he was finally so small that he’d get knocked out in one hit. This could be balanced by making his biggest form have great damage and torment the stage.

Atreus from God of War

We already have Kratos. Now we need Atreus. With his ability to use the bow and it’s special status effects it could be interesting to see him do buffs and debuffs. This would have to occur after God of War: Ragnarok is released and if Atreus is a playable character. I don’t think Santa Monica Studios would want the first playable iteration of their character to be in a crossover spin off title.

Nathan Hale from the original Resistance series would be a great addition due to his unique abilities. Throughout the series Nathan Hale is a soldier that helps protect the world from the Chimera invasion. Unfortantely he is infected with the virus. This makes it so that towards the end of the series Nathan is able to use extraordinary powers before completely being overtaken by the virus. If his infected state was the abilities that were implemented into the game it would be interesting to see what they would be.

The Hunter from Bloodborne

The Hunter from Bloodborne would be a great addition and could be a character that is customizable. His main weapon could be changed out and change his skill set in doing so. He could function similarly to how the Pokemon Trainer functions in brawl. It would also be interesting to see if his costumes could be interchangeable and represent different outfits from the game.