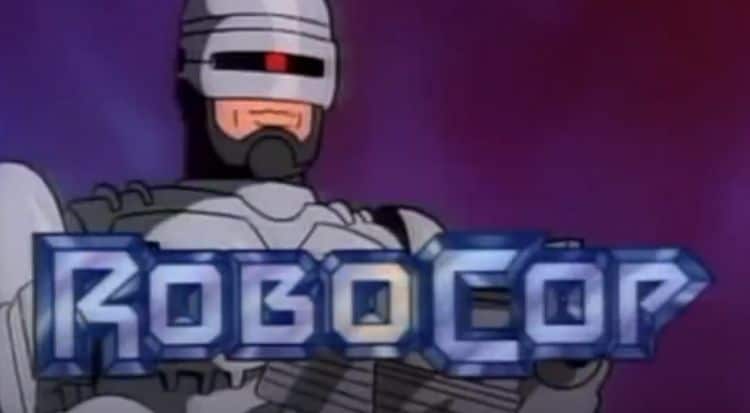 To be fair I’m not sure which is more disturbing, the fact that Robocop was made into a cartoon, or that he’s now included in a Mortal Kombat movie with fatalities that pull from the original movie, with the most liberal amount of gore possible of course. Damian Damaske of Joblo puts it accurately enough when he says that Robocop had to work hard not to get slapped with an NC-17 rating, so it’s difficult to think how anyone looked at it and said ‘let’s market it to kids’. Of course given the reaction to the movie it’s pretty easy to think how toning down a lot of the violence, or implying it without showing it, could work for a short amount of time. But by and by it’s too easy to think that Robocop’s reputation was bound to take him from the animated stage back to the big screen, or relative obscurity, since the idea was great for the time but didn’t evolve as much as it needed to. The idea of an evil corporation was of course a big draw since it was easy enough to get people thinking that there was some huge, unfeeling, uncaring company that was interested in profits over their humanity and would do anything to increase the former while sacrificing the latter. That’s the story of Robocop in a nutshell really, OCP wanted to privatize law enforcement and as a result they needed the next big thing that could help them do just this.

There was quite a bit in Robocop that couldn’t make it to the cartoon version, not the least of which was the one shot in the movie that took only a minute or two but was still seen as one of the more defining moments, the nut shot that Murphy managed to hit unerringly through a hostage’s dress. It’s still one of the more talked-about scenes in the movies and if you can believe, an action figure was actually made of the guy that had his manhood blasted by Murphy in the movie. Likely as not it was a limited supply but it’s still insane and pretty funny that this happened. It wouldn’t be that surprising to learn that there might have been ideas for making the melted crook that was splattered into goo during the movie, but considering how disturbing this might be for younger viewers there was no way that it was going to make it into the cartoon. Even saying that I can’t hold a straight face though since cartoons have been breaking boundaries for a while now since they’re constantly finding new ways to amuse kids and even adults and in doing so they tend to break free of whatever norm that people are used to. At the time it came out though the Robocop animated series would have likely been canceled very quickly had they gone the same route as the movie. After all Murphy was blown to pieces and there were other moments in the movie when the violence tended to get a little out of control.

The cartoon was a bit out of control simply for the fact that it had to be in order to make any sense and to keep competing with the other programs that had already been established. At one point it was seen, as it was in the trailers, that Robocop could somehow catch a tank in midair and not only keep it from crashing to the ground, but casually throw it back at his attackers like it was a medicine ball. It’s been seen throughout the years and theorized that Robocop is indeed a very powerful character, but the thing about that is that he’s only as powerful as the story can make him and in this case he definitely became overpowered in the cartoons. This wasn’t the only place he became overpowered since throughout his history it’s been seen that he’s able to take on characters such as the Terminator and come out victorious, which might confuse some people, even if it does make a bit of sense. In a big way Robocop became a cult classic and as a result his power levels managed to get jacked to an extreme that wasn’t necessary to be realistic, but still made him more entertaining since he was no longer just a cyborg cop that was insanely tough, he was a badass that could take on some of the toughest beings in pop culture and possibly walk away.

As far as the cartoons go it might be feasible to bring them back to the public but it’s not likely to happen unless an adult animated series is put up for discussion, since Robocop, despite being fun for kids, has definitely been a lot more convincing when being formatted for adult viewing.