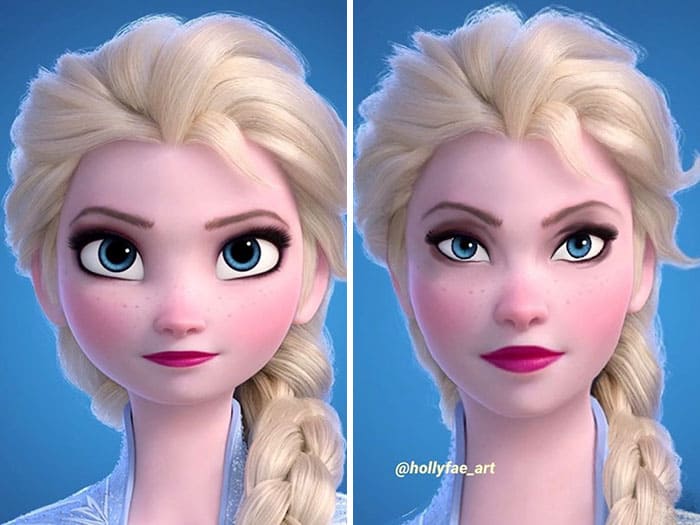 Disney characters have huge eyes, exaggerated features, and often don’t look like something you’d see outside of a toy aisle, and yet a lot of this is done for marketing purposes since when you really look at it, they look innocent, friendly, and more conducive to the fantasy that they’re pushing. Looking at Elsa side by side with her movie and more realistic self one can see that the bigger lips and slightly smaller eyes give her a very different look, and lessening the roundness of her face definitely changes things a bit. Even her hair appears to change just a bit, losing the bigness that it has in the Disney version. It’s incredible what happens when animated figures are given a more realistic look since if a person really wants to see Elsa in a different light all they really to do is watch the episodes in which she appears in Once Upon a Time. Then you’ll see a very convincing Elsa as well. Hats off to Hollyfae, since the artist did manage to capture the same essence in a much more realistic sense. 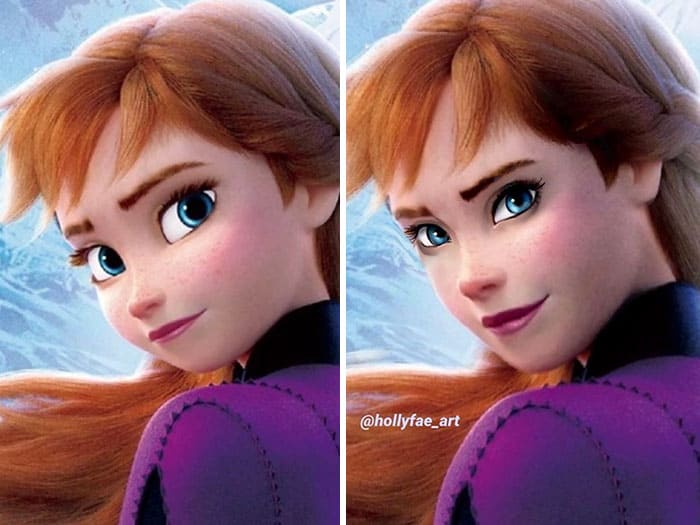 Anna takes on a look that suggests that she’s a bit mischievous and doesn’t like being told what to do. One could argue that a lot of redheads can go from being nice and kind to being absolutely fierce and determined in short order, but the same holds true for a lot of people, which means that redheads have for some reason been given a reputation that they might have earned, or not. But looking at the Anna on the right it does feel that she’d be more inclined to think a little more before charging off on an adventure. Or not, it’s hard to say. 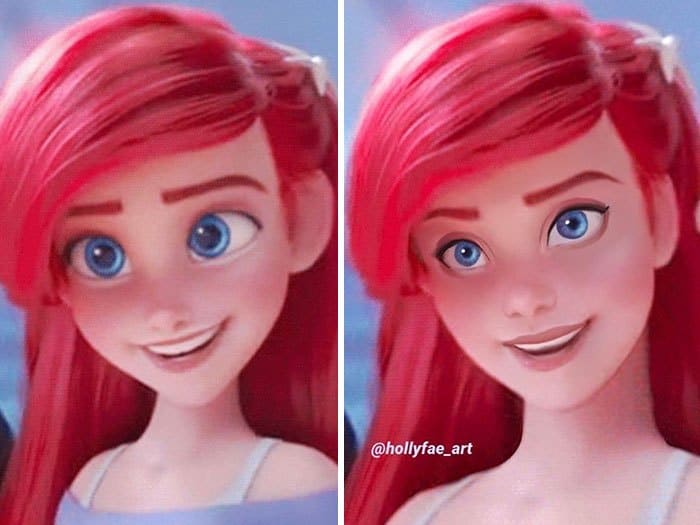 Somehow the more realistic Ariel on the right doesn’t look quite so naive and might have seen a few things in her life. Of course, there does appear to be something about the eyes of the Ariel on the left that suggests that she’s seen plenty, but she’s wisely forgotten about it or doesn’t bring it up that often. Sometimes big eyes can convey more than they should, while smaller eyes tend to convey that the world hasn’t exactly broken a person, but they’ve endured it and pushed through in a way that suggests that they’re wiser for the experience. Or maybe I’m projecting. 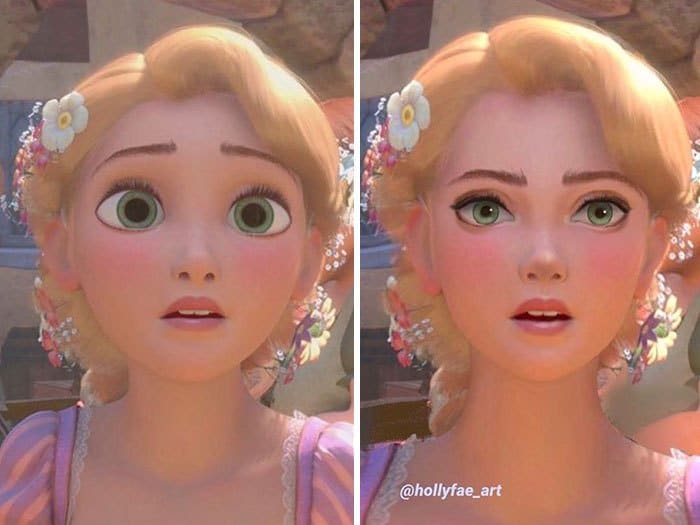 If Disney ever feels like taking on a live-action version of Tangled this kind of feels how Rapunzel will come out looking since the two are almost spot-on identical apart from the realistic features of the right picture. Something about the big eyes on the left just says complete innocence and naivete, while those on the right say that she’s a bit guarded and even a little hesitant. Again, emotion comes from the eyes a lot of time, as this is one thing that can’t be hidden that easily. 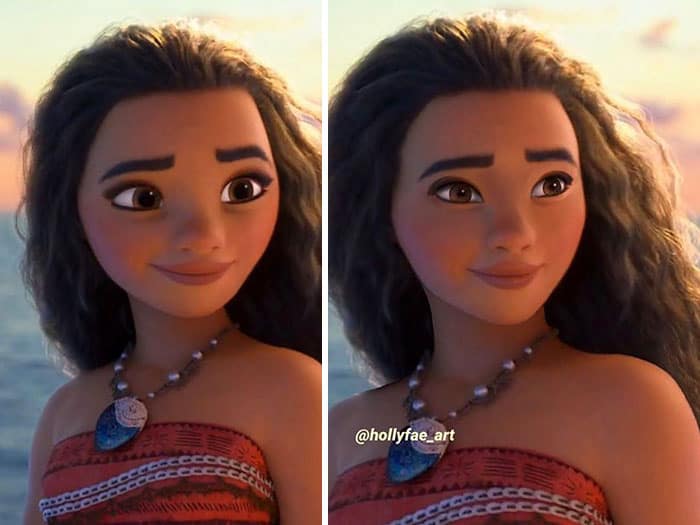 Just about every Disney princess that’s been created after Snow White and Aurora and Cinderella has had an inner fire to her that was there from the beginning and it shows in their features, their eyes, and their very posture. The ‘damsel in distress’ idea has rarely applied to a lot of them since they’ve all possessed an inner strength that comes out at just the right moment. Not all of them are fighters or even capable of it, but there’s still something about them that states without apology that they’re not going to wait around for someone to save them, which has been great. 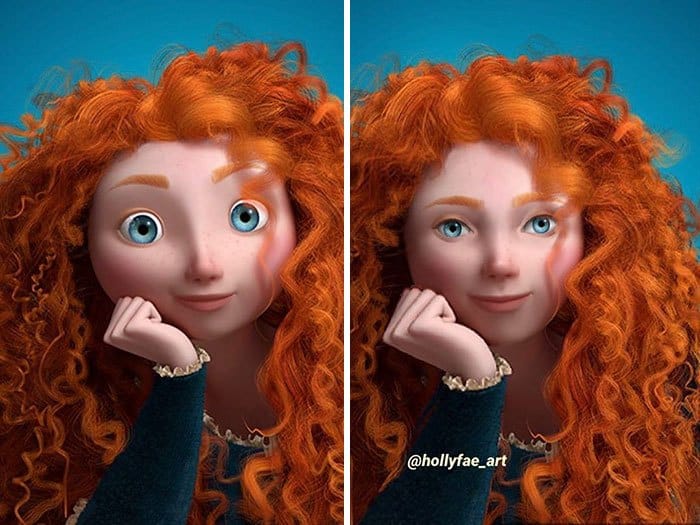 Merida actually looks a bit vapid in the right picture, but anyone that’s watched Brave knows that she’s anything but. This is one of the princesses that people know to be absolutely tough and not afraid to show it since the only person that she can’t stand up to on occasion is her mother, and that’s because she has the same fiery spirit. When it comes to anyone else though she can stand her ground pretty well, making it clear that she’s not bound to be the subservient type. 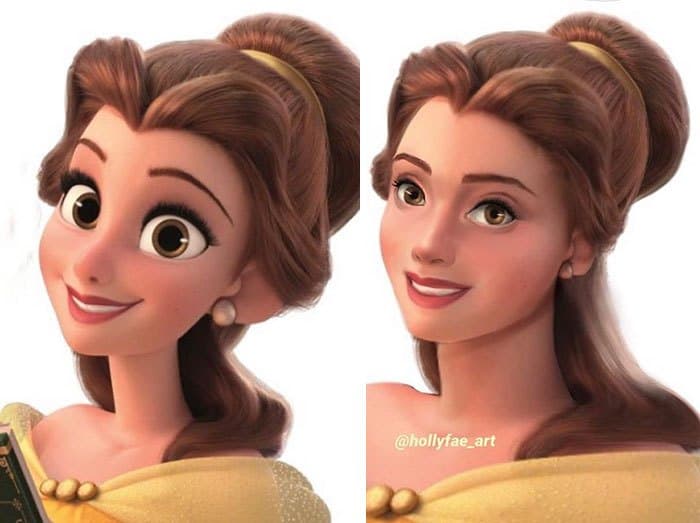 People might argue with this one, but Belle actually looks a little more snobby when she gets drawn in a realistic fashion. Maybe it’s just something around the eyes, the mouth, or the way that she definitely holds herself as someone that wants more. But as kind as she’s supposed to be, the idea that her life in the village isn’t enough for her kind of rubs some people the wrong way. Her taste in men though is a saving grace since if she went with Gaston a lot of people might have lost a lot of respect for her. 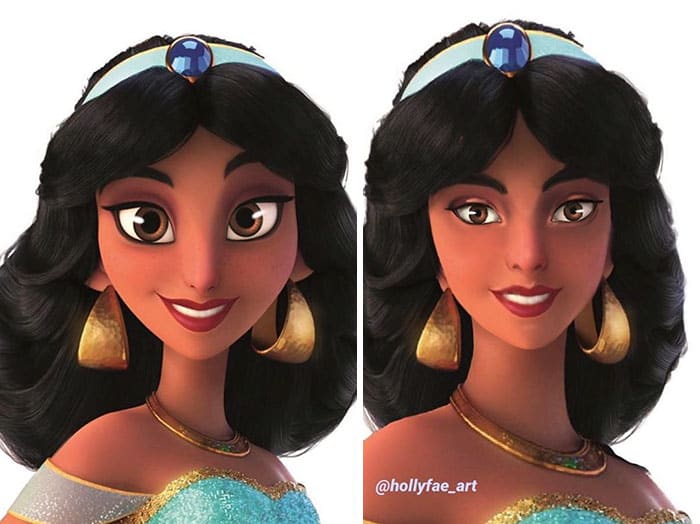 Most people that have watched Jasmine over the years have come to know that she can act the part of a princess fairly well and be as haughty as they come, but she’s also shown a great deal of kindness that is reflected in her warm brown gaze and shown by her actions on screen. Of course she’s a fictional character, but the way that people draw her at times makes it clear that she was always meant to be a kind-hearted individual. 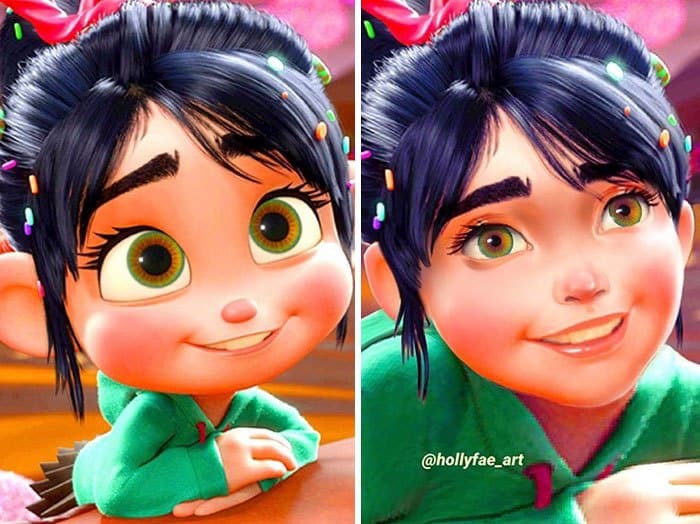 Vanellope is definitely the kind of character that one would call irritatingly cute since was a highlight of the Wreck-It Ralph movies as well as a main character, and it’s a bit surprising that she hasn’t been given a little more prominence as the years have gone by.

Sometimes realism is a great and beautiful thing.