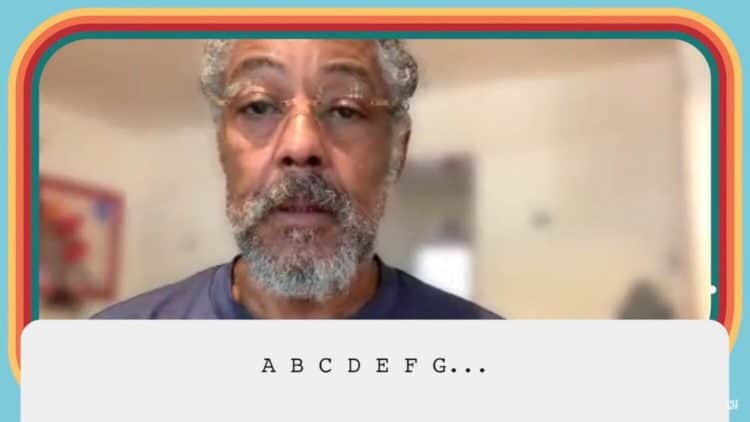 What’s funny about listening to Giancarlo Esposito reading the ABCs is that if you’re not fazed by it in the least…you might be a sociopath too, or you might just not know what’s going on. IN any case, listening to Esposito recite the ABCs in his Gus Fring voice is kind of eerie since he can deadpan just as well as anyone and his icy, cold stare is downright terrifying since it gives a person the impression that he’s going to either explode at the end of it or something bad is about to happen at any given moment. The reactions of those watching him in the clip feel a little over the top, but it’s just more to the point that some folks are creeped out a little easier than others perhaps, even if Esposito is capable of making some people nervous with his very convincing style and can make just about anything sound scary. The character of Gus Fring was, after all, one of the most disturbing characters on Breaking Bad, and he rocked that for as long as he could. Hearing him do the same for something as simple as the ABCs though is evidence that he’s had a lot of time to cultivate this voice and it’s something that he could use in future endeavors if he so desires. It’s not going to happen in The Mandalorian obviously since Moff Gideon is a very different character than Gus Fring, but the fact that he can use it when he needs to is enough to think that we’ll probably see it again.

Some folks might still be confused as to what separates a sociopath from a psychopath, and it’s a very easy distinction to make even if it’s not quite as easy to tell in real life. A sociopath has a conscience, no matter that it’s probably weaker than the average, law-abiding individual. A psychopath has no conscience, but a lot of them can fake it fairly well since being able to blend into society is a part of what makes a psychopath so dangerous. But a sociopath is just as dangerous since they do have a conscience and might decide to use it now and again for their own purposes, but it’s more of a tool, since it’s that weak and often doesn’t interfere if they decide to do something that goes against that conscience. It’s there when they want to use it for the most part. One thing that sociopaths and psychopaths have in common though is that they lack any type of empathy that other people might have. Some might want to argue this point and state that such individuals can fake anything they need to, and that’s true since being a social chameleon is a survival trait and it does come in handy when one needs to blend in. Gus Fring was a sociopath in a big way since he did have a conscience and he did know right from wrong, but he did what he felt was needed anyway since he was out to get his way and no one was going to stop him.

But realizing that Giancarlo can bust that voice out for pretty much anything is kind of unnerving in a way, even though it might look to some folks as though he’s just bored and a bit frustrated. Hey, maybe that means some of us are sociopaths or are borderline or something along those lines. Most people would want to deny that they have that kind of capability, but it could go back to what I mentioned, that some folks have a lower threshold for this type of performance than others. To some people, Gus Fring was a very scary guy since he could look at a person and appear completely calm, and yet there was a fury deep within his gaze that spoke of violence and things that could happen if someone pushed him too far or decided to be difficult, and it wasn’t hard to think that he would resort to violence if he really had to. There are people such as this in the world that are hard to be around simply because one look in their eyes speaks of the horrible things that they might do if they’re pushed to do them. The worst part is that if they’re anything like Gus they’ll have already come up with a way to rationalize such actions and possibly explain to a person why it’s a sensible course of action.

Thankfully he did drop the act when he was done with the alphabet, but it’s easy to see that he unnerved those that were watching and that he’s good enough to pull this kind of act without much preparation. Out of the many TV villains that have ever existed, Gus Fring is by far one of the scariest.