Home
Movies
Check out “Muse:” A Sci-Fi Short About a Murderous Artist and a Self-Aware Android 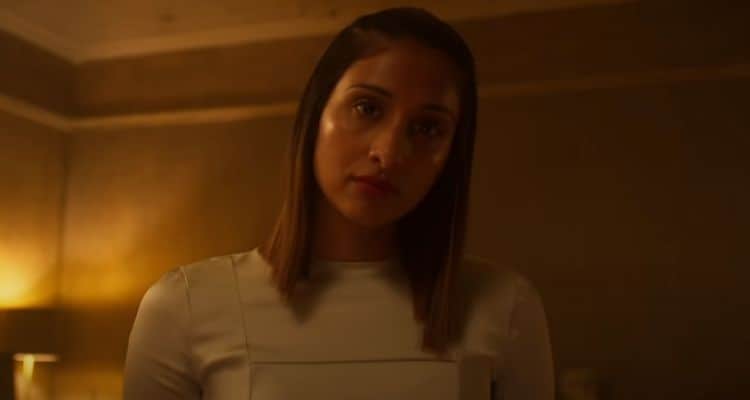 That was…interesting. Dust is definitely showcasing a lot of great ideas that might be better off staying short films if only because the idea is there, it’s out, and then it’s resolved without a lot of added filler that might get in the way and make the movie feel a little too drawn out. There’s definitely a call to take some of these ideas and see what can happen with them, but again, the idea of a short film sometimes feels easier for the audience to take even if there’s not quite as much exposition and definitely not as much meaningful dialogue in some of them. The fun thing about Muse is that it’s not really needed, in my opinion at least, since the audience can take so much from the fact that there’s a lot going on with the painting that’s on display, the fact that Aderman is obviously a desperate and possibly starving artist. Don’t let the consumption and possession of fine wine fool you, there are plenty of artists out there that would scrimp and save to purchase a good bottle of wine over a few hearty meals that might sustain them for a while. It’s not exactly the definition of ‘starving artist’, but it’s good enough for this story. But for all that his picture is provocative and definitely disturbing, there is something that’s not right about the work. That being said, hearing the woman tell him to see her in a year isn’t exactly uplifting for any artist since it says that she doesn’t trust it, or have faith in him. That’s established even further when she goes into how he showed her his work only months before and has shown such vast improvement that it’s hard to believe that it’s his genuine work. Plagiarism of any sort isn’t something an artist wants to be accused of since it can ruin their career, but it’s definitely something that can irk even the most patient of individuals.

There’s something wrong with this artist though, and that becomes obvious when he starts blocking the woman from leaving his dilapidated apartment, which has the look of a place that’s seriously in need of being condemned. Before anything can happen however the scene changes, and the female android, who is barely mentioned but definitely showcased, is praised by Aderman as his muse, though something else is kind of off as he cycles through her memories on the device strapped to his wrist and murmurs something before seeking to adjust something in her memory banks if that’s accurate enough. Eventually it’s seen that the canvas on the easel at that point appears to sport the likeness of the woman that was in the apartment in the previous scene, but despite any implication of violence, there’s nothing to be seen within the apartment or the studio. When a pair of police officers demand to see Aderman however the android lets them in before telling them, as she’s been instructed, that he’s indisposed. Most viewers should of the mind that something is seriously wrong at this point since Aderman is acting extremely squirrely, and the android, who is having her memory scanned by one of the cops, is completely calm. Once the cops verify that the missing woman they’re looking for has been in the apartment they draw their guns on Aderman, who informs the android that his life is being threatened.

The next thing we see is daylight coming through the window, and Aderman back at work, though it’s not long before things turn a bit sour. As the android’s memory begins to glitch and return she remembers the details of the disappearance of the first woman and the police, and when Aderman attempts to reset her memory, AGAIN, the whole plot comes to bear, and one can’t help but think that Aderman has it coming as the android stalks closer. While the ending is interesting, especially given that it points to the android as the true artist and the reason why Aderman’s ‘skill’ increased over such a short amount of time, it’s still creepy as hell, too. If anything, it might start to make a person wonder who the inspiration for the first picture that is seen in the short film, and if Aderman was even an artist, to begin with, or if he was a bit of a usurper that was trying to get rich quickly and forgot that true talent takes time to cultivate. As for the android, it’s amusing that her internal systems would glitch so readily, though it’s also likely that Aderman had no more of an idea of what he was trying to do with her than he did when trying to convince other people that he was an artist. That’s one theory at least,  but it’s bound to happen that there would be others.