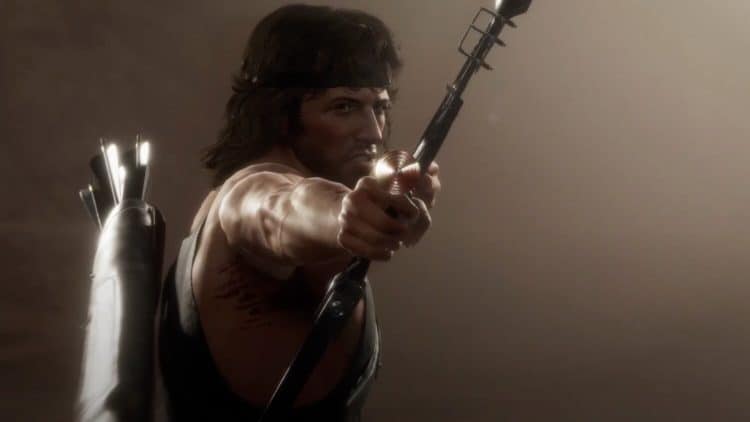 If you didn’t think that Rambo would be added to the list of Mortal Kombat characters eventually then you really haven’t been paying attention to the game for a while since the Terminator has made it on, Leatherface has made it, Freddy Krueger, Jason Voorhees, the xenomorph from Alien, and Predator have made it into the game. It was all just a matter of time really since the franchise has been adding characters now for a while and it’s fair to say that Rambo probably won’t be the last. But the style of play that the character has been given is kind of unorthodox but insanely effective since from the traps, the knives, and the firearms to the manner in which Rambo is programmed to move, there’s really nothing that a player can’t like about this since it’s definitely all Rambo and all as brutal as it can get without going beyond his character. The traps are a nice touch, as is the fact that there’s a move that might remind anyone that’s actually read First Blood, the book that inspired the movie since one of Rambo’s attacks sees him gutting his opponent before continuing to cut them apart. If anyone has read the book they’ll know that Rambo killed one of the cops before ever leaving the station as he gutted him with a straight razor.

Seeing as how Mortal Kombat has been around for so long it’s not hard at all to figure that the game is going to feature some of the most violent characters from pop culture from time to time since it’s pulled in some of the most popular in recent times. Given the level of carnage that takes place within the game, Rambo is perfect since despite the fact that the initial movie didn’t really show a lot of blood and guts, things have gotten a lot more violent in recent years since the return of Rambo to the big screen came with buckets of blood and the kind of action that leaves body parts flinging every which way. The most recent Rambo movie saw the titular character navigating a series of underground tunnels that were located beneath his farm as he slowly but surely outwitted a group of heavily-armed assailants that had come looking for him after an altercation that ended in the death of one of their top bosses. Of course, as you can imagine, Rambo’s expertise in traps and in hand to hand combat gave him a pretty distinct advantage that he made good use of.

It still feels as though he’d be insanely outmatched when it comes to competing in a Mortal Kombat tournament, or even stepping up to one of the regulars that have powers the likes of which he’s never had to work against. But the trick of Mortal Kombat is that anyone can stand a chance so long as they’re a fan favorite since, by all rights, Leatherface should be one of the biggest whipping boys on the roster considering that while he’s scary and psychotic he doesn’t have a lot of fighting experience and he’s not nearly as strong as a lot of characters in the game. As a gimmick, he’s kind of a joke since Rambo could take him out easily, but someone felt the need to put him in so oh well. Rambo at least has a shot since he has the fighting expertise and the weaponry to make himself a lot more deadly and capable of standing up to several of the characters in the game that don’t have insane and outlandish moves and power that they can use. Rambo vs. Sonya would be a good match it feels like, at least from a theoretical standpoint since they’re both highly trained and they both have an impressive array of weaponry. Plus, they both know how to kill people with brutal efficiency and aren’t overly fond of wasting time while doing it.

Unlike a lot of the characters, he’s not bound to have that many fancy moves, but what he lacks in style, Rambo makes up in sheer brutality. Learning his moves and his fatalities would no doubt be high on the list for many gamers that love playing Mortal Kombat since it looks as though he could be a very effective character. As far as being realistic, one has to remember that this is Mortal Kombat, where things like realism don’t matter as much so long as the character can do massive damage and look cool while doing it. That’s kind of been one of the driving points of the game since it first came out, as many people should be able to remember that the fact that the game used live actors to make the characters was a huge selling point that many people appreciated.