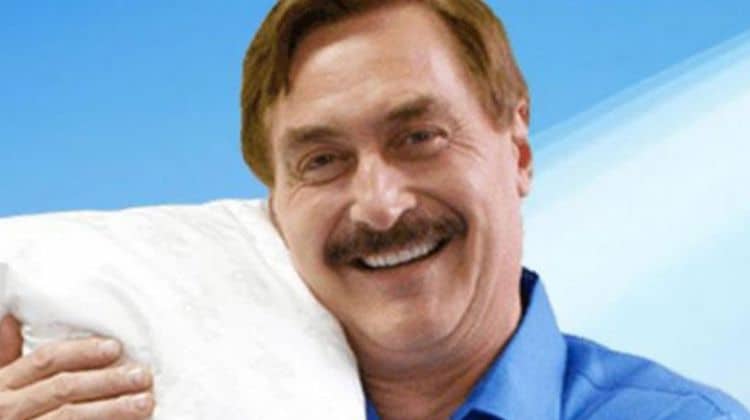 This is the kind of commercial that you’d want CinemaSins to step in for just because they happen to do such a great job with roasting pretty much anyone that comes within their line of sight. But this ad with Mike Lindell, ay-yi-yi. If you don’t find it creepy as all hell then you might not have watched it, or have a seriously high tolerance for all things creepy and strange since breaking it down is pretty easy. Laura Collins of the Daily Mail has something to say about Lindell as well. First, opening your medicine cabinet to find a person on the other side of it in their own special little room that mirrors yours isn’t what a lot of people would think of as normal, and to be fair, not being surprised about it might be easy to explain in a dream, but not in real life. Then, to have that same unknown person come into your home and recommend a new pillow, and push it down on either side of your head to demonstrate just how a PILLOW works, would only add to the creep factor since if you need instructions for a pillow then you’ve got a lot bigger problems than trying to get a good night’s rest. Oh yes, the creepiness continues, since the commercial goes on as well.

There are plenty of folks that would likely stand up and defend Mike Lindell and state that the commercial isn’t creepier than any other on the television since there have been plenty of other disturbing commercials out there, but in an era where strangers are usually viewed with suspicion instead of a welcome smile when they’re found in your home, this one is definitely able to rank right up there as one of the more disturbing examples. Something about the idea of needing a commercial for a pillow just doesn’t settle right and it hasn’t for a long time for one reason or another. Maybe it’s because a pillow is one of the simplest things in the world when it comes to personal relaxation, or maybe it’s just the way that Lindell goes about it. Again, a lot of people would come to his defense to say ‘back off’ but my words to them are ‘relax, take a pill’, because it’s all in good fun, and because the commercial is pretty creepy no matter what a person wants to say. Those that don’t find it that way, great, move on, go about your business. But trying to peddle a product by just appearing in someone’s home is kind of an odd way to go about it, kind of like those old Burger King commercials where the ‘king’ would just show up and it was supposed to be okay. AJ Caulfield of Looper has more to say on this topic.

One has to wonder just what’s going on in the mind of the writer, or writers, that are coming up with the commercial plot, or if the peddler of said goods is coming up with the idea. It goes either way depending on the budget of those making the commercials, since none of them are all that cheap. The cost of even a short commercial can be insanely high and those that run for longer are bound to be made by those that have the capital to make it happen, meaning that their finances are in good enough shape to make it happen. In the case of My Pillow one has to wonder just how many people have been taken in by this product to have made it into such a huge and expanding business. Does anyone else wonder about this? There are so many stores that sell pillows, and a lot of them have enough options to make just about anyone happy. So why in the world do we need another pillow that’s been specially made by creepy, grinning individuals that likely don’t smile until the end of their shift, unless the camera is on and their job is on the line. Oh I know it sounds cynical, but if you’ve ever worked a production line then you’ll know very well that smiling and having a good time at work lasts for a very short time unless your tolerance for said jobs is extraordinarily high.

There’s a reason why this commercial is creepy, more than one in fact, and it has to do with the fact that it really doesn’t feel as genuine as it should. The fact that we don’t really need another specialized pillow that might cost an arm and a leg is part of it, the idea of opening your medicine cabinet to see someone on the other side is another part, and yes, the factory workers that are smiling and completely happy is perhaps the last straw since very few people are ever smiling that happily as they go about their job, doing the same actions over and over until quitting time. Mike Mullen of City Pages has one more thing you might want to read about Lindell.