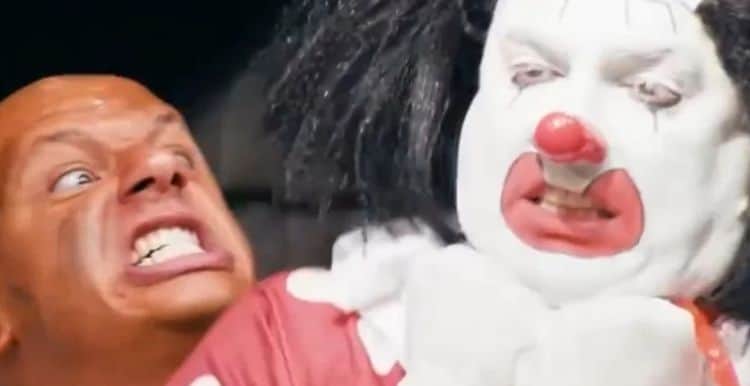 It’s become a bit trickier to say anything about comedy since so much of it has gone fringe and so much is still within what people might want to call the ‘normal boundaries’, but the Eric Andre Show doesn’t appear to follow any such guidelines since fringe is where he chooses to reside more often than not. This is the chaotic kind of comedy that a lot of people enjoy for their own reasons and it looks like something that those from older generations might be a bit shocked by since it doesn’t appear to conform to many rules, other than those that might be imposed by a very loose-minded censor, but can make people laugh thank to shock value. That’s what passes for comedy in some circles these days, but then again, that same line has been fed to a lot of people over the years as things have continued to change and people have continually wanted more from performers. Some are a bit turned off by this but others eat it up without fail since Eric gives them what they’re craving, or didn’t know they were craving, and dishes it out what the kind of fervor that is bound to get attention and in some cases is bound to get the kind of support that keeps his show going.

To say it’s out of control is fair, but to say that there’s a method to the madness is equally fair since otherwise, it would be a show about a guy that gets to say and do what he wants without any limits whatsoever. It kind of feels that way already, doesn’t it? But one way or another, Eric Andre is still able to make people laugh since comedy is something that’s different for each person. What doesn’t make one person laugh will likely have the next person in stitches since the whole idea is that everyone has a different sense of humor. Trying to see the sense of humor in Eric’s show isn’t too hard, but there are moments when a lot of people might see it and decide not to participate in it. It is something that does kind of assault the senses and makes it clear that it’s not going to be the kind of show that a lot of people are used to and it’s definitely not the type of show that will bring back thoughts of Letterman and Carson and Jay Leno. Nope, this is the type of show that doesn’t bother to tell you to buckle up and get ready, it’s going to shift into overdrive and yell at you to hold on. Okay, maybe that’s a bit of an exaggeration, but not by much. Eric’s style of comedy is definitely something that appeals to some folks and is less than effective with others though.

Being fair here, it’s not absolutely nuts the entire way through since there is some talking and a chance that others can get something out of it that won’t make them feel that they’re being forced to watch something that’s headed off into crazy town without a return ticket. But again, it’s all a matter of perspective and what people want to watch, and of course what they’re willing to tolerate since it is something beyond the norm of many talk shows. The average talk show has, over the years, become something that is just barely recognizable as the archetype that was created so long ago as hosts have continually pushed the limits and gone the extra mile and performed whatever other cliches a person can think of to keep people entertained. From live music to cohosts to games to anything and everything that can be imagined, talk show hosts have done it. Eric Andre has definitely followed suit, but he’s also gone off the beaten path a bit with his own material and fans tend to love him for it since this is the type of humor that gets noticed these days and it’s the type of comedy that stands out front without shame and demands attention. Times have definitely changed, and there’s no doubt that people are embracing them.

Putting things simply, comedy is going to change along with everything else, and it’s going to do so in ways that, like everything else, might not be as agreeable to some people and might even appear to be so far out of the lines as to be obscene. But as with all things, there’s a way to look at it and simply accept that it’s going to happen without the need to say that it’s good or bad. People are going to like what they want to like and that’s that, and if they happen to like comedy that pushes the boundaries of good taste, then so be it. There’s still an OFF button on the remote after all.