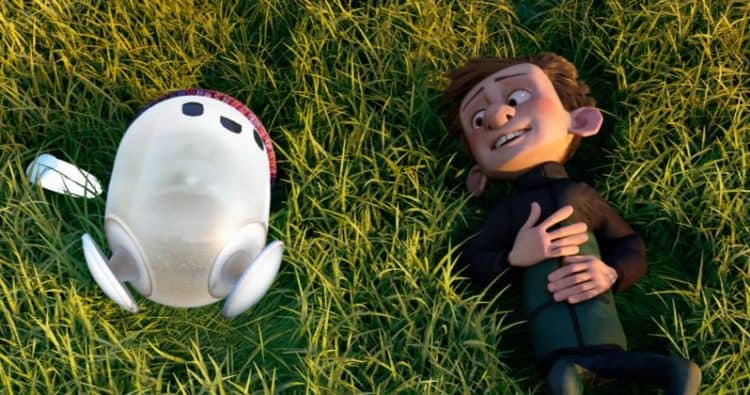 Is anyone else thinking that Baymax from Big Hero 6 just became downsized and was subjected to the average abuse that a lot of packages get when they’re shipped from place to place? Well, if not then oh well, but that’s what B-Bot reminds me of anyway since it’s a bit obvious that the little bot is a bit defective but is worth giving a chance. For a kid like Barney, it’s easy to grasp that making friends isn’t that easy and that the B-Bot is something that would enable him to be like the other kids and possibly make it known that he’s not that different and can be a decent guy. But having a robot that’s a little off and doesn’t really function as the others of his kind do might indicate that Barney is, well, kind of defective as well. It could be that his father had to buy a cheaper model or one that had been banged around a bit and therefore had the price lowered, but the main point is that this kid is looking for friends and the sad part about society is that kids do tend to judge each other sometimes based on what kind of things their peers have access to.

Just think back to your childhood for a moment and remember whether or not there was a clear line between the kids that had everything wanted and the kids that didn’t. It was easy to envy the kids that always had the top of the line clothing, toys, and various other items that they wanted but didn’t particularly need. Some of us might not have care, others might have fashioned their lives around being one of those that was the envy of their peers. But the point here is that trying to fit in by doing what others do and finding the means to have what others have is a part of conforming to society that many people see as normal, and it’s a little saddening at times as it indicates that people can’t always find a way to be happy with what they have. Hey, I’d love to have two or three vacation homes and all the time in the world to go traveling, but that’s not the life I ended up with. We make do with what we have even while trying to get what we want, which is hopefully a lesson that will be delivered in one way or another in this movie.

Technology is great in a lot of ways since it’s given us a great number of options to use when it comes to entertaining our kids and keeping them happy, and to be honest, technology isn’t the main problem when it comes to how kids are perceived and how they grow as human beings. What is an issue is the fact that quite often kids feel the pressure of wanting to keep up with their peers and experience life in the same way that others do. In this particular movie, it’s kind of obvious that having a B-Bot is one of the best ways to conform to the group and be seen as a person that belongs with this cohort. Does anyone remember the number of different trends that were popular in the 90s? It’s kind of like that since having something, or wearing something, that identifies a person with a certain group is still a popular trend that hasn’t gone away entirely.

To be fair the movie does look like something that will be a lot of fun to watch and one that will teach a few lessons along the way which is always a positive note since without that part included it becomes pure entertainment with no real point to it other than to tweak people’s emotions without any real payoff. Like it or not, but a lot of movies since the dawn of modern cinema have been made with a very strong point that’s meant to get people thinking in a certain way. There have been plenty of movies that haven’t bothered to do this and have simply been there for entertainment and nothing else. While this is just as important it’s necessary for some movies, especially those that are targeting kids, to have some kind of moral conundrum that has to be figured out before the credits roll, since this gives the movie its overall structure and makes it worth showing to kids, who need that experience and the message it brings at times to realize that while life is about many things, there are some things that require more attention than others.

Caring for one’s own personal well-being is one of those lessons after all, and being happy with who you are and what you have is another that a lot of movies have taken on over the years. But there’s a good deal of fun in also pushing the idea that while you can be satisfied with who you are, sometimes it’s a little more fun if you’re able to find like-minded individuals who are willing to accept you, quirks, and all.