Home
Movies
Check Out The “Ghostbusters: Afterlife” Behind the Scenes Featurette 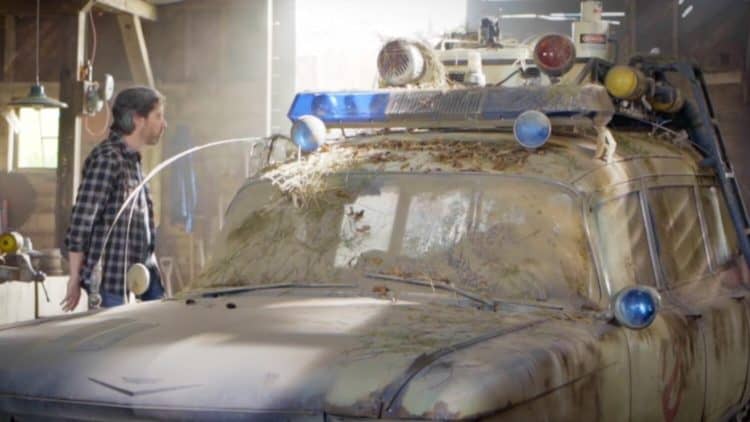 It’s very easy to imagine that Jason Reitman’s time directing Ghostbusters: Afterlife, wasn’t as simple as it might sound since not only is he taking on a legacy that’s been around since he was a kid, he’s taking over from the director that taught him quite a bit AND made the Ghostbusters great in the first place, his father, Ivan Reitman. There’s no pressure there, nope, none, not at all. Yeah, and if you believe that then you might be the type that thinks that the 2016 Ghostbusters movie was phenomenal too. The fact is that Ivan is producing the movie and Jason is directing it, so the two were going to be in the same vicinity more often than not, especially since Ivan, proud as he is of his son, was bound to want to see this movie turn into something that could be viewed as a worthy addition to the franchise. It’s been so long since a Ghostbusters movie really inspired anyone that Afterlife is currently resting as the one great hope that will bring the franchise back into focus.

The ‘passing of the proton pack’ as Jason put it is pretty much just that since the old farmhouse that is seen in the trailer and the small family that moves in are undoubtedly related to Egon Spengler, aka Harold Ramis, who passed away a while back. With the notion that the original actors, most of them at least, are returning to the scene, along with a few new faces such as Paul Rudd, Finn Wolfhard, and Grace McKenna, it already sounds as though this movie is going to benefit from a few very noteworthy actors. Granted, the 2016 movie had plenty of talent on its roster as well, but what it didn’t have was any real connection to the original Ghostbusters apart from what it took and repurposed. While the remake had its moments that were effective for a few minutes here and there, it wasn’t much to look at since it felt like a poor attempt to gender-swap the Ghostbusters without really doing the name any justice.

Afterlife does have a few hurdles to clear, such as the massive time gap between the Ghostbusters’ last outing to the present moment when they appear to be disbanded and their services no longer needed. That’s one very big downfall when it comes to ghosts it would appear, the moment that most of them are caught, the others might just go into hiding and lay low.  But it would appear that a surge is coming and the world is going to need the Ghostbusters again, but they’re likely going to need some help since by now they’re all old men that might not be able to do as much. Kind of like Indiana Jones and any other franchise character that’s been around since the 80s, the main characters are bound to be in need of some assistance, and wouldn’t you know it, young recruits with little to no real knowledge of what they’ve found are on hand.

It sounds like Sigourney Weaver and Annie Potts are coming back as well, but Rick Moranis has declined to come back for his own reasons. He’s made it clear that he didn’t want to take part in the movie which is too bad since his character was actually a good addition to the story. But oh well, that’s how things go. The hope is that this movie will make a few explanations as to why a couple of characters aren’t there if only to make certain that they’re not forgotten. But it does feel as though Jason Reitman knows very well the legacy he’s been trusted with and the pride that his father feels in watching him take on this movie and try to do something with it that will amaze the fans.

When it comes to keeping the fans of the Ghostbuster franchise happy it’s very easy to think that there are going to be people who are looking for every little slip and mistake that could possibly be made, which feels like a waste of time but is what some people are into. But when it comes down to those that just want to see a good movie and experience the fun of the Ghostbusters once again it’s not difficult to think that Afterlife is going to be met with a lot of expectations and a great deal of hope that it will be the movie that will see the Ghostbusters either moving forward or at the very least given the kind of respect they’ve earned after so long. Bringing the Ghostbusters into the modern era is something that many people have been waiting on for a while since a lot of folks wanted to see the third movie decades ago. But hey, better late than never.