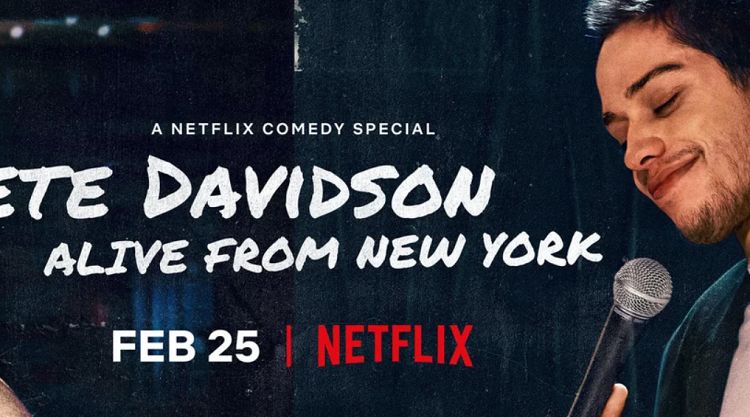 It really depends on whether you like Pete Davidson when it comes to the trailer for his new Netflix special, Alive from New York. Comedy is a funny thing, no pun intended, when it comes to what people find amusing and what they don’t. The SNL comedian will be starring in his own special this February 25th, not too long from now, as Danielle Turchiano from Variety reminds us, and at this point it would appear that a lot of people are willing to tune in to see what he has to say. Like many comedians Davidson is going to let loose with his own opinions on life and a number of subjects that will be amusing and hilarious to some and obviously less than appealing to others, but hey, that’s comedy. One has to remember that what makes one person laugh isn’t necessarily going to make another person do the same. Many comedians have proven this over the past couple of years since a number of those that come on stage to entertain the audience with their own brand of humor have been called out and highly criticized for some of the content that they’ve decided to bring to the audience’s attention. And yet it doesn’t appear to be quite as equal when it comes to the type of content that is talked about at times.

In a strange way Pete Davidson and Amy Schumer have a lot in common when it comes to their comedy, and it’s not their delivery or their jokes, though with Schumer it could be since she’s been known to ‘borrow’ a joke or two and try to reword it or pass it off as her own. But instead it’s the fact that they tend to get away with a little more in their act without getting called out as much for the subjects they’re talking about, or that their sets aren’t always that funny even when they happen to think they are. So far from the trailer it would sound as though Pete is going to be giving his customary delivery when he spews one joke after another, and for those that like him it’s bound to be something special since stand-up comedy is quite a bit different from anything seen on SNL, as many would say is painfully obvious. In stand-up it definitely feels more personal as it’s the comedian and the audience, not a troupe of comedians that are trying to either feed off of one another to keep the energy flowing or are actively trying to outdo or even playfully trip each other up. Ever notice on various episodes of SNL throughout the years that some comedians are actively trying to see how much they can rattle their peers? That’s a big part of what makes various comedy shows so great, the actors/comedians are trying to entertain each other as much as they’re entertaining the audience at times, and it helps to make an even better show.

But in a stand-up routine the comedian is out to entertain the audience all alone and as a result they have to be a little more on their game and have to fall back on a delivery system that may or may not work for them. For Davidson, who is very much into dark humor that he delivers in a manner that makes people wonder about him at times, the delivery he’s best at is the kind of energetic and slightly manic method that has worked well for him thus far. Some might attribute this to the mental stress he’s been under throughout the years, which would be understandable, but there’s definitely a bit of mania within Davidson’s character that he’s made work for him in the recent past and is still keeping at the ready whenever he sets foot on stage. For those that don’t or can’t see it, or don’t believe it, finding him amusing and hilarious is likely enough, as digging any deeper into his person might be a little too revealing and could possibly ruin the comedy for those that don’t want to see the darker side of those that engage in comedy for living. Like it or not comedy does come from a very dark place, which is why the jokes that are unleashed on the audience from time to time appear to be a bit savage and relentless in their delivery. But as I mentioned, Pete tends to get away with them a little more often than others, and while there are reasons for this I’ll just say that it could still backfire on him, though one can certainly hope not. The mere mention of gay jokes is enough to raise a few hackles, but we’ll have to wait and see just what kind of reaction will be coming once the special is released. Reiss Smith of Pink News already has an answer to this if you want to see.