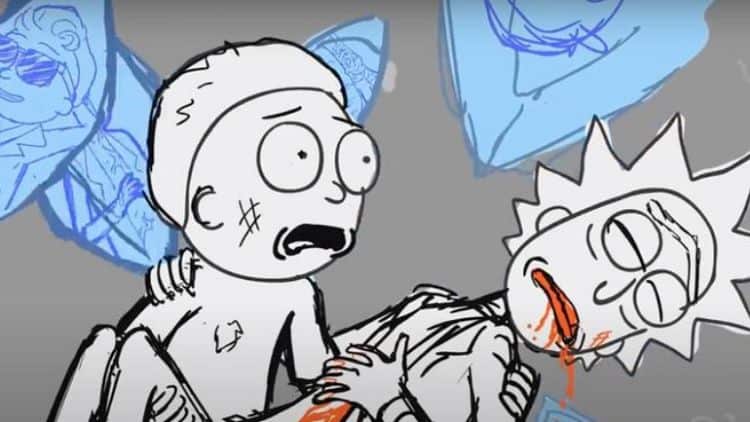 If you happen to find Rick and Morty hilarious by now it means you’ve been successfully converted and are likely ready to admit that it’s one of the funniest shows ever made. If not then you’re still on the fence like me and are wondering just what people see in this show, while at the same time are able to admit that it’s lasted this long for a reason. At the very least people that have followed this show for four seasons now have made a commitment to something that has been out there and bizarre in a way that, admittedly, calls to those of us that embrace the crazy quite often, but is still just a little more over the line than some folks are willing to go. In this first look of season 5, it’s evident that things aren’t exactly the way they should be, which means that they’re EXACTLY the way they should be when it comes to Rick and Morty. Did everybody get that? What we see is Morty carrying Rick while they try to escape a creature that’s bent on tearing them apart and as they make their way into their ship and head back to earth Morty has a thought to call the girl of his dreams and give a last, touching goodbye that ends up being a hello and a reason to live since obviously Morty isn’t that great at expressing his feelings and he’s really not great at all when it comes to gauging the moment. But then once the ship crash lands into the ocean things only get a little worse as Rick’s nemesis Nimbus shows up and declares that he’s broken the truce. Yeah, business as usual with Rick and Morty for the most part.

While a lot of fans are hoping that Rick and Morty will make a return here eventually, which they will don’t kid yourself, an idea on the table appears to be the consideration of releasing just one episode per month instead of sticking to the usual schedule. What do you think? Would fans accept this, or are the creators hoping for something that might backfire on them? It’s already been established just how nuts some of the fans really are since the whole issue of ‘Mulan sauce’ at McDonald’s was established a while ago, and it’s not hard to think that something that upsets their precious balance might tip a lot of fans over the edge again. But the idea of only releasing one episode per month does make it sound as though Rick and Morty would be considered a big deal and would be granted a little more reverence by even the most diehard fans since that one episode would be something to look forward to each month. In a way that sounds kind sad to even contemplate since some fans’ month would be revolving around that one pivotal episode that they wanted to see, but at the same time it could be an idea that might hold weight simply because it wouldn’t be over so quickly and fans wouldn’t have to pine over missing one of their favorite shows for months on end. It’s a gamble either way really.

Currently, it also sounds as though the episodes are being compiled and completed using Zoom meetings, which is bound to be a challenge since getting everything done online is a lot easier than trying to sort out just how to stay safe and get the work done in person, but it’s also a challenge since one has to keep sending material back and forth to get it checked, get it approved, make sure everything’s right and the way it should be, and yadda yadda yadda. There’s no doubt that there are plenty of challenges ahead of the Rick and Morty crew when it comes to getting their work done and getting the episodes out as they want, but fans should be able to relax and realize that the episodes are being worked on and it’s likely that they’ll be coming much sooner than people are thinking since season 5 has been in production since before season 4 was even done. That is a big reason though why season 5, which was hopefully going to be out by April, hasn’t aired yet, but the crew is working as hard as they can in order to push it forward, and so far things appear to be moving forward at least, which is a plus. But as far as the story goes in season 5 the first look is already making it clear that the craziness is going to take yet another turn as Rick and Morty continue to find ways to entertain the fans and somehow survive situations that even the hardiest and most durable of cartoons might find daunting. Oh yes, let the craziness continue.