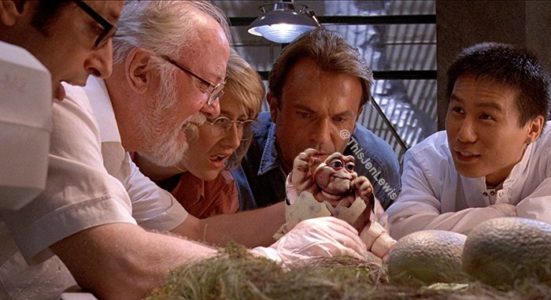 It’s easy to see how some people would see this as cringe-worthy and how others would get a kick out of it since it is pretty well done and faithful to the movie in every way. Taking some of the best scenes was a big up for it too since there are a lot of moments in Jurassic Park that are great, but some of them are a little more entertaining than others. But if a group of aspiring directors and actors want to get together and come up with a low-budget way to recreate one of their favorite movies, this is definitely the way to go. Speaking frankly it’s kind of impressive to see the ingenuity of the project since just putting the dinosaurs together and getting them to move in even the simplest way had to be a bit of work on its own. Anyone turning their nose up at this might as well move on since the whole point of the production was kind of lost on them, as despite being so low budget this group made a very impressive rendering of a fan favorite that’s easy to laugh with, and at in a good-natured way since they nailed it in a way that a lot of people can possibly find at least a little impressive. When you don’t have much of a budget and still have a good imagination and clear vision there’s a lot that can be done obviously, as this video proves.

There are definitely some scenes that might not have been quite as possible or even feasible, such as ‘Timmy’ being shocked by the fence, as such a thing might have been difficult to recreate without things getting a bit too dangerous. Also, having the dinosaurs clash at the end might have been kind of difficult since the cardboard constructs might have literally torn each other apart. Does anyone else feel like the John Hammond character ended up looking like a school project Santa on safari? It was still well done, enough so that people could easily get the point and even follow the story if they for one reason or other haven’t seen the movie. That’s kind of hard to believe, isn’t it? Jurassic Park became such a huge phenomenon throughout the world that imagining that anyone hadn’t seen it is kind of difficult, but there are likely people out there that haven’t seen it yet. What’s great about this video though is that even if a person hasn’t seen the movie it’s easy to follow since they took some of the most pertinent moments in the movie and included them. It’s funny isn’t it? The extra parts of any story tend to fill out the movie, make it a little more complete, and satisfy a lot more questions than the quick and truncated forms that might be possible. Of course the story’s ability to expand and absorb as much into it as possible is something that a lot of people enjoy. Short, sweet, and to the point though can go a long way towards satisfying the needs of those that don’t want to sit through two hours or more of action and drama.

Jurassic Park has obviously taken an idea and run with it in a manner that people were able to embrace with a fervor that’s usually reserved for idea that are considered to be highly innovative and revolutionary in a way. Bringing dinosaurs back to life would definitely count, but as the movies show it’s likely that things would go horribly wrong as well if anything in the movie ever became remotely possible. As Jurassic World: Dominion is about to show and as Jurassic Park: The Lost World already showed, the inclusion of dinosaurs into the world at this point would be a very, VERY bad idea since humans and dinosaurs never met throughout history according to all known records, which means that two species that consider themselves the dominant species on this world would likely quarrel incessantly in our own way in order to prove that dominance isn’t all about size or intelligence. Of course, given that the dinosaurs in Jurassic Park and Jurassic World are genetically modified creatures that aren’t entirely faithful to what roamed the earth so long ago, it’s likely that humans would be a distinct disadvantage at first since trying to predict what a creature will do when you don’t know that much about the creature is a bit difficult, and by the time one figures the creature out it might be too late.

Getting back to the matter at hand though, this attempt at entertainment is pretty impressive since gathering all the needed materials, finding the settings, and executing the movie in this manner had to be at least a little challenging. Props to the cast and crew, which are likely one and the same, this was highly amusing.