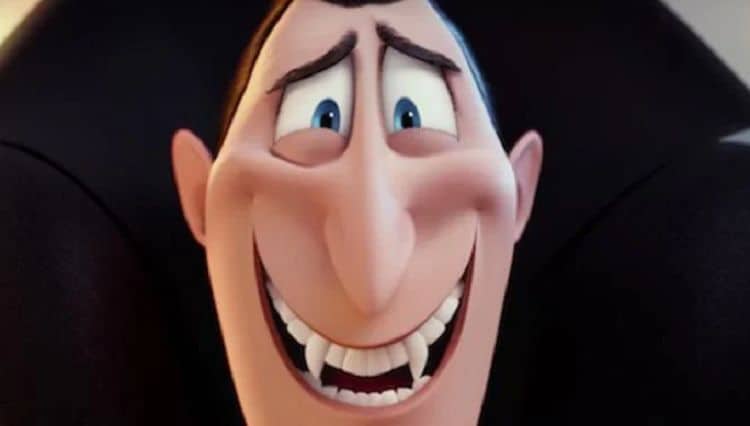 Apparently there was another lesson to be learned at Hotel Transylvania since learning to accept humans since they’d accepted monsters wasn’t enough, and apparently accepting that his daughter was married to a human and had a child wasn’t enough either. Even getting Drac hitched wasn’t the final installment. But now Dracula and the gang are back for another go as a development that’s bound to amaze everyone is about to happen when the roles are reversed and the monsters become humans and the humans become monsters. One would think that Dracula would have learned to accept Johnny for who he is but that doesn’t appear to be the case in this movie since something is eating at the lord of the manor once again and it’s kind of obvious that Johnny, in his dim-witted way, wants to get his father in law’s approval once again and as a result, he goes to Van Helsing of all people and obtains a method to turn the tables so to speak. The hilarity of what’s going to happen when humans and monsters switch places is bound to be hilarious and it’s also slated to be the last movie in the series. It’s hard to say whether this is a good or a bad thing since the Hotel Transylvania series could keep running if there are other issues to be ironed out, and it has actually been running as a series for a while now. But the movies might be over and done with after this entry, though as of now it’s hard to say if that’s going to be the final word. Monster movies of any type usually tend to experience a resurgence now and then since people happen to love the classic monsters and enjoy seeing them brought back to life again and again in different versions. But for the Hotel Transylvania crowd, it feels fortunate that they’ve lasted this long simply because the hype around them hasn’t always been as great as one might expect, but the results have usually been pretty positive.

Taking a look at the full trailer it’s kind of funny to see Drac turn into a middle-aged man with a paunch and thinning hair, but it’s going to be interesting to see how some of the other monsters are affected, and what will happen to the humans. It’s going to be a seriously big switch, and the added perspective that will be gained from it will teaching another lesson that everyone involved will learn from in a family-friendly way that hopefully the fans will enjoy. When you really think about it, the Hotel Transylvania movies have been some of the most touching movies made in the last decade or so and it’s fair to state that they’ve incorporated the major monster legends in a manner that might actually spur younger fans to learn more about the old stories as they continue to grow up. It’s a thought at least, not a foregone conclusion since many people happen to think that the classics will always be the best and that anything else is a pale copy that’s been drummed up for those that love the gore and violence.

These animated movies have taken the old legends and created something that’s both funny and kind of silly at the same time and have done so by still observing at least some of the cinematic history that people have come to love in a big way. Sure, the movies have been getting a bit campy as they’ve continued, but the whole idea of it has been to just have fun with something that is otherwise seen as too scary for kids by creating a storyline that uses the same elements but toned down so that kids can enjoy them. If one looks around the hotel they can find quite a few monster ideas, legends, and myths that have been thoroughly enjoyed over the years. Hotel Transylvania isn’t the first movie to ever use this idea, but it’s one of the more successful and it’s been around long enough now to state that it’s one of the most loved monster movies among kids. From the raunchy jokes and over the top behaviors the movies are something that can be enjoyed by everyone from kids to adults since there’s plenty of material that kids might understand and stuff that might go over their head, but the point is that there’s enough content there to satisfy an audience with each movie. The fact that this is apparently going to be the last of them is a bit sad in some ways, but it also feels as though it might be about that time. Every run has to end at some time, but if this series can go out on a big laugh then all the better.