Home
Movies
Check Out the Trailer For David Fincher’s “Mank” 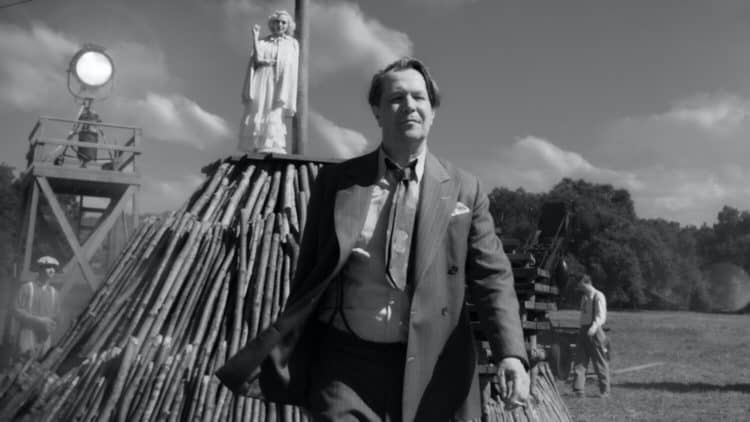 Mank feels like a curious look back in time to a moment when having a sense of humor must have been a lot harder and taking things personally was even worse than it is now. Herman J. Mankiewicz, one of the most known and notorious screenwriters of his time, did something back in his day that was a no-no by the standards of filmmaking and by the standards of being a human being. He let his talent use him to create a movie that not only ended becoming a huge controversy in life but also made it possible for one of the most powerful men in the country to pursue a vendetta against him. These days that might be as common as walking down the street to the corner store, but back then one lived and died by their reputation, particularly when it came to Hollywood. As a screenwriter, Mankiewicz was a truly talented man, but in any other part of his life, it would appear that things were going downhill quickly after he collaborated with Orson Welles to create Citizen Kane. It could be that his life was already headed in that direction since he was an alcoholic that didn’t appear to want any real, solid help, but after getting to be known by William Hearst, one of the most powerful and influential men in the country, his life didn’t exactly hit a serious upswing since Hearst believed that Citizen Kane was a story of his life, and he didn’t appreciate it much.

This looks to be one of those stories that people will look at and wonder if it’s worth it, but at the moment it feels as though it would be worth a look just to get a Hollywood perspective on the whole thing. After that, it would be wise to look up whatever can be found on the internet and in those big things made of paper that are bound together and usually have a cover with a name on the front. What are those called again? Oh yeah, books. In any case, no matter how a person goes about learning more where it concerns Mankiewicz, it’s likely that different perspectives will help people to make up their own minds as to whether he was being treated unfairly or if he was just being a flat out jerk that didn’t care about what he was doing so long as he was getting paid. It’s likely that there are a few different perspectives on the man since as history goes to show, Hollywood usually takes what is deemed to be the most cinematic and will do what they can to spice it up a bit in order to entertain people while still trying to give some authenticity to the story. So to be certain, it’s best to read other sources in order to figure out just what parts of this man’s life were real.

Apart from that, it could be interesting simply because some people are genuinely interested in the history of certain figures in cinematic history and love to delve into the various stories there are to be enjoyed. The thing about what’s real and what’s not in these types of movies is that a lot of people, most people in fact, that were alive during this time period are dead and gone, and all that’s left are the words of those that were around and were drawing upon their own experience and perspective in order to tell the tale of one person or another. Without trying to call anyone a liar or a cheat, it’s still very easy to misinterpret things that might have been said and what an individual person might have been like, especially since the individual that is being used as the subject isn’t going to be able to defend themselves from anything that people might believe. What we’re bound to learn about Mank is that he was in fact a very habitual drunk and yet he was also a great screenwriter that feuded with Orson Welles over who earned the credit for Citizen Kane and who also feuded with William Hearst, a man that would have been a very poor enemy for anyone to engage.

Mank might be one of the many movies that will be up for an award nomination or two simply because it looks like something that people will be able to look at and get behind, but at this point, very few awards feel like they’re worth that much since the prerequisites for awards has become kind of a joke. I won’t go on a rant about such things, but if this movie is voted as Oscar-worthy it’s very likely that it will join the slim pickings that are likely already being nominated from this year in the hopes that it will bolster the ranks a bit.