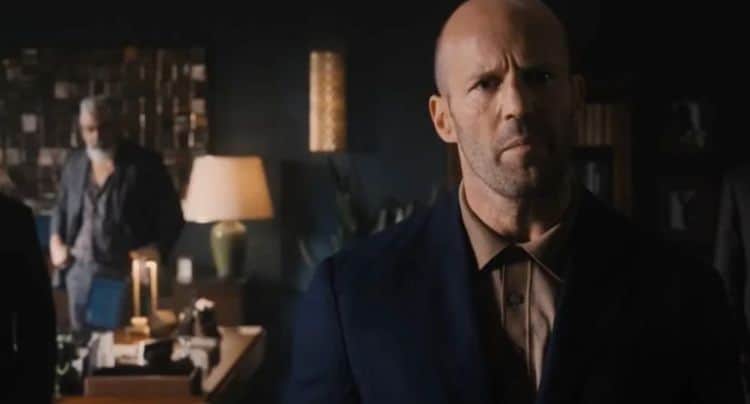 Jason Statham definitely appears to enjoy being the badass in a lot of movies, and has for quite some time since Wrath of Man is following the same kind of character that he’s been playing for a long time now, someone that has a grudge against someone else and means to exact a measure of revenge. He’s usually a guy that is out to gain revenge, redemption, or is just there to mess stuff up in the pursuit of some goal that may or may not come clear when all is said and done. In this movie he’s a little too obvious what he’s after, especially now that the trailer has opened up just a bit in order to make it clear that he’s not really a cop that is working with a few of the wrong types of people, but instead someone posing as a cop that is already the type of person that no one would want to cross. When his son is killed in a hit on an armored car, H goes off like a Roman candle after recovering from his own wounds, seeking to avenge his son while at the same time finding that the usual channels don’t appear to be working. When he becomes a guard for an armored car service, thinking that it had to be an inside job, things get really interesting as he starts showing just how skilled he really is when it comes to fighting bad guys. The downside though, for the people he’s working with, is that he’s not there to make friends or work towards a pension plan, he’s seeking out the person that killed his son, which means he’s not going to stop until he finds who it was.

He’ll go undercover to find who murdered his son… and there will be blood. Watch the red band trailer for #WrathOfMan, starring Jason Statham and directed by @RealGuyRitchie. Get tickets now – in theaters May 7. pic.twitter.com/iFjEw40pxc

There are those actors that might benefit from a different look in a movie that might show them in a very different light, and then there are guys like Statham that should probably just stick with being the tough guy since he’s so good at it. As it’s been established though, this isn’t the type of person he is when the cameras are off, since his wife has even gone so far as to state that when he’s not acting he’s one of the nicest guys around and isn’t even close to being like his on-screen persona. That’s not hard to believe really since some people take on a completely different look and set of behaviors when they’re attempting to portray certain characters, and Statham has been great at playing the tough guy for quite some time now. But to think that off-screen he’s more of a gentleman and doesn’t really get confrontational is kind of interesting since while he’s on-screen he appears as one of the people that folks wouldn’t want to mess with no matter how tough they think they are. In this movie alone he already appears to be someone that’s going to go to just about any end necessary t find his son’s killer and deal with them in a manner that will leave no doubt that he’s someone that shouldn’t have been provoked in such a manner. Some folks might say that anyone who watches their kid being killed in front of them might feel the same way, but there’s the average response and then there’s the movie response, which is essentially the same based on the person, but amplified to a degree that real life might not be able to touch.

Seriously, as much as real-life trumps the movies more often than not, there are times when the reactions in the movies and on TV are far stronger than anyone could possibly predict. A lot of us might say that if our kid was murdered in front of us that there would be nowhere that a person could hide that we wouldn’t find them. Some might be sensible and admit that they would need help from the authorities, but others might make it known that if anyone stood in their way that they would find the means to go through, around, or over them and find the killer before dispensing justice in a manner that the law doesn’t typically allow. The one thing that Statham obviously has in this movie that a lot of people in the real world can’t generally depend on are powerful friends that are willing to help him out, and a skill set that makes him deadlier than the average individual. The sentiment that he gives in taking on characters that are out for revenge or redemption is great, but it’s something that can’t really be matched by the average audience member. But it makes for a good story and while it’s the type of tale that’s been told, again and again, people are still down to watch it.