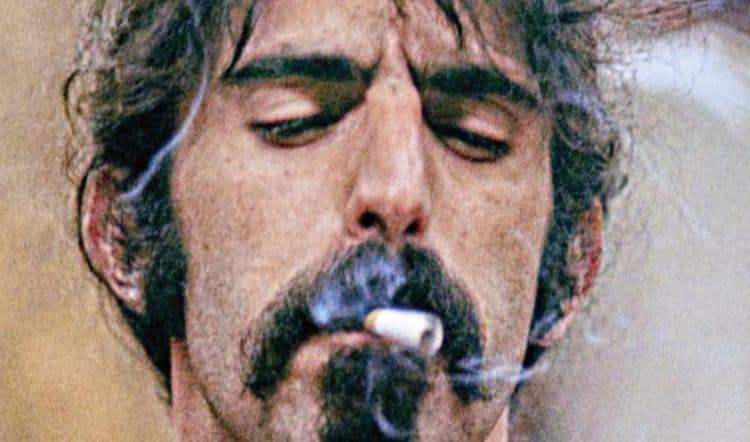 Some people just defy an easy explanation of who they are and what they do. When describing Frank Zappa it’s very easy for some people to retreat to their comfort zone and describe what he meant to them as far as his music went, or as far as his influence went, or just for anything that might be used in their own words to describe him. But the truth is that all one needs to say is “He was Frank Zappa.” With the reputation he gained during his life and career that’s about as expansive as it needed to be, and yet people continue to heap more and more words on the pile, as we’re doing here. With this new documentary on his life and what he meant to people it feels as though we might get a better look into his life than before, but at the same time, without being able to get into his head, as many people would no doubt like, it’s not entirely possible to know who this man was, since everything that came out of him was a finished thought, or as close to a finished thought, as could possibly be determined. Some would no doubt argue that of course they knew him, and those that were closest to Frank might have the greatest claim on this since they were close enough to the individual to actually see how things came about from time to time. But the truth is that with most artists or those that have great influence over others, sometimes they don’t even know what’s going on upstairs.

The ideas have to come from somewhere, right? That’s the general rule of thumb, that ideas don’t just happen and they have to be derived from something, from somewhere, and that there’s an explanation for how they form the way they do. But sometimes the ideas do just come, and even the artist can’t fully explain why they’re there or why they show up. The best sometimes just go with it and accept the idea when it comes without questioning why, while some want to know the inspiration behind what they do and say in order to quantify it. Everyone has their own method for creating, as it’s an act that is natural and yet so varied that trying to pin it down to one source is difficult and sometimes nearly impossible. Trying to figure out what Frank Zappa was all about and how he came up with his material is something that one might figure is able to be pinned down in some way, and it can be if one is willing to pin down the idea simply because they feel the need to and because their own sensibilities won’t let them rest until such a thing is done. But pinning down those ideas is something that feels wrong and unnatural at times, especially when ideas need to be free to change and evolve as they will. How else does humanity grow when it comes to imagination?

Trying to quantify Frank’s life and his contributions to the world is bound to be something that will be seen from a few different perspectives, and again, those that were closest to him will likely have a greater handle on it than anyone, but even they might continue to wonder just who Frank was and how he did the things he did. What people do know is that Frank was someone that a lot of people came to respect in a very meaningful way since he was a revolutionary in his time and someone that didn’t follow what were considered to be the rules at all times, which is an attractive path for many to follow, even though walking too far down such a trail can easily disorient and disillusion many people. Frank stated in his life that it was time for a revolution, and while this is a popular figure of speech as well as a reality for many people, what is forgotten is that sometimes the revolution, if it does happen, and it is successful, will eventually become the establishment, sometimes the same establishment that the revolution was formed for. If Frank stood for anything in this manner it was to remind people that things continue to change and to evolve as life goes on and that a true revolution is utter chaos that can grip and rend at what people perceive as the law-abiding world. And that’s just a mild taste of what can really happen during a revolution the likes of which some people call for.

Frank’s life was unique, there’s no doubt of that, but how truly different it was will hopefully be accounted for in the documentary since being different is one thing, but transcending the world that people know is something else entirely.