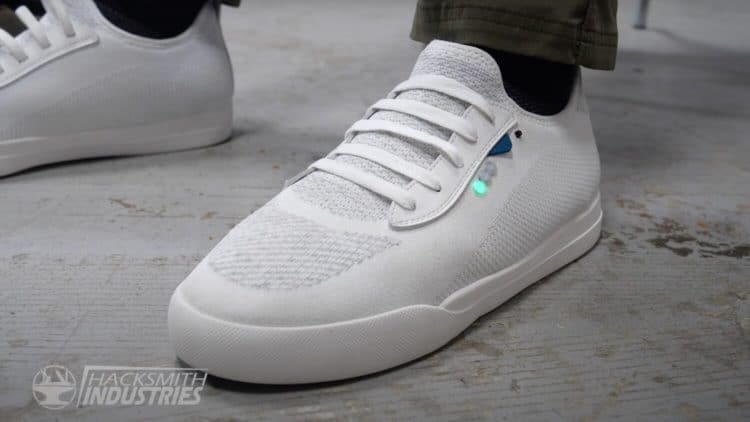 That is a LOT of effort for a shoe, especially when laces are a personal choice when it comes to footwear. The whole idea of wearing slip-on shoes is more to do with comfort, while laces aren’t bad but can be kind of tiresome. Still, it’s easy to not condemn this idea out of hand but see it as useful for those that might not be able to tie their own shoes. Still, a slip-on would probably be a better option simply because it would be a lot less work and hassle to think about. But then Hacksmith Industries might not have anything to do if they threw ideas like this out the window. The fact that they would take a pair of shoes and them the self-lacing ability is kind of interesting, but like many things that are becoming automated these days it still feels as though it would be a massive copout for a lot of people that don’t want to lace up their shoes and want something simpler that can help them gain those precious seconds of living back. Having a motor in your shoe also doesn’t sound optimal, even if the shoe in question is supposedly waterproof. Somehow, much like a few of the other things that the Hacksmith has done in the past, this feels like an idea that might need a few decades of refinement to really get down.

It’s very easy to be wowed by the stuff we were shown in Back to the Future 2 since a lot of it was insanely impressive and is the kind of stuff that we might have wished to have back in 2015. The funny thing is that the human imagination often exceeds the capability of human beings when it comes to the stark reality of what it would take to recreate some of the things that are conceived in a writing room. While it would be great to have a lot of these inventions the practical side of them would need to be explored in a big way since the application might be seen as nice to have around, but the mechanics of it do appear to still need a lot of work. Plus, what in the world would this do to the retail price of shoes? It’s likely that after a while the price might go down in the shoes were to become that popular, but at the same time, the initial costs would probably be kind of insane. People already pay an exorbitant amount for shoes as it is, but these feel as though they might be even worse when it comes to how much they might pull from a person’s wallet.

The many things we see in the movies are usually pretty impressive and something that people would love to see in real life, but the fact is that some of the items that the movies depict so readily are those that take a great deal of work to bring to life unless of course they’re being used as props and don’t have to function for more than a couple of scenes. The jacket that Marty wears in Back to the Future 2 would be nice as well, but a jacket that can auto-size and comes with an instant drying mode sounds complicated, not to mention that the technology available at the moment might not be up to snuff to make it possible. It’s amusing what people thought would be available in 2015 when compared to what was actually available back in that time. People were expecting cars to fly, hoverboards to really work, and all sorts of things to be ready and capable of catapulting us into the future. Five years after the expectation we see that people are still tying their shoes and our cars don’t fly yet, and things have only grown a little worse even as people continue to push innovation and creativity as much as possible.

On the day we actually do see these kinds of inventions being made on a regular basis it feels as though a lot of us will either be in our twilight years or might not even be around any longer, since the creation of one idea or another appears to take a long time to develop, test, send back to the drawing board, test again, and then try to market. In terms of shoes, a good pair of slip-on shoes might be preferable to spending the kind of money that one usually spends on a gaming system, a used one at that. But it’s easy enough to give props to Hacksmith since they tend to have a lot of fun with what they do, or at least it would appear that way. Perhaps one of these days we’ll see self-lacing shoes. It doesn’t feel likely that it will happen soon though.