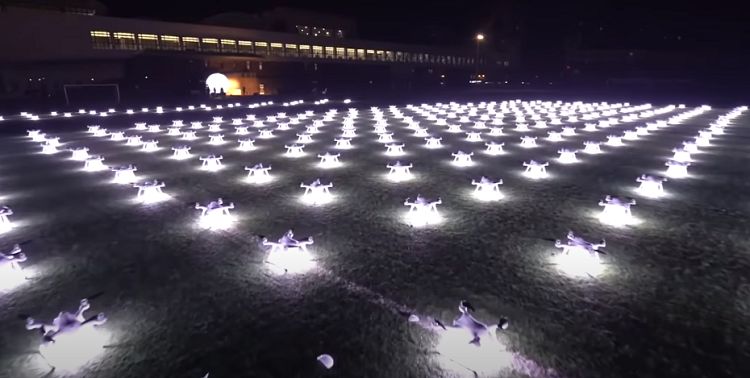 It’s easy to understand that we’re supposed to be moved by the dedication to Van Gogh, one of the most celebrated painters in the world, but this drone presentation is simply insane considering that it’s a world record and it’s so precise that one can’t help but think of much time and effort went into the programming of this display. Just imagine having to take Van Gogh’s works and somehow program them into the display in a manner that would allow each drone to know where it needs to be and when and then having to take a flight path that wouldn’t allow it to smack into any of the other drones along the way. Working with drones is either easy or exceedingly difficult depending on who a person talks to since one has to imagine that the bigger the drone gets the more capabilities it will have since there’s a great battery capacity and there’s likely more of a chance that it can hold the kind of hardware that can be programmed in this manner. Of course, I know little to nothing about drones so I could be speaking out of turn, but the whole idea of this choreographed tribute is enough to turn anyone’s head since trying to create a simple PowerPoint presentation of Van Gogh’s works is hard enough for a lot of people, but thinking of all it would take to create something like this that would eventually become a Guinness World Record is enough to short-circuit some peoples’ minds.

It’s kind of interesting to think that anyone doing this would think of Van Gogh as the subject to display, but it could be that those who were working on the project were big art enthusiasts or just had to pick a subject and this is what they went with. Regardless, just thinking of the planning that went into this is enough to make one realize that working with the drones that are used by consumers is far easier than to try and choreograph something like this. In terms of the display, it’s better than fireworks in a way, until one realizes that the video was sped up beyond belief since thinking that the drones were going to be able to coordinate with this kind of speed in real-time just isn’t possible. But when one really thinks about it, the length of time that the drones took to get through the presentation was still impressive since it was less than thirty minutes that it took to get through everything. The fact that the video is around eight minutes means that things were sped up to a degree that made it feel as though we were watching a fine bit of animation for our enjoyment.

There’s a lot to be said about the skill and precision here since a person could say that once the programs are laid in that everything should go according to plan. But if a person were to slow down and think about it, just programming everything in wouldn’t be quite enough since there are a number of things that could go wrong. This means that things have to be checked, double-checked, and still monitored to the point that there’s an entire team of people on hand should anything go wrong. It’s easy to think that they might have had more than one test flight just to make sure that things were going to work out the way they should. It’s also fair to say that the cold could have become a factor, as could have any winds that might have whipped up, but according to the video, things went the way they should have, and nothing was out of order or even slightly askew. That’s impressive to be certain, and it’s a testament to the team that made this happen since the hard work and dedication that went into this project is something that many people are capable of but only those that are really invested in something can pull off. It’s a good question to ask though as to whether this was meant to be a Van Gogh presentation that was also going for a world record, or if it was an attempt at a world record that simply selected Van Gogh as the display they wanted to present.

The use of colors was great as well since when expressing interest in an artist of any caliber it’s definitely important to add in more than just a little color, especially in the works of someone like Van Gogh, whose works are still spoken of with the highest praise. It’s a shame that his brilliance wasn’t fully realized when he was alive, but that appears to be the case with many renowned artists throughout the world, that their works are only considered noteworthy after their passing. In any case, it was a great decision for this particular display, and it was definitely well-received.