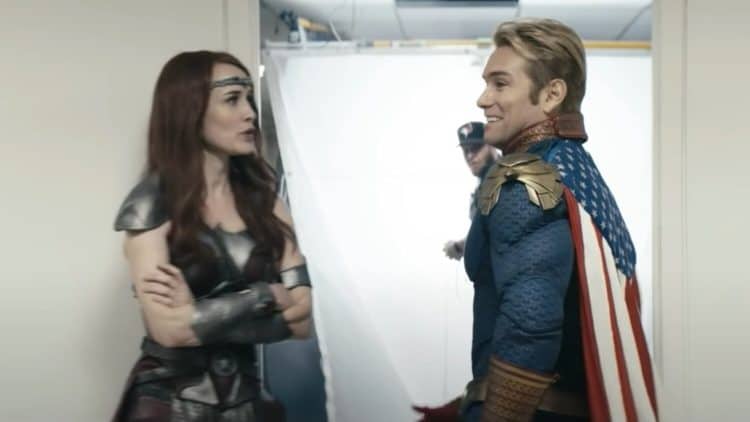 It’s all about the bloopers sometimes. The Boys, which is coming up on its second season this September, is one of the strangest superhero shows that’s ever debuted, but at the same time it’s become one of the most watched as well since it puts a different spin on superheroes that a lot of people might agree with since it doesn’t sugarcoat much of anything and makes it clear that the heroes, who are typically loved by the people and expected to be lifted up as the shining example and paragons of virtue that so many see them as, are kind of vain, cruel, and don’t really care about anything other than their image. But that doesn’t mean that they can’t have a little fun and won’t screw up from time to time. Things happen, people get tired, accidents occur, and thankfully it all gets caught on film. There are some very top-notch actors on The Boys but what’s great about any program is that eventually there’s going to be a blooper or two and if there are enough they’ll go on a reel and we’ll get to see them eventually. In fact some fans happen to love bloopers and will actively seek them out when it comes to their favorite shows or movies. When bloopers happen in movies and shows that are supposed to be mostly serious it can be anything from comical to a general ‘whoopsie’ that wasn’t meant to happen but ended up making everyone on set crack up just because it was hilarious.

Obviously not everyone finds the bloopers that funny since it takes a good deal of time to set up a scene and to make it work properly. But at the same time there’s nothing to be said against a moment of levity that can break the tension and possibly get the actors back on track after allowing them to have a good laugh. Even serious movies tend to have their moments when laughter is needed and is a good balm against the constant grind that can come from having to go through a scene over and over again. There are those moments when actors get frustrated since they either can’t hit their mark or deliver a line the way it needs to be done, but thankfully a good number of them tend to laugh it off and keep going until they get it right. This kind of thing makes a person wonder just how long a day can stretch out when gaffes such as this happen. The ability to laugh it off has a lot of value since otherwise people might just end up getting distressed and angry more often than not. On a show where the heroes are essentially the bad guys but are owned by corporations and are thus fashioned into the good guys by dint of being paid to do good things one can imagine that there are moments when things get a bit hinky and possibly heated, but otherwise it’s a show just like any other and things are going to happen.

It would appear that season two will see a few new faces and that a few new developments are under way to address the idea of the group of individuals that are trying to keep the heroes in line and how they’re bound to keep going about their business. In a sense it’s almost laughable to think that non-powered individuals would be trying to stymie the least desirable tendencies of beings that could tear them apart. It’d be like a low-rent Batman trying to keep a corporate-owned Superman in line in a way, with the man of steel being a jerk and more prone to being self-absorbed and less caring towards the people that look up to him. The Boys is a superhero show unlike a lot of others in that it gives a very dark view of heroes and at the same time doesn’t exactly paint the protagonists in the best of lights either. The show is more or less about two factions that are firmly set against each other, though it does feel kind of one-sided since the most powerful heroes are far more capable than their human counterparts and therefore harder to control.

Season two is already promising to be even crazier than the first one since what’s coming is apparently bound to flip Butcher’s world upside down and complicate things even further than they’ve already been. Hopefully we’ll be seeing a blooper reel for the second season as well since it’s very likely that the same mistakes might keep cropping up, or new ones might take their place simply because actors are human no matter who they’re pretending to be that day on camera, and things tend to happen whether people want them to or not.