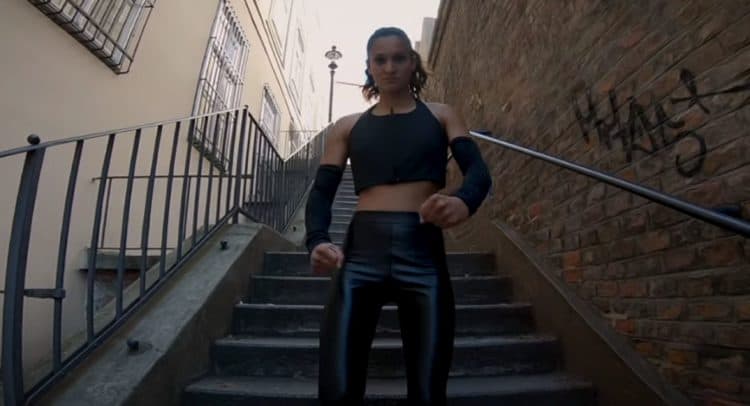 That’s definitely interesting, and kind of creepy to be certain since waking up in a strange place with no idea of how one got there and then finding that you’re being kicked down the stairs by some sort of quiet, intense individual that doesn’t appear to feel pain would be unsettling. The short clip is a nice example of parkour though since if one isn’t bothered by the slightly shaky camera work this is pretty cool to watch since as easy as it looks, parkour does require a good amount of strength and coordination, not to mention balance. The gist of this is that the guy simply can’t get away since the woman keeps showing up and she’s obviously not going away, as her level of stalking is supernatural in a way and the fact that she packs a heavy hit is hard to deny. But her eerie silence is kind of unnerving since it would likely spook anyone when she continues to follow them and won’t say anything, and will only give that dead stare that could mean just about anything. But this is what makes the short clip kind of cool since it leaves the imagination open in a way to theorize just what’s going on and what the real motivation is for the story that lies within the clip.

The running is pretty simple to figure out, he’s trying to get away and can’t figure out how she keeps catching up to him, especially when she appears behind, and then in front of him. There are so many different stories that could be told using this clip that it’s kind of hard not to break into one at this time since it would likely ramble on for a while. But the scene inside the house, when the main character is tied up and spots a table with several sharp and blunt instruments on it, is kind of easy to explain in a very rudimentary way. It would indicate that the Terminator-like woman was attempting to procure him for someone that wanted to ask him a few questions in a very convincing manner, or perhaps she was planning on doing the questioning. But it’s still open enough that many people could likely write an entire story based on this scenario alone. When you think of it, there aren’t a lot of elements needed to tell a story, since much of it can be filled in from something that we see or hear, and it’s very possible that this short movie could be turned into something that would be easy to watch and highly entertaining since the action alone is pretty cool already.

Parkour in an action movie is impressive since the freerunning technique is something that is very energetic and can impress a lot of people. It does become easy to overuse it though as it’s been seen in a couple of movies since the idea is one that is effective when showing a hero or a villain using it to evade or somehow escape their opponents. Watching someone run for a good chunk of a movie though would be a bit too repetitive unless there was a way to do it that would be seen as dynamic and conducive to something other than getting away. The movie Brick Mansions is a good example of this since the main protagonist is seen to be running to get away, but is also using his environment to whittle down the number of pursuers that are able to continue the chase. In that instance, the whole idea of parkour and freerunning was great since it wasn’t overused in such a big way and it was also integrated with a very effective fighting style that was seen to be highly effective in a movie setting. In real life, it’s hard to say if such a thing would be possible since parkour and freerunning really depend on the environment and the training of the individual since like it or not, in a forest setting or in a wide-open space, there’s less opportunity for some of the cool and very impressive movements and techniques that might be used in a more urban setting. Plus, unless a person has been training for a while, a lot of the impacts that are endured in parkour are bound to take the breath from some people and cause serious injury. Also, take into consideration that not every attempt goes the way it should, since those that are seen in the movies are the end result of everything going right.

While some individuals that practice parkour religiously can execute such movements without any difficulty and look absolutely flawless, just keep in mind that at one time they failed a few times and likely had to recuperate from injuries sustained during training. It’s not as easy as it looks in the movies.