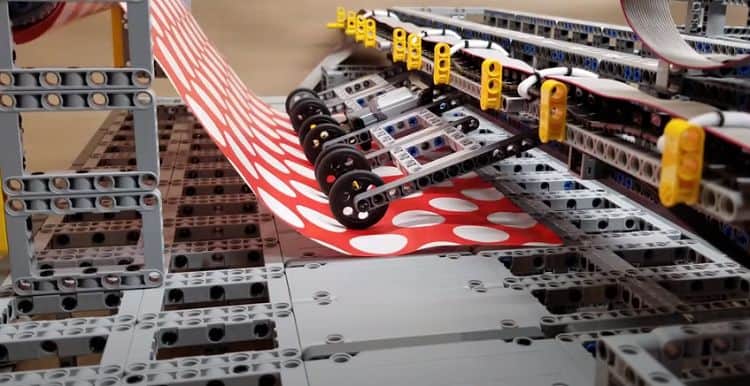 Somebody really likes working with Legos. One might wonder just how much can be accomplished with ELgos but it would appear that someone out there was up to the challenge and than willing to show them. There have been several videos made like this in the recent past and they’ve all been pretty impressive to be fair since they’ve all performed the tasks they were created for. Granted, they’re good for small operations that don’t require a great deal of difficulty, but it’s still interesting to think how detailed these contraptions have to be in order to work as they need to. Putting bigger boxes on the line obviously wouldn’t work, but it’s easy to think that whoever built this would be able to build and even bigger system that might allow for a wider variety of packages. One does have to wonder if the integrity of the structure would start to break down upon being made bigger however, or would require something a bit more stabilizing than Legos. Given that plastic can do some amazing things it might be that it would work, but it still feels as though more reinforcement might be needed at some point. But in its current form this definitely works and it’s something that would certainly amaze and amuse a lot of people, especially when it comes time to wrap gifts.

A lot of people are great at wrapping gifts since to be fair it’s simply cutting and folding paper around an object, and while some boxes and containers pose a bit of a challenge, many people are usually up to the task since they happen to like wrapping things before giving them to someone. But this would be perfect for someone that doesn’t like wrapping gifts and is giving things that come in smaller boxes. As I mentioned, the system would need various settings in order to be truly versatile. The basic design behind this thing is great though since it covered pretty much every angle, including the adhesive that was needed to close up the flaps. There are those of us that really don’t like wrapping largely because we don’t know how much paper to cut, aren’t good at folding neat, crisp lines, and probably use too much tape. It’s okay to admit it, some of us likely used old newspapers sometimes to wrap gifts if we didn’t have paper, and there’s no rule against using old boxes and tissue paper or packing peanuts, or even whatever tape you can get your hands on. Using glue might be a bit too much for some folks since some packages are hard enough to get into, but duct tape is perfectly okay if it’s what you have.

One has to wonder how long it took to build this thing and how much of an engineering background one might need to make sure that everything works the way it should considering that there are a lot of moving parts to this thing that have to work just right and work in tandem to create this effect. It’s easy to think that everything has to be down to the millimeter in order to make sure there are no jams or mistakes that might happen occasionally, since trailing edges of paper can no doubt cause quite a problem if left alone. There’s also the idea that this thing would need fairly regular maintenance if it were to be used on a regular basis since the stress placed on it in certain parts would likely begin to wear it down like any good machine. But just look at it from the angle this video provides is impressive and it’s easy to feel a bit jealous since a lot of us might like to have the skill and know-how to put something like this together, especially for other reasons that might be practical for our lifestyle. There a lot of different applications that this kind of skill could be used to create and it’s fair to state that anyone with this kind of skill shouldn’t have any problem finding a job with the right employer that needs this type of genius.

Of course, this kind of thing is how innovation really gets going since when one looks back at history and whoever made what, they started out with an idea and created something that would eventually make their lives and the lives of those around them a little easier in some way. That’s the beauty of invention really, since in its purest form it’s a way to help people get through their day in one way or another by helping them out where it’s needed and offering a bit of creative aid with tasks that might otherwise take a great deal of time. So wrapping a present doesn’t really take that long to be sure, but it’s still fun to see someone come up with something like this.