Home
Movies
Check Out This Honest Trailer for the New Aladdin 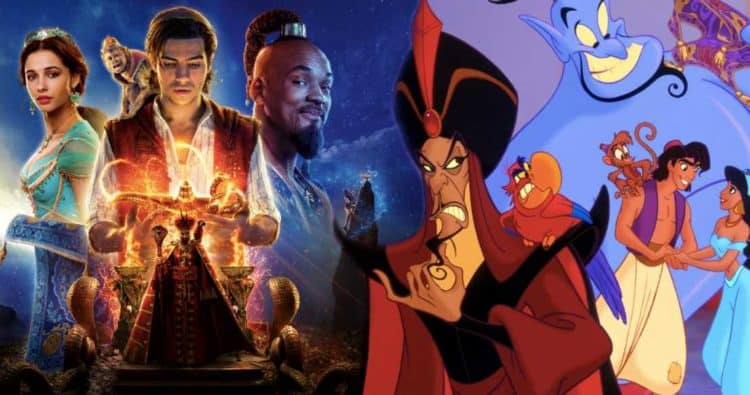 Does anyone else feel like we’re getting snowed by Disney with these live-action remakes? Yes, no? The point is that Honest Trailers should be opening your eyes a little wider to the facts that you see but don’t see since the movies, great as they can be when it comes to entertainment value, do kind of fall apart when you look at them from a different point of view. Haley Cohen of Study Breaks goes so far to state that there are a lot of things that people tend to like about the animated movies that are way too different in the live-action versions. That’s why a lot of us tend to ignore the whole reason and logic business when we’re watching these movies since we don’t want to see behind the curtain even if we say we do. People want to be amazed, they want to be thrilled, enchanted, horrified, disgusted, and any other emotion that can be tweaked and brought to bear when a movie is shown on the screen. The live-action remake of Aladdin does feel kind of like a cash grab but it also feels a bit obsessive compulsive on the part of Disney since it would appear that they’re trying to do just about anything and everything to continue the cash flow given what they’ve been spending throughout the years to acquire and use various other studios that have continued to expand their reach and their profits. Some would argue that this is the only natural progression that makes sense considering animation, though still popular, has become something that’s just not enough for some people.

Folks want the magic to be staring them right in the face and they want to see it dance and sing in front of them. Obviously Aladdin did well in the box office and banked a lot of nostalgia and how it worked with the changes that were made. Not everything could be put in since the animated version might have had, cover your ears, themes that aren’t allowable in this day and age. People seem to forget that Disney movies have always dealt with more adult themes no matter that they’ve been geared towards children, as a city in the Middle East, fictional as it is, that practices the same Middle Eastern customs as various cultures of today and in the actual past, seems like it would be a less magical place and a much harsher one than what we see. Agrabah obviously isn’t perfect in the movie but it’s also a much looser society than one might think is possible in the real world because, well, movie reasons. Seriously, that’s what it seems to boil down to since explaining away the most obvious gaffes in society when it comes to movies tends to get overlooked or introduced to a serious deus ex machina moment that makes everything better and thereby cleans up any potentially messy story line that might occur. This is a common theme in Disney movies since no matter how much of a bind the writers tend to get themselves in they come up with a perfect way to either sweep it under the rug or somehow develop a cure-all that can come along and make everything better. That’s not to say that the hero or the villain never struggles, but there tends to be a lot more short and sweet solutions than there are twisting and winding story lines that kids might not be able to follow.

In other words, Disney is into simplification in a big way, which isn’t bad but can be a bit too easy for any movie that they’ve made. Aladdin is a great story, and one that has likely inspired a lot of people despite the idea of not being able to escape being poor so easily. But the live-action movie still causes a few hackles to rise since, as Josh Lezmi of CheatSheet would agree with, not only is Will Smith not a perfect stand-in for Robin Williams, rest in peace, but the cast is made up of virtual unknowns that don’t seem to contribute all that much to the movie. This can be argued with ease honestly but the truth is that without whitewashing, which would ruin this movie, it was still possible to find faces and names that people would likely know since there are plenty of darker-skinned individuals that either come from the Middle East or can trace their lineage to that part of the world that would have worked just as well. Aladdin, Jasmine, and Jafar are not hard characters to cast, and in fact one of the only really hard characters would have been the Genie, but of course Will Smith offers the type of energetic performance that wasn’t Robin Williams by any means but was still seen as dynamic and capable of being accepted by many fans.

Overall this movie wasn’t horrible and it’s managed to reach a lot of people that have spoken highly of it. But for those that enjoyed the animated version and Robin Williams’ addictive energy, it’s probably a close second when it comes to being a favorite.