Home
Music
Check Out This Interstellar Theme On The Accordion 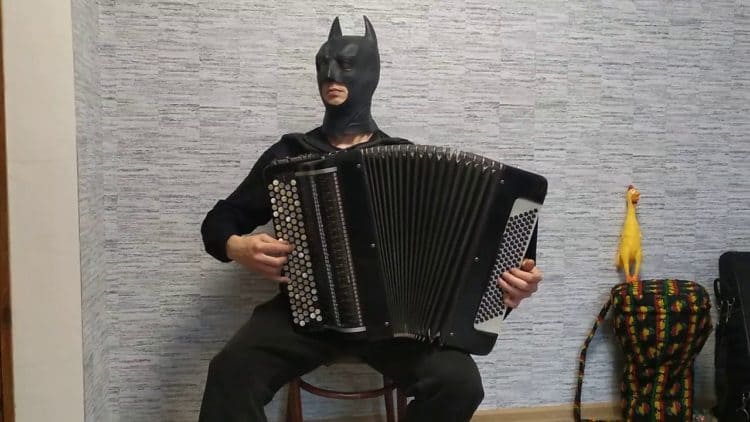 If anyone says this is easy without being able to play the accordion, go ahead and snort in derision. Normally I’d say slap them, but that sounds a bit extreme for something like this. But listening to this theme from Interstellar on an accordion is something that some folks might think is a tad bit annoying since the whining timber of the instrument isn’t to everyone’s liking, but it is still haunting and rather impressive in its own way since just thinking about how many keys a person might need to be able to memorize for this type of instrument and how long it might take to really get down is mind-boggling. The music itself is kind of nice, but again, if you don’t like the sound of the accordion it’s bound to be hard to get into the overall sound, especially at the end since one might be thinking ‘just make it stop’. After listening to the actual Interstellar theme you might find that the accordion is a bit too harsh to listen to, but some folks actually enjoy it and think that it’s something special. Hey, to each their own, but learning the dang thing and how to play different tunes on it definitely requires someone with a lot of patience.

It does make a person wonder how many other tunes this person knows how to play on the accordion and how long they’ve been playing. Obviously, this is not an instrument that a person just picks up and starts playing without any training, since finger placement and how to move the instrument in and out to get the desired effect is something that a person might need to spend a good time practicing before the music becomes a part of the lesson. Kind of like a bagpipe, the dynamics of the instrument need to be fully understood before it can be utilized in this manner. It’s likely that this individual has been playing the accordion for a while, and can either read music or can play by ear as a lot of people can do. Reading music is interesting to learn and can take a person far in a musical career, but those that play by ear are just as impressive since they can pluck notes out of the air as some would say and replicate them without ever knowing what they are. This kind of talent is amazing, but it’s not always reliable since knowing the structure behind the music is sometimes very important in order to get a full appreciation for it. Those that can read music and play by ear are often among the most talented since they know the importance of both styles and can call upon either when it comes to creating or replicating a piece. Having taken Music Appreciation in college it’s easy to say that being able to read a piece of music is an invaluable tool, but sometimes going off and freestyling by trying to make up a piece of music is a lot of fun as well, since it’s almost like a journey to find something you didn’t know you were looking for.

When replicating someone else’s work, as was done here, playing by ear is useful, but it’s not quite as reliable since it could produce something quite different than the original piece. This isn’t a bad thing to be clear, but when stating that it actually is one piece of work and making it sound like something else, some people might call out the musician on their error. Many upon many musical pieces have sheet music that can be read and reproduced by just about anyone that has the know-how and the patience to do so. Music is something that a lot of people enjoy, but those that learn how to play an instrument are usually those that manage to impress a lot of people since it takes time, patience, and a lot of practice in some cases. There are those people that are easy to be envious of since they can pick up an instrument and within a short time be playing as though they’ve been practicing for years, but such individuals are pretty rare even if they’re not unheard of since for one reason or another they’re able to simply pick something up on the fly and roll with it. Admit it, a lot of us have known at least one or more people like this in our lives, and it’s very, VERY easy to be a bit jealous of them since the rest of us often need to practice an instrument until our fingers are blistered and bleeding or our breath is coming in faint whistles from trying so hard. But even with that in mind, practicing on an instrument until one is this good is a joy, and it’s worth it.