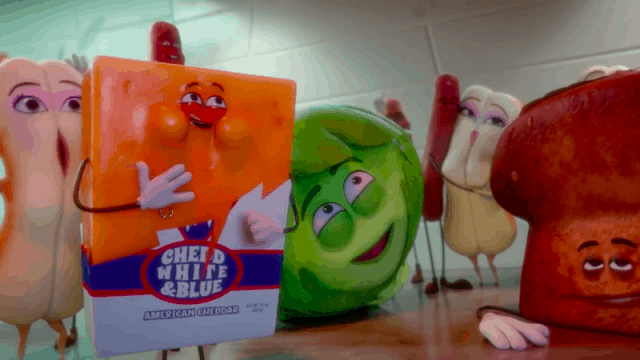 So Deadpool broke the mold by taking the comic and superhero genre and getting it filthy.Â  A few years ago “Ted” decided to turn a cute little fuzzy bear into a disgusting potty mouthed degenerate.Â  So I guess it was just a matter of time for Seth Rogan to take the concept of talking food and make it lewd.Â  At least that’s the premise behind his new CG animated movie called Sausage Party.Â Â  But people (including myself) are wondering if the trailer takes it a little too far?Â  I mean the title of the movie is already giving it all kinds of double meaning which we all know about.Â  Anyway, you check out the trailer below and we’ll analyze after.

The reality is that this movie would more than likely work better as a short film. Plus the trailer almost makes you feel like this is some kind of parody or something that you might see on Funny or Doe.Â  Seriously do you think you can sit through more than 10 minutes of this let alone over an hour? I mean I get it. The concept of putting a human emotion into food is kind of funny. I understand the feelings that a talking piece of cheese would be going through as it’s diced in a cheese grater, but do we really need this?

And I’m not ignoring the elephant in the room which is a ton of foul language and sexual connotations. I know that Rogen wouldn’t have it any other way. However, I’m still asking myself the question, “Do I need this?” I think we all needed Deadpool for the mere fact that superheroes have human elements to them, so adding in vulgarity was natural. Ted was fine but ultimately a little too raunchy. But Sausage Party doesn’t feel like a winner to me.