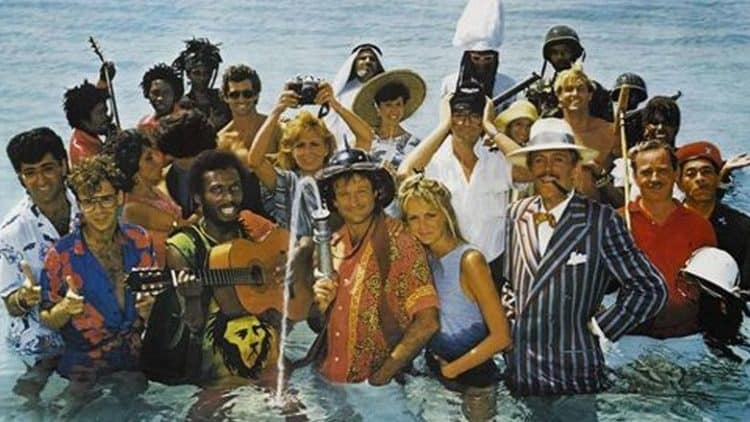 Any movie in which you see the pilot jumping out of the plane once it’s landed and being so grateful that he kisses the ground is bound to be a hilarious good time or a depressing tragedy that’s bound to make you glad that it’s just a movie. With Club Paradise, one of the long-lost 80s comedies that was cheesy but all too funny, it’s simple to see why it was forgotten since it was going up against other movies like Big Trouble in Little China at the time and just couldn’t keep up. But apart from that the cast and the whole idea of it were great since Robin Williams led the charge and was joined by the likes of Peter O’Toole, Rick Moranis, Eugene Levy, Twiggy, Jimmy Cliff, and many others. It’s interesting to note that the lead role was initially going to be given to Bill Murray, but he turned it down and so Williams was tapped for it. In truth that might have been the best idea possible since while both men proved themselves as comedic legends, Williams definetely has a bit more of an energetic lean that Murray doesn’t always exercise.

The story centers around retired firefighter Jack Moniker, a man that after being injured on the job uses his disability fund to buy up a small area on the island of St. Nicholas. As he tries to set up a successful Club Med-type of vacation spot he finds that it’s not quite as easy as he thought it would be and the challenges continue to mount even as he and Ernest, played by Jimmy Cliff, start to see people coming in to vacation. Things are only made worse of course when a developer comes along and tries to sabotage their efforts by making sure that their business begins to fail. The whole plan of the developer is to get Jack and Ernest off the land so that they can build a casino resort, but of course things turn out the other way as Jack gets the upper hand eventually by enlisting the aid of the governor of St. Nicholas, who is played by O’Toole. It’s one of those goofy 80s stories that pits a wise-cracking individual up against a determined and ruthless businessman that will do anything to get what he wants and ends up being driven off by the good guy in the end. This kind of story was designed to produce laughs and an overall good feeling back then just as it is today to be honest, but the style of filming and even the dialogue have changed enough that the effect is barely ever noticed any longer.

What’s really funny though is that the writers of today could learn a thing or two from those that were writing comedy back in the 80s. In fact some folks from the 80s who were writing comedy might still be around, but if they’re in the business it would seem that they might need to go back to the days when comedies weren’t just for shock value and to see who was paying attention. The comedies of the 80s were cheesy as hell, that much is true, but they were also well-developed and had a well-defined story to them that didn’t always rely on one type of gag or the way they could shock the audience into a laugh. They told a compelling tale that without comedy might have still be interesting, but with comedy was something even better since it created a dire situation but still allowed it to be light and airy enough to be hilarious.

There are comedies today that are genuinely funny, but then there are those that seem way too formulaic and lack the kind of passion that was developed decades ago when it comes to making people laugh. Argue all you want, but despite the idea that there’s a formula to comedy, there’s no set formula for making people want to laugh. Robin Williams managed to do this in a way that was both understated and so over the top that you had no idea what was coming up next. All you knew was that when he was on he was funny and when he was calm then it meant to pay attention as the story was being told. Together with an iconic cast he managed to create a movie that was both rich in comedy as well as in worthwhile story, but was unfortunately competing for a spot in the public eye with movies that were a lot flashier and also had big-name stars that were trying to get the same kind of attention. When you look back at any decade you’ll see a lot of movies that didn’t get the attention their directors wanted, but if you look a little closer you’ll find movies like Club Paradise that actually deserved it.