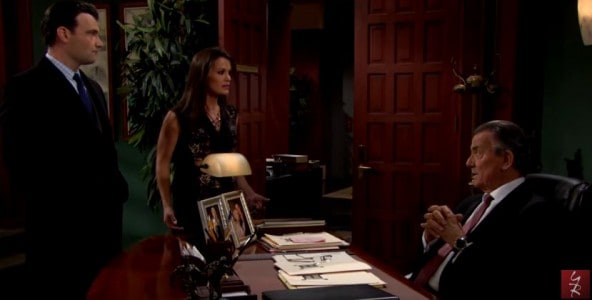 On Friday’s The Young and the Restless, one family will celebrate a miracle while another begins to understand that the worst has come to fruition. It’s been a long week filled with drama, tears and sadness, but it appears that all that is over. On Friday, spoilers indicate that fans will get to spend the day with the Abbots, with Chelsea and with Kevin. But why? Why are we spending so much time with Kevin on Friday when we’ve not been too worried about him and his scheming ways much in light of other happenings?

It’s a good news/bad news situation for Kevin. The good news is that Billy is improving. Removed from life support, he did not die as the doctors and his entire family thought he might. Quite the contrary, in fact; he’s thriving. His condition improves every day, which means things are looking up for his overall health and for his family and their broken hearts. However, Kevin is worried about the position he will find himself in should Billy wake completely up and find out what he did behind Kevin’s back with Victor. Now he finds himself in a situation he cannot win in; anger Victor by attempting to back out of their deal or anger Billy by sticking with it.

It seems to us that sticking with it is the answer right now. Billy and his family will be furious when they find out, but Billy is currently in no position to do anything about it and his family is a bit too busy at the moment to bother. Victor, on the other hand, is dealing with drama from every angle; his wife, his son and alleged criminals. He is more likely to take immediate action against Kevin for backing out than anyone else. It’s probably Kevin’s best interest to own what he’s done and move on as quickly as possible. That does not stop Mariah from worrying, however, and that’s another point of contention in Kevin’s life. 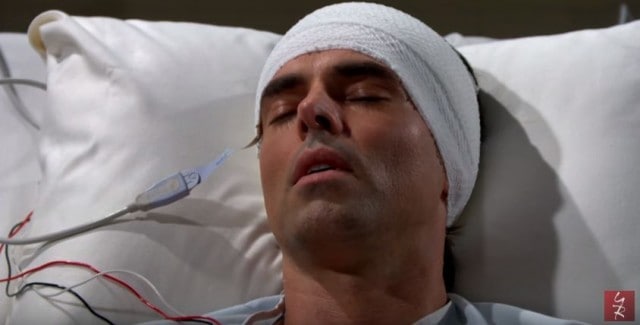 Friday brings us something of a miracle at the hospital for the Abbots. Not only is Billy still alive and showing signs of improvement, Friday’s spoiler video shows him speaking to Victoria. It might be only two words, but those two words are enough to change their lives forever. The rest of the family will be overjoyed by this, and we guarantee that the drama will be forgotten. Will the family ever tell Billy that his brother decided to pull the plug or that his mother thought her son did not love her enough to leave her in charge of his living will? Will he learn that his business deals are being jeopardized? He knows Victoria’s name in the video, so we don’t think that there will be too much worry over his brain function or memory, but these accidents and comas like this have serious consequences and this might just be the beginning of some major changes in Billy — aside from his face.

While the Abbots celebrate, Chelsea is fearful and worried. Adam did not make it to Spain, and her suspicions that there was something bad happening with his trip were on point. She is the only one at the moment, however, that seems at all concerned for his wellbeing. Victor shows little care in the matter, and Victor is not exactly known for being very helpful in many situations. Could he be deterring Chelsea because he is behind the kidnapping of his son and is looking to keep her off the trail for as long as possible while he hides the evidence? We don’t know this for certain, but the suspicion is certainly there.

Spoilers tell us that Chelsea will find help elsewhere since Adam’s father isn’t making it easier on her, but that’s when she’s going to find out a few things she doesn’t want to know. Is her marriage on the rocks? Is her husband missing as she believes he is (he is) or did he run off because he was no longer interested in her? She’s got faith in her marriage and her suspicion that Adam is missing and something terrible has happened, but someone wants her to think that he just ran off. Is it Adam’s father trying to throw her off the scent of his son? Tune in Friday to find out.