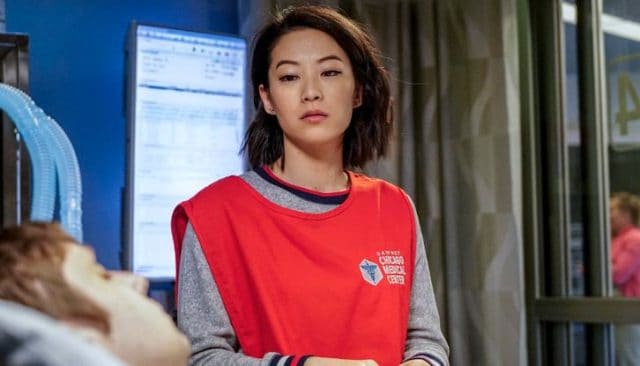 There are no good ways to make a life-or-death decision. This week’s Chicago Med had several cases which convinced the doctors they could have it all, give it all. But that’s not how the odds work. You can’t always give the patient what they want and what they need at the same time. It’s not a bad thing to have faith in good outcomes, except when it turns to arrogance that leads to fatal outcomes.

I so wanted to give Choi’s sister a pass on the way she’s living her life. After all, Emily has been making inroads with her brother, and showing some responsibility working at the hospital. April has been more supportive of Emily than Ethan Choi, but she suspects that Emily hasn’t been as up front as she could be. April is even more suspicious when Emily’s friend’s overdose coincides with meds going missing from the hospital. Emily denies it, but quits when her brother doesn’t believe her. By the time Choi realizes his sister was innocent, she has already disappeared. But April later realizes that Emily was, in fact, guilty. Was it really better for her to leave, or should she have stayed to face the music?

The Chicago Med cardiothoracic team is already facing an enormous amount of pressure leading up to the conjoined twins surgery. They really can’t afford any losses right now. Dr. Rhodes was kicked off the twins’ surgery because he convinced the parents to take a chance on saving both of their children. Every other surgeon asked him not to get their hopes up, but he still believes in having it all. We’ll see if his faith is rewarded next week, because it wasn’t in this one. He did everything he could to honor a pregnant woman’s wishes during surgery. In spite of a life-threatening heart condition, she wanted Dr. Rhodes to try to save her baby too. After running up against multiple complications, Rhodes lost both mother and child. The loss traumatizes Rhodes to the point that he decides to take himself off the conjoined twins case. He knows he can’t have it all, and he can’t give it all.

But that doesn’t mean he shouldn’t try when others are willing to take the risk. Dr. Manning put that instinct forward and she was right. She ended up saving a little boy from a rare illness because she followed her instinct. There’s just such a fine line between instinct and ambition, it’s not always easy to tell the difference. At least Manning and Halstead are in such a good place that Halstead plans on proposing.

Dr. Charles was damned from the second Dr. Reese’s dad walked into his office. Robert Haywood is a diagnosed psychopath. That much is certain. But lack of emotions is a long way away from an act of violence. Yet that’s exactly what Dr. Charles is considering. A mysterious package shows up on his doorstep, filled with circumstantial evidence that Haywood may be responsible for the disappearances of multiple coeds. Dr. Charles doesn’t know what to make of the evidence at first, until he gets access to Haywood’s personal files. Once he sees what the man has been hiding, Dr. Charles realizes this might be true.

Will Dr. Rhodes and Dr. Charles be able to come back from the lines they’ve crossed, or were they right to follow their instincts?