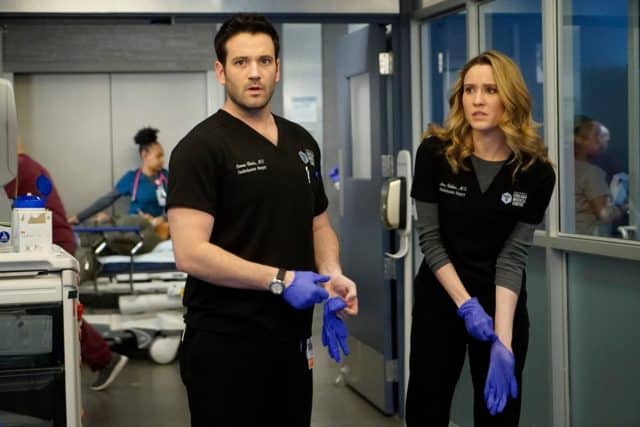 One of the most notable comments that came from the Parkland and Las Vegas shootings came from the hospital staff who treated the victims. Hospitals are not prepared for that type of mass casualty event. There are not enough resources, not enough supplies, not enough staff. Sometimes there isn’t even enough room in the Emergency Department to fit that many emergent patients. But when the victims have nowhere else to go, hospitals have to make do with what they can, and just pray it’s enough. Chicago Med should be applauded for devoting an entire episode to the doctor’s perspective on this issue.

When a shooter opens an automatic weapon in the middle of the park, it’s all hands on deck. That means everyone, regardless of specialty or level of experience. Even Dr. Charles and Ms. Goodwin are in the thick of it. We’re talking about a psychiatrist and a retired nurse who are getting their hands bloody because they have no other choice. And the patients come in too fast in too many numbers. At one point, Dr. Rhodes even has to use the doctor’s lounge as a temporary operating room because all of them are full as well. The only way to possibly keep up is to throw the rule book out the window. Dr. Latham had the hardest time with this. As a man on the spectrum, and as a surgeon, all he knows is the method. Chaos is particularly troubling to him. Luckily, Dr. Rhodes snaps him out of his usual routine quickly by forcing him to accept a new one. A routine is a routine, even in the middle of chaos.

That’s where Dr. Choi comes in. From his time in the military, he knows that during an incident like this, you can’t have doctors scrambling to find patients. At his suggestion, Dr. Goodwin overrides protocol and switches the entire order of the ER so that patients are divvied up according to the treatment they need. It’s a smart plan, one which shouldn’t have had to be implemented in the middle of the situation. Unfortunately, the frequency of attacks is such that hospitals may have to rethink their plans.

Dr. Charles’s job is not only to keep the patients calm, but to try to assess what they saw so that the police may identify the shooter. It takes awhile, but this is exactly what he does. Most wanted to save the shooter since he tried to let himself off the hook for his crimes by hiding in plain sight and then slitting his wrists. Some didn’t care if he lived or died, and to be the one who encourages the former is a tough position to be in.

I don’t know how Natalie kept it together through the day. For hours she thought that her own child had been at the park, and she was right. There are no words to describe that terror, especially when you have to stuff it down in order to do your job. But she made it through the worst of the casualties, and Will got her son back to her as soon as he could. They were at the park, but ran out before they could get hit.

It would have been easy for Chicago Med to go the route of a shooting in or around the ER. It’s happened in other medical shows. The show could also have followed the story from the chaos of the shooting itself to the doors of the ER. That’s been done too. What the show wanted to focus on was the unrealistic demand on hospitals in the aftermath of a mass shooting. By isolating that part of the story, the writers set this show apart in the category of shows which highlight gun violence and/or mass casualties.

Chicago Med looks at the effects of a mass shooting through a particular lens that needed to be addressed.