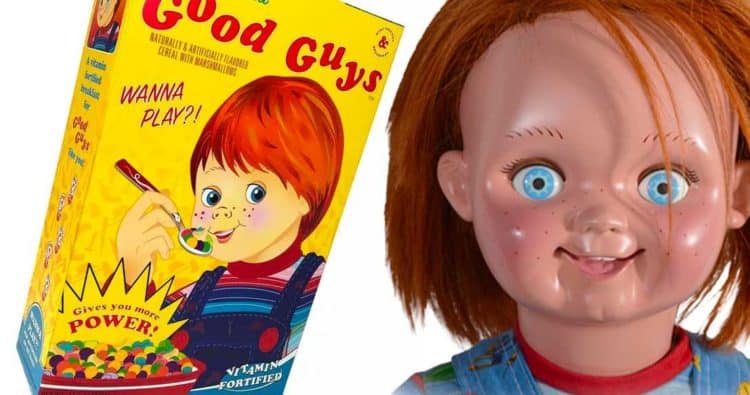 Be honest, when you watch a movie or a TV show and they use a fictional food like Good Guys cereal, you kind of want to know that you can go out to the store and find some, right? It’s kind of like the Big Kahuna burger from Pulp Fiction, diehard fans were just aching to know where they could get one. Well, the good news as Kevin Burwick from MovieWeb tells it is that now you can actually buy a box of Good Guys cereal from FYE for about $10 give or take a penny. It’s best to not buy it from third-party sellers since they’ll likely charge you triple for the novelty of it and to keep their own costs down, but if you do decide to purchase a box of the sugar-coated goodies then you’ll be able to say that you own a box of your own from the famed Child’s Play movie of three decades past. Just think, in another 30 years something from the rebooted version might actually be worth a lot of money.

Of course spending $10 on a box of cereal seems a bit nuts but if you’re fan it might be the most reasonable thing in the world. Let’s face it, fans of movies tend to buy some pretty ridiculous stuff at times since they want a piece of the show that they can remember and look at for their own reasons. But a box of cereal seems a bit, well, odd. Some folks have taken to making their own box while others are excited for this opportunity to own a piece of movie history. Of course the trick is that you’ll own a replica of movie history as it’s likely that the actual box of Good Guys cereal could be safely stored away in a movie vault somewhere, never aging and never breaking down considering what might be in it. Seriously, think about that, with the preservatives that are put into foods now it’s likely that the cereal would still look just as appetizing, but it might break every tooth in your mouth.

Child’s Play was a rather iconic movie for its time since a lot of people thought that it was going to replace such favorites as Nightmare on Elm Street and other slasher movies since the idea of a doll being possessed by a malevolent spirit is something that’s inherently creepy. The statements that were made about this however are kind of laughable now from a fan’s standpoint since comparing one movie villain to another brings up an entire discussion of everything from their origin to their physical and mental attributes that can’t really be measured since, well, they’re fictional. For instance, pitting Chucky against Freddy from Nightmare on Elm Street is kind of a joke really since despite the fact that the original Chucky is a spirit inhabiting a plastic body, there’s not a lot to say that Freddy couldn’t find a way to bring that spirit into the dream world and do something particularly nasty to it. Plus, in the dream world, if Chucky can even enter it in his doll body, there’s not a lot of chance that the psychotic doll would stand up to the psychopathic killer. Yes I know it gets insanely goofy when you really start thinking about it, but fans tend to eat this stuff up.

With all that in mind it’s funny that the cereal would be what we’re talking about, but it’s still worth mentioning since it’s one of the most prominent things that people might have noticed when young Andy was first seen in the movie. If you’ll remember he was making his mother breakfast in bed, attempting to butter her up so that he could possibly open up the huge, wrapped package we saw in the home that he was hoping against hope was a Good Guy doll that he really, REALLY wanted. Anyone remember that breakfast? It was burnt toast with a huge scoop of butter on top, a bowl of Good Guys cereal that was so full it sloshed over the side with each step Andy took, complete with several heaping spoonfuls of sugar, and a tall glass of orange juice that added to the already mounting mess on the counter, the serving tray, and the floor. Ah yes, it’s the thought that counts though.

If you notice something else about that scene though, Andy is wearing a pair of Good Guys overalls and he’s watching the Good Guys TV show which shows a Barney-sized Good Guy that’s more than a little creepy talking to one of the new Good Guy dolls that can say three sentences and move their heads. The things we thought that were revolutionary as kids sure seem funny now don’t they? I wouldn’t be too surprised if next we hear that someone wants to replicate the big Good Guy outfit that was seen on Andy’s TV.